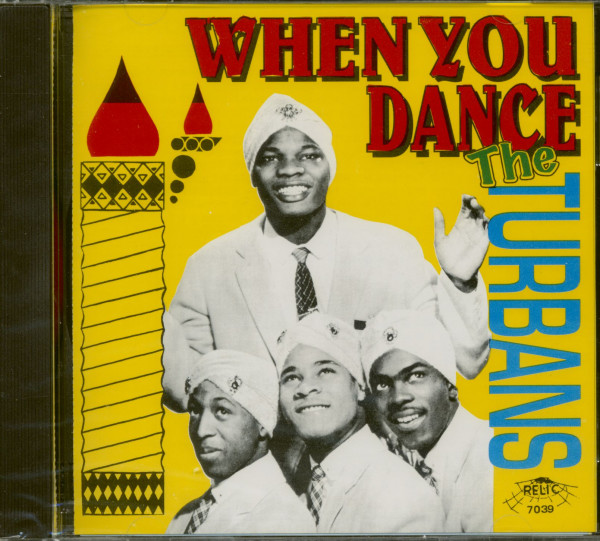 This article is deleted and can no longer be ordered!
Please inform me as soon as the product is available again.
P Secure bonuspoints now
Description
Learn more about TURBANS
Review 0
Description
more
Close menu

TURBANS: When You Dance

Article properties: TURBANS: When You Dance

Learn more about TURBANS
The Turbans Congratulations Having lit up the R&B charts in the autumn of 1955... more
Close menu
"TURBANS"

Having lit up the R&B charts in the autumn of 1955 with their gliding, Latin-tinged rocker When You Dance (it graces our '55 disc), The Turbans had been trying to recapture their commercial momentum ever since on Al Silver's Herald label. Lead tenor Al Banks, tenor Matthew Platt, baritone Charlie Williams, and bass Andrew 'Chet' Jones (a former member of The Parakeets, the same group The Silhouettes' Richard Lewis had sung with) ranked with Philadelphia's top groups, even if their Herald encores hadn't set the world on fire.

Sister Sookey, their first followup, did well regionally but missed breaking nationally, and their 1956 output - the savory ballad I'm Nobody's b/w the rollicking B-I-N-G-O  (Bingo) in the spring and the Latin-beat It Was A Nite Like This (written by Chet Jones' brother Donald) b/w All Of My Love late that summer - hadn't changed their luck despite being eminently solid. 1957 opened with a classy ballad penned by Donald Jones, Valley Of Love, and a hard-driving Bye And Bye on the opposite side. Banks got featured billing on the platter.

Congratulations, scribed by Banks (who quickly lost his featured status) and Robert Marshall, was a savory ballad showcasing Al's high-flying tenor, displaying a Clyde McPhatter influence along with a fair amount of falsetto over precisely picked guitar lines and fluid harmonies from The Turbans. It was issued in November of '57 with Platt and Chet Jones' slinky dance workout The Wadda-Do as a flip. That was it for the group at Herald.

Banks and Jones were the only originals when The Turbans gravitated to the Philly-based Red Top logo in 1958 for I Promise You, joined by Earl Worsham and John Christian. A half-dozen early '60s singles for Roulette (where they sang Burt Bacharach and Hal David's Three Friends), Parkway, and Imperial completed their discography, more members shuttling in and out but Banks was a constant. The enduring charm of When You Dance propelled it to #114 pop standing in 1961 when Herald reissued it as 'oldies but goodies' fever spread like wildfire. During the early '70s, Banks teamed with Charlie Thomas, Elsbeary Hobbs, and Dock Green in one of the best touring Drifters aggregations before dying much too young in July of 1977.