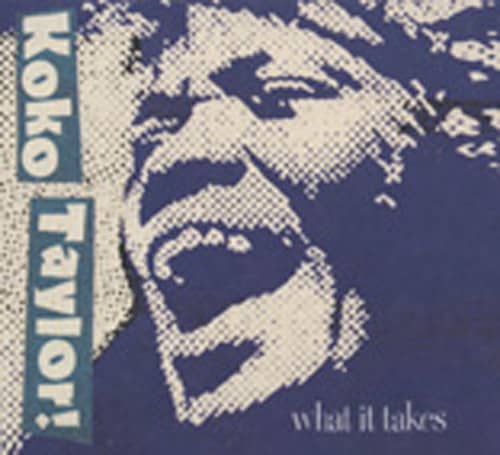 Koko Taylor: What It Takes: The Chess Years

Article properties: Koko Taylor: What It Takes: The Chess Years

Meanwhile, Alligator Records was flourishing as a local indie, having launched Hound Dog Taylor, Son Seals, and Fenton Robinson. Koko wanted to be there too, but convincing boss Bruce Iglauer wasn't easy. "I had to run him down like a hawk," said the late Taylor. "I said, ‘I'm gonna ask him one more time, and if he turns me down I ain't gonna ever ask him no more!'" Koko finally got her demo to Iglauer. "About three or four days later he called me. He told me, ‘I listened to your tape.' I said, ‘Oh? What did you think about it?' He said, ‘Well, actually, I liked them!'

"I was very hesitant, because up until that time I had worked only with player/singers," admits Iglauer.It turned out to be a musical marriage made in heaven. ‘I Got What It Takes,' Taylor's first Alligator LP in 1975, was nominated for a Grammy.‘The Earthshaker,' her '78 Alligator encore, found her backed by a particularly stellar edition of her Blues Machine: guitarists Sammy Lawhorn and Johnny B. Moore, bassist Cornelius Boyson, drummer Vince Chappelle, and guests Pinetop Perkins on piano and saxist Abb Locke. The set featured several numbers that became concert staples of hers for the next three decades, including I'm A Woman (her saucy retort to Bo Diddley's I'm A Man), Louis Jordan's romping Let The Good Times Roll, and the swinging Hey Bartender, introduced back in 1954 by L.A. jump blues pianist Floyd Dixon on Atlantic's short-lived Cat subsidiary and well suited to Koko's earthy, boisterous delivery.

"By the time we did ‘The Earthshaker,' I felt much more of a level of confidence with myself, and a level of confidence in my communication with Koko," says Iglauer, her longtime producer and manager. Reigning regally as Chicago's blues queen, Taylor made seven more albums for Alligator (the last one was 2007's ‘Old School'), racked up a trophy case full of Handy Awards and Grammy nominations, and overcame a serious bout with gastrointestinal bleeding that sidelined her for a lengthy spell in 2003. Koko returned to action and made a triumphant comeback, only to ultimately be fatally felled by the same malady on June 3, 2009.

"A few years back, they started calling me the Queen of the Blues," mused Koko. "I am one of the last people that you can name around today that's singing blues. We've got a lot of singers out there that got beautiful voices. They can sing better than me, some of ‘em. But they're not singing blues."