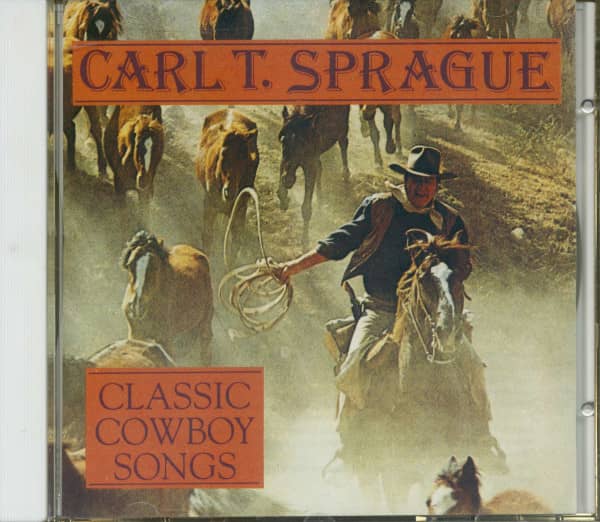 This article is deleted and can no longer be ordered!
Please inform me as soon as the product is available again.
P Secure bonuspoints now
Description
Learn more about Carl T. Sprague
Review 0
Description
more
Close menu

Carl Tyler Sprague was born on May 10, 1895 on his grandfather's farm near the town of Manvel, Texas in northern Brazoria County near Houston. William T. Sprague Sr. was a native of Massachusetts and a Union Army veteran who struck out for the west in the years after the Civil War. Sprague's father, William Jr., was born in Illinois and moved, with William Sr. to Iowa where he met Carl's mother Libby. The family was in Kansas in 1878 where a sister to William Jr., Irena Maud, was born. By the early 1890s the family was in Texas.

Indications are that William Sr. and his son were farming and raising cattle on land purchased from the Atchison, Topeka and Santa Fe Railroad which had acquired the Gulf Colorado and Santa Fe headquartered in Galveston, Texas, in 1886. According to the 1900 U.S. Census, the family was living in that area, about 37 miles northwest of Galveston. In the previously mentioned John I. White interview, Sprague said that his father's cattle business had been wiped out in the freeze of 1894 forcing William Jr. to work as a cowboy as far away as San Angelo, Texas in order to recoup his losses. Meanwhile the family remained in Manvel, living on William Sr.'s farm.

The 1900 Census also shows that five-year old Carl had an uncle married to his Aunt Irena by the name of Joseph Elijah Booth(e). Booth listed his occupation as stock raiser and it appears likely that he too was gone on a cattle drive when the census taker recorded the family's information. Only Booth's name, marital status and occupation appear on the record for that year. But he is an important part of the story for when young Carl T. Sprague was old enough to work on the trail drives it was from 'Uncle Lige' Booth that he learned the cowboy songs and poems handed down from men many of whom had been there when they were first sung.

"My uncles and I used to sit around the fire at night and sing their very same songs that cowboys sang many years before. I used to go on cattle drives with them and we'd make camp right there on the open prairie where there wasn't anything but cattle, horses, and stars," Sprague told White. Booth, who died in 1953, is buried in the Manvel, Texas city cemetery with the tombstone inscription, 'Gone but not forgotten'.

Sprague arrived in College Station in 1913 to study agriculture at Texas A&M. The school had been founded in 1878 as a land grant institution, and for Sprague, the son and grandson of ranchers and the nephew of a stock raiser, it was a natural choice. Any evidence that he sang cowboy songs for the entertainment of others prior to his enrollment in college has not surfaced. However as was the case in his later years he probably sang in church and other group gatherings. He seems to have languished in the academic field, having only attained the status of sophomore by 1917.

He hit his stride after a two year hitch in the U. S. Army Signal Corps during the First World War. Returning to Texas A&M in 1920, he graduated in the Class of 1922 with a degree in animal husbandry. During this period he was a left-handed pitcher for the baseball team and became a trainer for the football team. He was offered the trainer's position on a full-time basis upon graduation by the legendary Texas A&M and later University of Texas football coach, D. X. Bible. It was this latter assignment that earned him the sobriquet 'Doc' by which he would be known in the College Station and Bryan communities for the remainder of his life.

Sprague's interest in recording came about as a result of his hearing another Texas singer, Vernon Dalhart. Dalhart (real name, Marion Try Slaughter II) who had recorded for numerous labels, singing pop, novelty and Al Jolsonesque tunes, decided to give mountain music a try. Victor consented to record Dalhart singing The Wreck Of The Old 97 and asked him to pick a song for the B side. The song Dalhart chose was The Prisoner's Song and it was a major hit.

What sets Sprague apart from other cowboy singers of the day is that he had lived the part and dressed the part. The wearing of western apparel, especially a cowboy hat, in his publicity photographs and public appearances was the first widespread use of the cowboy image coupled with a singing performer. The image stuck and by the mid 1930s with the emergence of singing cowboys in the western movies it was firmly planted in American culture. Many hillbilly, bluegrass and country performers became 'hat acts' and dressed in cowboy attire. Though Sprague's career was brief he was the first to use the image to market his recordings...