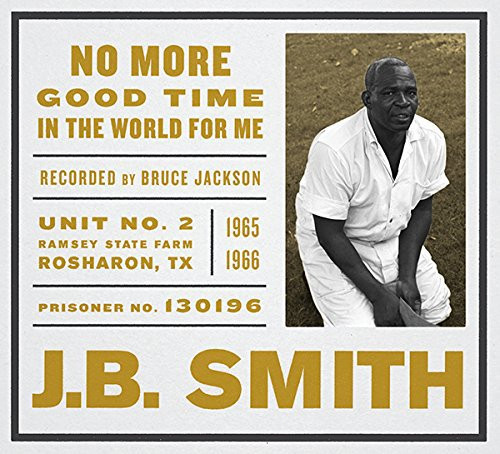 (2015/Dust To Digital) 18 tracks. In 1965 and 1966 Bruce Jackson visited Ramsey State Farm in Rosharon, Texas, where he recorded the remarkable epic songs of Johnnie B. Smith, a prisoner-composer doing a 45-year bid for the murder of his wife. Three of the recordings included on this two-disc set appeared on Ever Since I Have Been A Man Full Grown, an LP produced by John Fahey's Takoma Records in 1965. The other 15 -- traditional work songs and J.B.'s original pieces -- are issued for the first time. Folklorist Bruce Jackson was among the last to record work songs. He met Smith, prisoner #130196, during a 1964 visit to Ramsey State Farm. A native of Hearne, Texas, Smith was 46 years old and on his fourth prison term. In his younger days, Smith toted lead hoe in a flat-weeding gang and led the work songs. But he also sang other songs, different songs -- those he'd made up to occupy himself while chopping sugarcane or picking cotton. He referred to them as his 'little ol' songs.' The longest stretched to 33 verses, or more than 22 recorded minutes. Although Smith knew and sang a variety of melodies, to an assortment of work songs and sacred pieces, he employed only one tune for his compositions. What changed were the tempo and the ornamentation with which he individualized them. 'The Major Special,' 'No More Good Time in the World for Me' 'Ever Since I Been a Man Full Grown' -- each song Smith charged with it's own emotional ambience, as a seasoned preacher intuits the particular colors and atmospheres that should imbue each portion of his service. Smith was paroled in 1967, a year after his final session with Jackson. That summer, Jackson arranged for him to sing at the Newport Folk Festival, at which he appeared on stage with Pete Seeger, and, in one of the only photos that survives of him, in the company of Robert Pete Williams and Muddy Waters. No More Good Time in the World for Me includes 18 remastered recordings, 15 of which are previously unreleased, and is presented in a digipak with a 36-page booklet containing liner notes by Nathan Salsburg (curator of the Alan Lomax Archive), full lyric transcriptions, and never-before-published photographs of J.B. Smith.

Article properties: J.B. Smith: No More Good Time in the World for Me (2-CD)