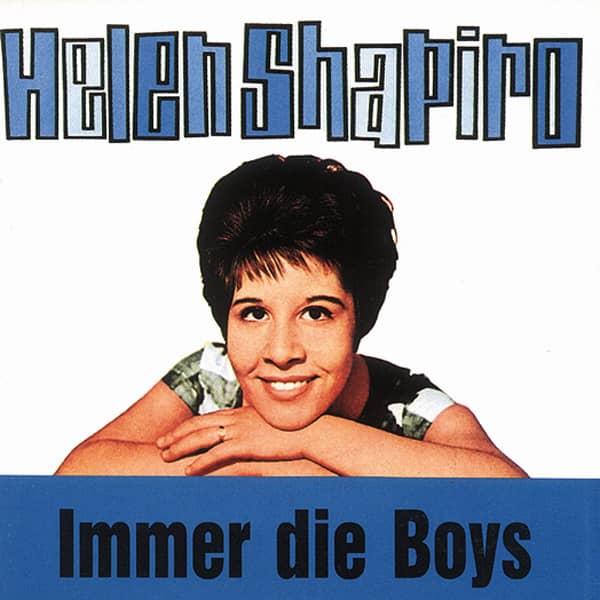 She was born Helen Kate Shapiro on 28th September 1946 in Bethnal Green, London, the granddaughter of Russian Jewish immigrants. Her parents were pieceworkers in the garments industry and she had a fairly straightforward - if underprivileged - working class upbringing, spending her early childhood in council house in Clapton. She attended Northwold Primary School followed by Clapton Park Comprehensive, where she picked up the nickname 'Foghorn', for the extraordinarily deep timbre of her voice..
By now it was apparent to everyone who saw and heard Helen that she was an exceptional prospect and at the age of thirteen she began taking lessons at The Maurice Burman School Of Modern Pop Singing, in London's Baker Street, where Alma Cogan had famously learned her trade. Once there she proved a fast learner, to the extent that after just six months, Burman was eager to show her off.

He approached EMI Records' Norrie Paramor and invited him to come and listen to seven of his students, with a view to perhaps giving them some advice. Paramor sent his assistant, John Schroeder, who duly assessed all seven but was transfixed by Helen - as he recalled, many years later: "...the door opened and she confidently walked in, gave the sheet music to the pianist, and launched into 'The Birth Of The Blues'. I say launched, because the performance was truly amazing. There was a touch of Jazz and Soul about her phrasing, as though she had been singing for years. She sounded so professional, and she was blessed with a voice that wos totally incomparable, so deep and rich in tone, and so full of emotion. The most astounding thing of all was that she was only thirteen-and-a-half years old!..."

The first thing Schroeder had to do was find out whether Helen sounded as good on record as she had at her 'audition', to which end he invited her along to Abbey Road's No.3 studio, to cut a demo. And when that demo turned out to be every bit as good as he'd hoped, the next step was to persuade his boss, Norrie Paramor: "You had to catch Norrie at the right moment. I put the acetate on his machine and watched his every expression. When it finished, there was an awful pregnant pause... then Norrie said, quite slowly and emphatically, while looking straight at me:1*mm, he is very good, isn't he?' I smiled to myself and answered, emphatically and very slowly indeed:'He is a she, and she is thirteen-and a half years Helen's family were hurriedly invited along to EMI, a contract was drawn up, and she was duly signed to the Columbia label, home of artists like Cliff, The Shadows, Shirley Bassey, Acker Bilk. Russ Conway. etc. As an interesting aside. Paramor wanted her to change 'Shapiro' to a less Jewish-sounding stage name, but Helen and her family demurred.

Meanwhile, as Schroeder soon discovered, it's all very well discovering raw talent, the difficulty comes in making something of it: "As time went on, Norrie and I found ourselves with a big problem. We could not find a song strong enough or suitable enough for Helen's debut single. The word had gone out to all the music publishers, and we were soon inundated with songs... but lyrical content was the problem..."

After six months they still hadn't found 'the right song' and were in grave danger of being in breach of contract, at which point Paramor suggested to Schroeder that he try writing one, as he was closer to Helen, musically, than anybody. A classically-trained pianist, John had never written a Pop song before but he rose to the challenge, approaching his friend Mike Hawker, a journalist who was good with words, to write the lyrics. The resultant 'Don't Treat Me Like A Child' was a revelation. Lyrically, it was spot-on. the perfect song to kick-start Helen's career - although, as she later recalled: "When EMI sent me a white label copy of 'Don't Treat Me Like A Child' I couldn't wait to hear it, but we didn't have a record player. We had to go around to a neighbour and listen to it on hers!"
Released in February 1961, the disc was cautiously well-received, although reviewers were clearly baffled by Helen's voice. It crept into the charts at the end of March and began climbing slowly, but once Helen had mimed to it on Thank Your Lucky Stars, it took off, eventually peaking at No.3, selling around 300,000 copies, winning her a silver disc. It also very quickly rolled out to become a significant international hit, with sales eventually reaching around 750.000 copies.

For a follow-up Schroeder decided on a change of style, and composed a much slower number, which Hawker wrote as 'You Don't Know'. Released in late June, it leaped into the charts and reached No.1 the first week in August, where it stayed for three weeks. UK sales very quickly passed 250,000 - her second silver disc - while international sales soon took it over the magic million copies, winning Helen her first gold disc.

By now, a mild dose of Helenmania had broken out in the UK and everybody seemed fascinated with her, Unlike most Pop stars she seemed unbelievably 'normal', coming across as unspoiled and level-headed in interviews - although her schooling, coupled with the UK's laws about working minors, severely restricted live appearances and would ultimately lead to her leaving school as soon as she was legally able, in December 1961  (she would headline her first-ever UK tour just weeks later, in January '62).

With this as a backdrop, an unique promotional opportunity unexpectedly presented itself, as Schroeder recalls: "Norrie was approached by Rank Films with regard to their 'Look At Life'series... Each programme took the format of a ten-minute feature film, which was shown at every Rank cinema across the country in conjunction with the current 'A' film. In this instance, Rank wanted to portray the making of a hit record - namely Helen's next single -from the time the song was initially conceived to it being recorded, released and promoted, and finally being bought by the public." (N B: this effectively became the template for that famous scene in Smashing Time, with Lynn Redgrave and Rita Tushingham).

So, let's recap: Rank wanted to film Helen actually in the process of recording her next 'hit record'. No pressure there, then!

Norrie and John shared a recent, rather painful first-hand experience of how perilous following a No. I record can be. The previous year they'd produced Ricky Valance's chart-topper 'Tell Laura I Love Her', and hadn't been able to get him remotely near the Top 50 since. But there was already something of a `softener' in place with regard to Helen's next 45; advance orders were around 100,000 copies (they would reach 300,000) so they were guaranteed a hit, whatever she recorded!

That said, they were painfully aware that the next one had to be a real blockbuster, to which end Schroeder took the decision to go uptempo and melodic, with strong singalong qualities, and Hawker came up with an excellent feel-good title in 'Walkin' Back To Happiness'. The song was almost unfeasibly commercial, perhaps made all the more so by the "Oop bah, oh yea yea" element in the chorus (which wasn't originally intended to be part of the lyric, but a musical riff, to be played by the brass section). Helen, ironically, preferred the flip, 'Kiss'n'Run', but she was soundly outvoted.

With such massive advance orders it was a guaranteed No.1 and sure enough it spent the month of October at the top of the charts, with worldwide sales topping the million shortly after the turn of the year. It became Helen's signature song, her-biggest hit, and the nearest she ever came to achieving a breakthrough in the United States, spending one week on the Billboard Hot 100 at No. I00!
Her first EP, Helen, followed in early November and spent 9-weeks at No.1 on the EP chart, as well as making a brief appearance in the NME's regular Top 30. Something of an incongruous release, it couldn't have been any more different to her singles as it featured Helen singing four Jazz-styled standards, including 'The Birth Of The Blues'. It appeared to be aimed squarely at the parents of the teenagers who'd been buying her singles (although presumably, this was the type of material she'd have preferred to be singing), and its success surprised both fans and critics alike.

However, by now 'the team' had suffered a major departure. Having been Norrie Paramor's assistant at Columbia for four hugely successful years it was perhaps inevitable that at some point John Schroeder would be poached by another record company, and the effect this had on Helen's career was devastating. Not only had his songs been of crucial importance in launching her, it was John who'd passionately believed in her, and who had thus far made many of the crucial A&R decisions.
Initially, it seemed that his defection might not be a problem as Helen's fourth single, 'Tell Me What He Said' (a Brill Building song, written by Jeff Barry, originally recorded by Ginny Arnell), reached No.2 while her first album, Tops With Me, was also concurrently occupying the No.2 spot on the LP chart. Around this time Helen also made cameo appearances in a couple of UK Pop films, Play It Cool and It's Trod, Dad! and for the time being, things were still looking rosy.
But her next release, Paramor's disastrously weak 'Let's Talk About Love', failed to reach the Top 20 and although another Schroeder/Hawker ballad, 'Little Miss Lonely', briefly restored Helen to the Top 10 in August '62, it would prove to be her last major UK chart record. By now her recording career had lost impetus and her next 45, 'Keep Away From Other Girls' (penned by the eternally-overrated Burt Bacharach) turned out to be a copper-bottomed dud, and struggled to reach No.40.
Unfortunately, it was about to get a whole lot worse. In February '63, exactly two years into her career, Helen famously set out on a one-nighters' package tour, headlining over Danny Williams, Kenny Lynch, The Kestrels, The Red Price Combo and The Honeys. But halfway through the tour, the hitherto-unknown opening act - The Beatles, of course -went to No. I with 'Please Please Me'. They were moved up the bill to close the first house, and although Helen remained the show-closer, it was readily evident that the balance of UK Pop was about to undergo a seismic shift. As is widely documented, early on in the tour messrs Lennon & McCartney offered Helen 'Misery', which at that point they hadn't recorded themselves; but Norrie Paramor, in his infinite wisdom, gave it the thumbs-down...

Meanwhile, it wasn't quite "game over", as Helen retained a massive international fanbase and continued racking up huge sellers overseas until the late 60s - for example, 'Queen For Tonight' sold very nearly a million copies in 1963, despite only reaching No.33 in the UK, whilst 'Not Responsible' went to No.1 in Australia and worldwide sales topped 500,000. Helen subsequently went on to enjoy a long, full career, later singing in cabaret, appearing in stage musicals, enjoying a couple of decades as a respected Jazz singer, and eventually turning to Gospel, after becoming a Messianic Jew.
Roger Dopson
Big Thanks to John Schroeder, whose superb autobiography, Sex And Violins (Pen Press, 2009), I have plundered, shamelessly.
Thanks also to Gary James, Betty Ford, Lucky Parker and Bernie Keith.