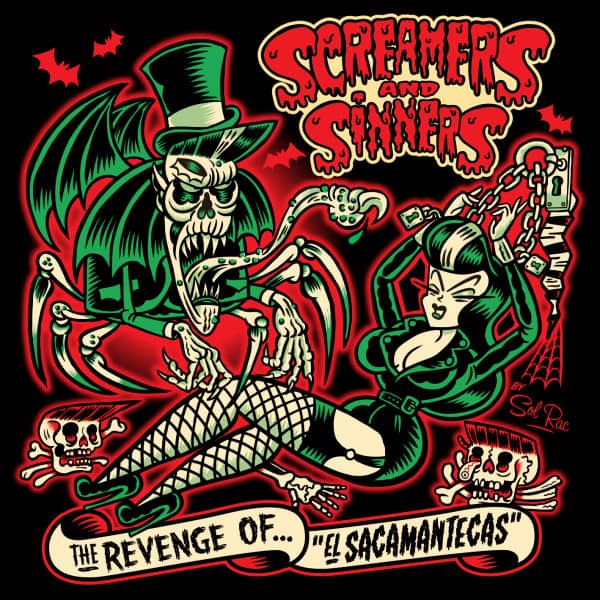 Rokanrola from Spain is often raw-edged, even more so when it comes from the north, namely Basque Country.
That’s were Screamers & Sinners were formed in 2012 and this Banda de Psychobilly revives the traditional style with some luscious local flavor.
Since the release of debut ‘Demon Tales’ they’ve been making the rounds in Europe and their second album ‘The Revenge of...El Sacamantecas’ will gain them far more recognition.
Adorned with distinct artwork by Sol Rac and produced in Nekrosounds Studios by Andy Laaf (ex-Mad Sin, now drummer for Ghostmaker),
this is already a favorite for 2017.
El Sacamantecas is an evildoer in Hispanic folklore, somewhat similar to the Bogeyman, but this creature kills for baby blood and human fat.
What kind of deal Screamers & Sinners have struck with the demon remains an enigma, but they certainly had fat by the bucketloads to grease their bloody catchy songs, along with howling sax and hillbilly harmonica, meanwhile mixing up English with their native tongue.
Next to eleven ace originals is one obscure classic: ‘Ahogate’ from the Basque punk band RIP, which is modified into a certified psycho anthem.
Oh, and somehow Guitar Slinger Doyle wound up doing vocals on the otherworldly track ‘Tutankhamun’. So come on, do the Tutankhamun!

(Promo text from The Revenge)