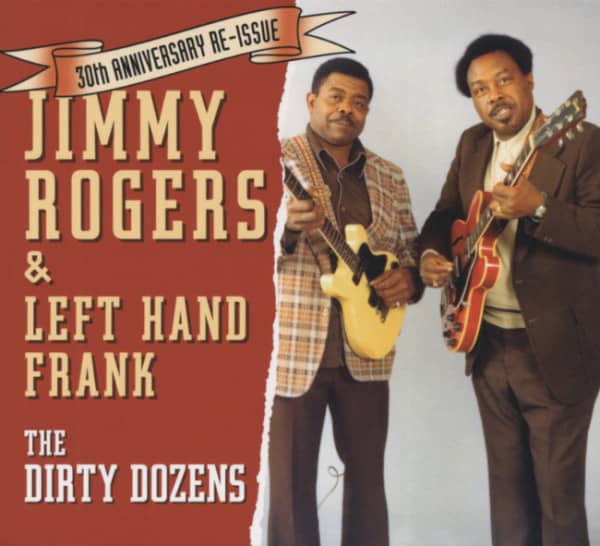 Pretty rough live and living room recordings from the early days of the JSP label. Label owner John Stedman brought these original Chicago blues men on tour through the UK, and Sweden. And he aranged for the sessions. Although rather simple recordings, the energy and expression of Jimmy and Frank is all here.- Digipak. JIMMY ROGERS - gtr/voc, LEFT HAND FRANK - gtr/voc, BOB BRUNNING - bass, RAY WESTON - drums.

Jimmy Rogers and His Trio

In addition to being the rhythmic glue that held Muddy Waters' peerless band together, guitarist Jimmy Rogers was a prolific Chess artist himself through the 1950s. That's All Right was his first Chess single as a leader (he'd backed Muddy in the studio the previous year) serving notice that Muddy's band would be an exceptionally bountiful source of talent for the label.

Rogers was born James A. Lane in Ruleville, Mississippi on June 3, 1924, growing up in Atlanta; Vance, Mississippi, West Memphis, Memphis, and St. Louis. "I started on harmonica," he said. "I was playing around with the guitar. I made me one when I was a kid growing up. I made one on the wall, down south. I started from that, listening to Robert Johnson's material, Blind Lemon Jefferson, guys like that."

Rogers also spent time in Helena, where he listened to Sonny Boy Williamson's broadcasts. He arrived in Chicago shortly before Muddy and began playing professionally around 1946. "There was another fellow called Blue Smitty," Rogers said. "We were playing some gigs here when Muddy came to Chicago. I was playing harmonica with Blue Smitty. After we got together, we had two guitars with Muddy and Smitty, and I just went back to harmonica.

"Then I just turned over after Smitty left town," he said. "We still needed the second guitar there, so Little Walter came in. Sunnyland (Slim) brought Walter to Chicago. He was a fantastic harmonica player. And I just give up the harp to him, and taken over full on guitar." They had an uncanny musical ESP. "I had my own ideas about it, about the blues, and Muddy had his. So did Little Walter," he said. "We'd catch on, comprehend real fast, between the three of us. It wasn't too hard for us, because each one of us understood the other one's reflex. So we got together, we would do quite a bit of rehearsing on the bandstand, where the public didn't know about it.

"I really didn't know what it was all about, and Muddy didn't either. We were just doing something to our satisfaction, and it was very well pleasing to the public. So then when we discovered what was going down, then I said, 'Wow, man! We got something here, we don't know how far we can go with this stuff!'" They were so good that they brashly challenged other bands. "We was the Headhunters back in those days," said Muddy. "One night we went into a club that had a contest—I think $15 and a fifth of whiskey. And we went in there and just stripped it!"

Chess wasn't the first label Rogers recorded for as a leader. He'd done a session for Ora Nelle, tried again with Regal in 1949, and first cut That's All Right for Apollo in 1950. All those sides stayed on the shelf. But when Jimmy redid That's All Right on August 15, 1950 with Little Walter on harp and bassist Big Crawford, Chess had the sense to present Jimmy to the public. The song had first been cut in 1947 by Othum Brown as Ora Nelle Blues on tiny Maxwell Street-based Ora Nelle. "I had been doing it for a long time," Rogers said. "I had been turning it around, kicking it around." In the process, he made it his own.