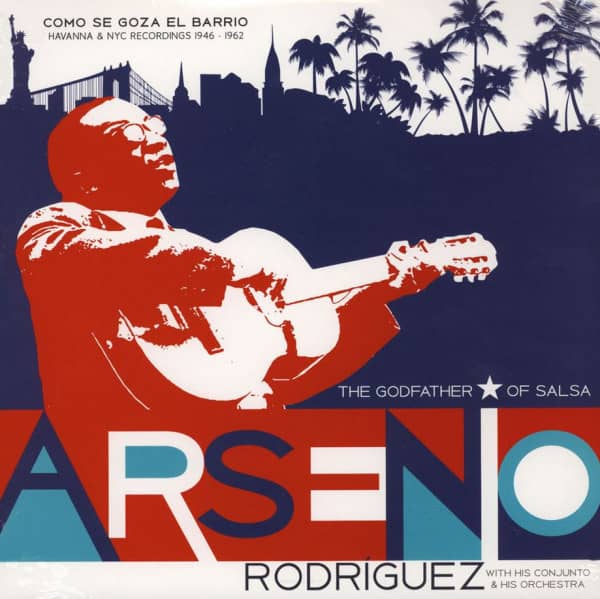 (2016/Grosso) 31 tracks 1946-1962.
A compilation from 'El Ciego Ma ravilloso', the authentic godfather of salsa. Havana & NYC early recordings.
The tracks have been remastered and restored and some are presented on vinyl after many years. Nice graphic design. 350g cardboard printed on the reverse side. Format and selection designed for DJs, collectors and general public. Ignacio de Loyola Rodríguez Scull aka Arsenio Rodríguez (30 August, 1911, Güira de Macurijes, Matanzas, Cuba - 30 December, 1970, Los Angeles, CA, USA) was a Cuban musician, bandleader and prolific composer who developed the son montuno and other Afro-Cuban-based rhythms.
-
Some of his best-known, and most-often covered recordings from the 1950s and early 1960s are included here, among them 'Dame un cachito pa' huele', 'Dundunbanza', 'El reloj de pastora', 'Cambia El Paso', and 'Hay Fuego En El 23'. Never one to stand still creatively, by the early 1960s Arsenio began introducing other experimental modes of expression taken from his new adopted home (jazz, r&b, rock) into his conjunto, incorporating saxophones and alking' bass, as well as amplifying his guitar and even singing a few tunes himself (in a jocular, gruff tone). True to his racial pride, he often utilized African religious terms, melodies, rhythms and sonorities.
-
Leaving the barrios of New York behind and moving to Los Angeles in 1969 - 1970 to try his luck on the West Coast amongst the Chicanos (he had lived there briefly with his brothers Kiki and Raúl from 1964-1966), Rodríguez unfortunately remained relatively unknown in California, and by most accounts audiences were indifferent to his by now old-style Cuban music, especially with the rise of Latin rock, which was ironic since he had often played his tres with distorted, sustained amplification not unlike that in use by guitarists like Carlos Santana and others. In the late 60s and early 70s, Johnny Pacheco, the Dominican bandleader and musical director of Fania Records, had been recording versions of the conjunto and son montuno sound that Rodríguez and others like La Sonora Matancera had pioneered decades before, complete with trumpets and tres, and similar arrangements.