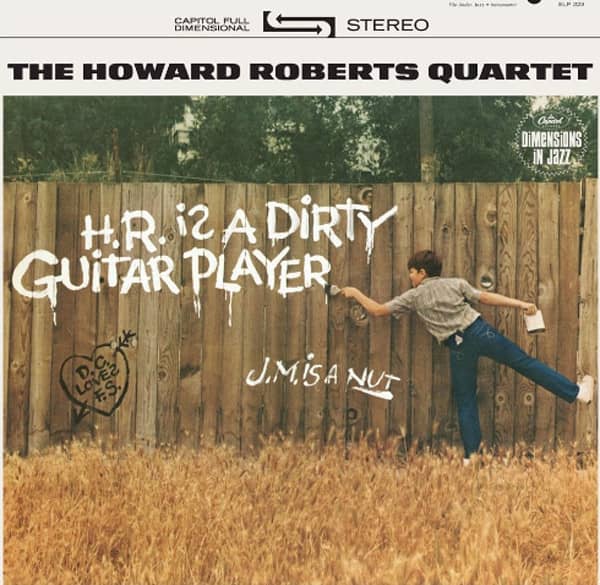 Howard Roberts' swinging jazz guitar masterpiece from '63!
In the pantheon of under-the-radar American guitar heroes, Howard Roberts looms large. A remarkably versatile musician who was one of Los Angeles' most in-demand session players from the early 1950s through the 1970s, Roberts' career encompassed an incredible array of studio assignments. He recorded with a dizzying assortment of acts, including Elvis Presley, Frank Sinatra, the Beach Boys, the Monkees, Dean Martin, Sonny and Cher, the Jackson 5, Peggy Lee, Eddie Cochran, Chet Atkins and the Electric Prunes. He also played on countless film and television soundtracks; his guitar work is featured prominently in the iconic theme music of The Twilight Zone, The Munsters and I Dream of Jeannie.
Roberts was also an accomplished musical educator, co-founding Hollywood's Guitar Institute of Technology, writing a regular instructional column on jazz improvisation for Guitar Player magazine, and penning several highly-regarded guitar instruction books. As a guitar teacher, one of his students was a teenaged Phil Spector , for whom Roberts would later work as a session man.
Impressive as his session resume is, for many guitar aficionados, the real highlights of Howard Roberts' body of work are the instrumental albums he released under his own name throughout his career. One of his best-loved solo releases is the memorably titled H.R. Is A Dirty Guitar Player, originally released by Capitol Records in 1963. Recorded at the legendary Studio A in the Capitol Tower, with a band that includes fellow studio legends Chuck Berghofer and Earl Palmer on bass and drums, H.R. Is A Dirty Guitar Player is a potent showcase for Roberts' fluid, swinging guitar work. The material offers ample opportunity for the artist to demonstrate his versatility, encompassing pop standards (Lerner, Loewe'If Ever I Would Leave You'), bossa nova (Antonio Carlos Jobim's 'One Note Samba') and jazz (tunes by Herbie Hancock, Count Basie and Duke Ellington), along with such Roberts originals as 'Smolderin',' 'Turista,' 'Deep Fry' and 'Dirty Old Bossa Nova.'
Long unavailable in its original form, this vintage instrumental gem has been restored to its original vinyl glory by Sundazed Music. The album has been sourced from the original stereo masters and pressed on vinyl, with complete original cover art.