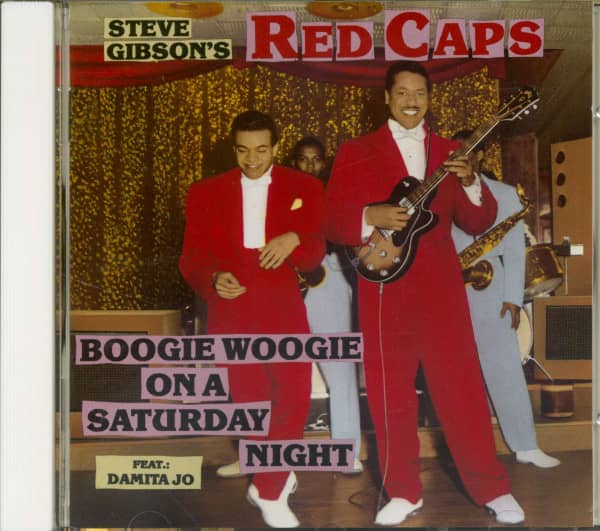 This article is deleted and can no longer be ordered!
Please inform me as soon as the product is available again.
P Secure bonuspoints now
Description Review 0
Description
The Red Caps, one of the early black vocal groups to succeed in the pre and post-war eras, were... more
Close menu

The Red Caps, one of the early black vocal groups to succeed in the pre and post-war eras, were unusual in a most functional respect: not only were they a fine vocal group in and of themselves, but they were a self-contained unit as well. They could play their own instruments, and not too shabbily at that. Beginning in 1938, the group always specialized in their live act, and as such their recordings often tell only part of the story. After a successful run of recordings for Joe Davis' assorted labels, the group made some changes, signing with RCA in 1950 and adding thrush Damita Jo in '51.

This collection corrals all of their Victor recordings from 1950 to 1955 - 28 in all (3 previously unreleased), including Sidewalk Shuffle, D'Ya Eat Yet Joe, Nuff Of That Stuff, A Fussin' And A Fightin', and the original version of the big pop hit I Went To Your Wedding.
No street-corner harmonizers, no Ink Spots hummers, the Red Caps were a self-contained entertainment unit like Louis Jordan's Tympany Five or the Spirits Of Rhythm. Formed in 1942 from the remnants of several vocal groups who had worked in motion pictures in Hollywood, the Red Caps were ac-complished musicians as well as singers, geared to play the night clubs in those fun-hungry war years. Steve Gibson, the founder of the group, put it this way in 1953, "I noticed that a lot of middle-class clubs were going out of busi-ness because they could not meet all the expenses of a band and entertainers too. So I formed a group which could play, sing and wash the dishes, if neces-sary. As a result I signed up jobs for five years in the future.

Today I could play for50 weeks a year, if we could stand the grind." Originally known as the Four Toppers, the group worked the West Coast club and TV circuit and then moved into tours of the rest of the country. While ap-pearing at the Enduro Club in Brooklyn, they were spotted by Joe Davis, who was scouting talent for his new Beacon label. Davis was reacting to another war-inspired need in the music business - records for juke boxes. The ration-ing of shellac had severely restricted record production at the same time a musicians ban on recording had curtailed most sessions at the major labels.

As the Five Red Caps, Gibson's group recorded prolifically for Davis and his labels. Despite the array of instrumental talent available in the Five Red Caps, their records from this period featured only piano, bass, guitar and vibes. In the manner of the day, a ballad was usually paired with a jump tune, and the presence of high tenor Jimmy Springs on the love songs, sometimes with "talking bass" choruses by Gibson, caused the inevitable comparison to the then-reigning Ink Spots. Regardless of knee-jerk reviews that emphasized the similarities in styles be-tween the two groups, the Red Caps scored a major R&B hit with I Learned A Lesson (I'll Never Forget), their sixth release for Davis, in January, 1944.

Later that year, the group did a session for Herman Lubinsky's Savoy label, released as by The Toppers. On stage, the Red Caps continued to develop as a complete musical revue with singing, dancing, comedy and playing.