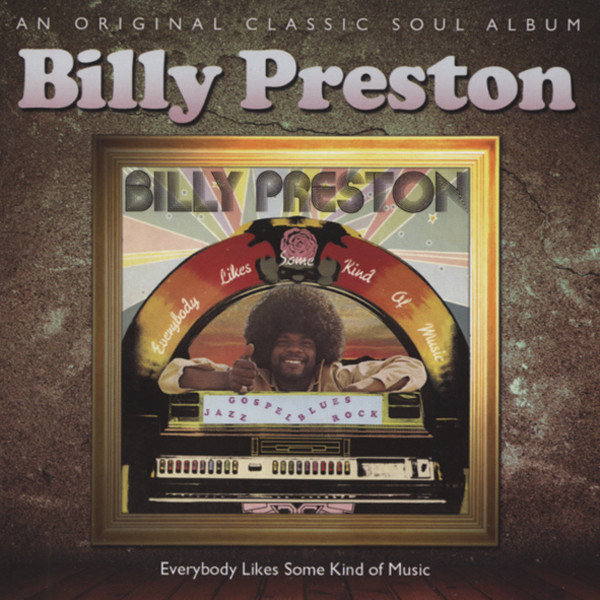 Billy Preston: Everybody Likes Some Kind Of Music (1973)

Article properties: Billy Preston: Everybody Likes Some Kind Of Music (1973)

A double threat as an ebullient vocalist and a rollicking organist, Billy Preston proudly wore his sanctified roots on his sleeve. Sporting a humongous Afro and a mile-wide grin, Preston radiated happiness whenever he hit the stage.

Born September 2, 1946 in Houston, Preston arrived in Los Angeles with his family at age three. He was a child prodigy on organ and budding actor to boot, portraying the young W.C. Handy in the 1958 biopic ‘St. Louis Blues.’ His organ chops were advanced enough to cut a ‘63 instrumental album for Sam Cooke’s Derby label, and he was part of The Cogics, a promising young spiritual aggregation. “We were called the teenage gospel wonders of the world,” saidSondra ‘Blinky’ Williams, who was joined by Edna Wright, Gloria Jones, and Andrae and Sandra Crouch along with Preston. “One by one, record companies sought us out. That’s how we broke up. Everybody ended up recording a single.”

Being based in L.A. was a huge plus for Billy. He was a regular on ABC-TV’s mid-‘60s rock program ‘Shindig!’ and recorded for Capitol. But his big break came across the pond. The Beatles invited him to play keyboards on their ‘Get Back’ album (they grew so close that he was referred to as ‘the fifth Beatle’), which led to Preston making his own single for their Apple label. That’s The Way God Planned It gave him his first pop chart entry in 1969.But Billy had to switch over to the A&M logo and sit back down at the keys to wax his first real smash.

Preston produced and co-wrote the funkified Outa-Space, pounding a clavinet through a wah-wah pedal to create a futuristic sound that blasted up to #1 R&B and #2 pop during the summer of ’72 despite being originally designated as the B-side of I Wrote A Simple Song. Preston could do no wrong after that at A&M; his two pop chart-toppers Will It Go Round In Circles (1973) and Nothing From Nothing (1974) were joyous vocals, while his #1 R&B smash Space Race was an infectious instrumental workout.

A move to Motown near decade’s end brought him another pop vocal smash, With You I’m Born Again, a duet with Stevie Wonder’s ex-wife Syreeta. With The Beach Boys’ Dennis Wilson, Billy wrote Joe Cocker’s syrupy ’75 hit You Are So Beautiful. Personal problems later bogged down Preston’s career. He died in an L.A. hospital on June 6, 2006.