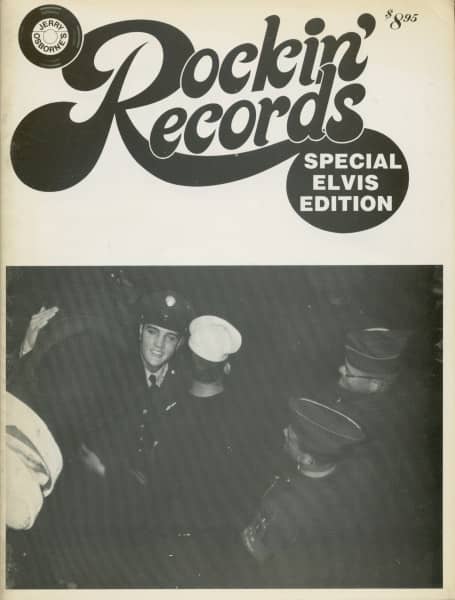 INTRODUCTORY NOTES
This Rockin' Records Special Elvis Edition fulfills two needs that a flood of Elvis record collectors have been writing and calling us about.

FIRST: Record collectors and dealers who don't get involved in anything other than Elvis collectibles asked about the possibility of a separate guide, one that would contain all of the Elvis infor-mation that appears in Rockin' Records Reference Book & Price Guide, but without the information on other artists. Not only does this special edition contain all of the important Elvis data, exactly as prepared and printed in Rockin' Records, but the increased amount of space allows for larger type to be used, making this guide even easier to use. Naturally, it is also more convenient to carry with you when you go 'record hunting.' Noteworthy also is the savings to the Elvis collector, with this edi-tion priced considerably lower than the huge Rockin' Records.

SECOND: In the three years since the last Osborne Elvis guide, Presleyana Second Edition, a tremendous amount of new Elvis material has appeared. Surprisingly, a great deal of the newly discovered Elvis record collectibles are older releases. Some are even from the fifties! There has also been a great deal of recently issued product, most in conjunction with the Elvis 50th Anniver-sary Celebration. Everyone has been wanting all of this new information and no one wanted to wait until 1987, when our giant Elvis Collectors Guidebook is due, marking the 10th Anni-versary of the King's passing. This Special Collectors' Edition will surely satisfy both of these needs.

The Rockin' Records price guide format is one that was carefully devised to provide for the inclusion of over 100,000 records by thousands of pop and rock artists. It also enables us to include every type of recording in one multi- purpose guidebook: 7-Inch 45rpm singles, both 33rpm and 45rpm; 78rpm singles; 12-Inch singles, both 33rpm and 45rpm; Extended Play EPs; Long Play LPs, 10- Inch and 12-Inch; Compact Discs and more. The format is structured, under the artist heading, alphabetically by LABEL rather than by title. Listings for each label (which are
• •
mostly RCA Victor in the Elvis section) appear in numerical order! In many instances, listings that are numerical by catalog number are also chronological in sequence of release, but there are also many times where this isn't true. Since the year of release is also provided for each listing, the reader knows imme-diately the pattern being followed by the label at the time. The numerical listings generally utilize only that portion of the catalog number that designates that particular issue. Therefore, letter and number prefixes are not used UNLESS it is absolutely necessary to distinguish one release from another (such as an LSP album being reissued with an AFL1 prefix but with the same catalog number). This means that to locate RCA Victor 47-6357, look up only 6357. Finding EPA-994 requires looking for 994. SPS 33-347 will be found as 347. When you can only think of the title of the Elvis record you wish to locate in the guide, and the disc is not available to pick up a number from, refer to the handy TITLES/CATALOG NUM-BERS INDEX. This chapter preceeds the actual record listings section.

Look for the title in either of the three catagories, Sin-gles, EPs or LPs, and you'll instantly know the original catalog number followed by any and all reissues. You then know exactly where to find the information you seek. The TITLES/CATALOG NUMBERS INDEX also represents the first time in print for this very useful compilation of recording information. Without a doubt, this chapter will provide an excel-lent addition to your Elvis library, apart from its usefulness within the confines of this edition.

Listing and pricing so many releases in Rockin' Records has forced us to economize on space, resulting in the listing of individual titles WHENEVER NECESSARY but not in those instances where it's possible to group a number of equally valuable releases together on one line. Again, ANYTIME we find it necessary to give a separate listing to a record in order to clearly and accurately present the information, we will do it. Because of its many complexities, the Elvis section does, in fact, require a tremendous amount of individual title separation.

(January 8, 1935, Tupelo, MS – August 16, 1977, Memphis, TN)
Elvis Presley (full name Elvis Aaron Presley) is the most outstanding personality in showbiz ever since, and the most popular entertainer the world has ever seen! His musical influence within music history and its following generations of musicians is still unbroken. His huge 'Blast-Off' in the mid-1950s, the rising star from a simply called 'Hillbilly Cat' (at Sun Records) to a lascivious Rock'n'Roll singer with charisma, a male sex symbol (then at RCA Victor) soon popularized him as "The King of Rock'n'Roll" or simply "The King".
His first cut within his tremendous career happened between October 1958 and March 1960 while Elvis was on duty with the U.S. Army and stationed in Germany. It was there in 1959 when he met his later wife Priscilla Beaulieu at age 14. Elvis and Priscilla married on May 1, 1967 in Las Vegas (divorce in 1973). Elvis evolved into an all-around entertainer after his Army service and started starring in Hollywood films. 33 movies in total, including the two concert documentaries 'That's The Way It Is' and 'On Tour'. He again shook the world with his 1968 NBC Comeback TV Special after his movie period without any stage appearances.
This TV special included the first ever unplugged session presented together with musicians from the early days such as Scotty Moore and D.J. Fontana. 1973 saw THE TV mega event at all: Elvis Presley, 'Aloha From Hawaii via Satellite'! Elvis' Honolulu appearance, the first time that a show was broadcasted worldwide via satellite! He was ahead of his time! Elvis Presley had 148 US single chart hits, including some so-called double-sider when A- and B-side both hit the charts like his 1956 smash 'Don't Be Cruel b/w Hound Dog', plus 15 EP hits between 1956 and 1977. Two billion of sold media and sound carriers by Elvis Presley is the estimated number! He received 14 Grammy nominations until 1978 and three Grammy for his Gospel interpretations. Elvis was the youngest artist when honored with the Bing Crosby Award (Lifetime Achivement Award) in 1971.
He is presented in 5 Halls of Fame (Rock'n'Roll, Rockabilly, Country, Blues and Gospel). Six of his song interpretations are collected in the Grammy Hall of Fame. On top of it all Elvis Presley got the most gold and platinum records and a Diamond-Award. He definetly is the 'Best selling solo artist in U.S. History' (RIAA – Record Industry Association of America)! Elvis Presley CD albums, vinyl records as LPs or singles at 45rpm - Bear Family offers a huge number of various Elvis Presley CDs, vinyl-LPs and 45rpm singles, vinyl- and CD box sets, books and mags, DVDs, unique and extraordinairy memorabilia! Let's say it in the words of one of Elvis sixties album title: There is "Something For Everybody"! And hey, you name it! Elvis Presley is the King of Rock'n'Roll, the biggest icon in showbusiness, and a great person who lives on forever!
Bear Family Records treats his legacy with the most respect and an optimum capacity of expert knowledge.
Review 0
Read, write and discuss reviews... more
Close menu
Customer evaluation for "Jerry Osborne's Rockin' Records Special Elvis Edition"
Write an evaluation
Evaluations will be activated after verification.
Weitere Artikel von Elvis Presley
Elvis Presley: Elvis Ten Years After by Anne E Nixon (Hardback) Art-Nr.: 0016051