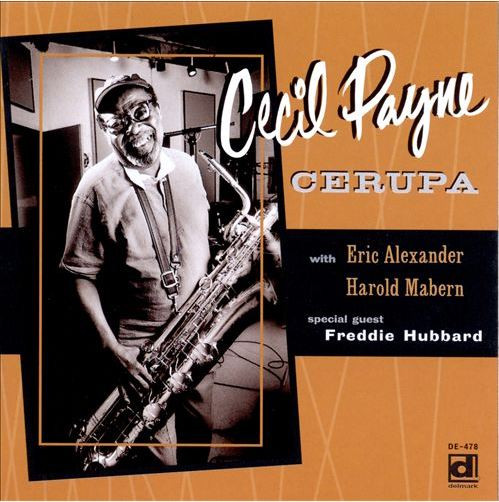 This article is deleted and can no longer be ordered!
Please inform me as soon as the product is available again.
P Secure bonuspoints now
Description Review 0
Description
(1993/Delmark) At age 72, Cecil Payne makes a recorded comeback with this release. He sounds in... more
Close menu

(1993/Delmark)
At age 72, Cecil Payne makes a recorded comeback with this release. He sounds in fine form, playing with dexterity, clarity, and depth on baritone sax, and brings out his flute for two of the eight cuts. Six of the eight selections are his compositions. A mixed-generation band has old hands John Ore (bass) and the great Harold Mabern (piano) teamed with younger men Eric Alexander (tenor sax) and Joe Farnsworth (drums). Guest trumpeters Freddie Hubbard or Dr. Odies Williams III get cameos. As expected, this is a hard bop date, reflective of Payne's history with Dizzy Gillespie, J.J. Johnson, Tadd Dameron, and James Moody. The hard swingers are the best and show Payne's up to the task. "The Opening" is a jumping, inspired, memorable melody that's quite hummable. Alexander's double plus tenor and Payne's bari mesh very well. The closer, "Brookfield Andante," is a muscular, 13-minute waltz that swings very hard, showing the rhythm section to be quite capable as well. Mabern is amazing in so many ways in terms of energy patterns, unique phrasings, and diversity. He can play in an etude fashion as on the intro of "Be Wee" and deal with Latin inflections during "Bosco" and "Andante," while his solos are riveting, fleet, and just plain astounding. They begin with Mabern's classical set-up and hit hard with power-packed solo after solo from everyone in the band. Gil Fuller's hard bopper "Cuba" is also hefty, and though just under five minutes, proves the two saxophonists can sustain each other's interest as well as a jazz-trained ear. Payne's excellent flute, popping with quick boppish charm, is heard on the midtempo swing of the title track, dedicated to wife C. Ruth Payne, with Mabern quoting Charlie Parker-isms. The most developmental piece, "Bolambo," has bolero shadings, but starts free, goes to a 4/4 bari and jungle tom-tom section, another floating segment, and then to a definite uptempo swing groove. The left-right turns of this piece are quite impressive. "I Should Care" is the lone standard and an easy stroller with bari leading and tenor following. As great a baritone saxophonist as Payne has always been, his recording career is checkered. On the big horn, and especially flute where he is an unsung hero, this CD proves a great statement for an enduring jazzman who was never far from the truth, and still digs what he's doing. Recommended as perhaps his best documented work.