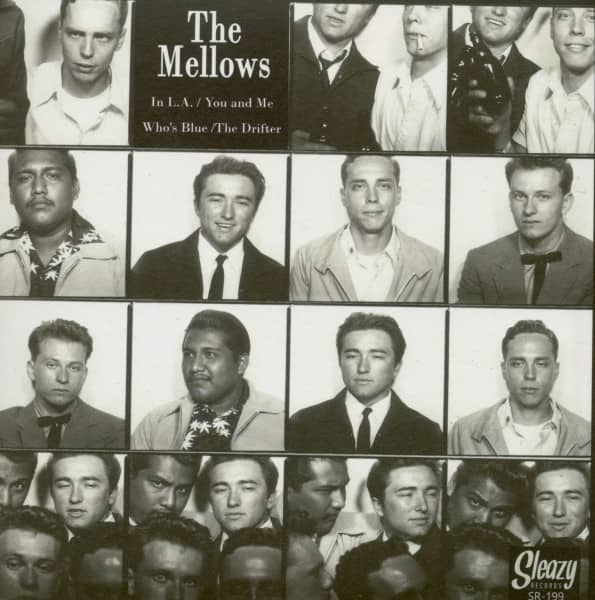 Learn more about The Mellows
The Mellows Smoke From Your Cigarette The Mellows featuring Lillian Leach Back we go... more
Close menu
"The Mellows"

Smoke From Your Cigarette

Back we go to the Morrisiana section of New York City's Bronx to luxuriate in the smooth Mellows, one of the few '50s male groups with a female lead. Lillian Leach, only 17 when she cut Smoke From Your Cigarette on July 14, 1954 for Joe Davis' Jay-Dee label, met tenors John 'Tiny' Wilson and Harold Johnson and bass Norman Brown at a party, where the trio was harmonizing in the hallway. Lillian had learned how to sing at her mother's church; Johnson had been a member of Dean Barlow's Crickets (he penned Smoke From Your Cigarette).

Davis had been around forever as a producer, composer, and record label owner. He issued The Mellows' How Sentimental Can I Be as The Mellows' August '54 debut with the surging Nothin' To Do on the flip, Lillian's young pipes clear and confident. Sam 'The Man' Taylor's pretty sax winds around her heartfelt lead on Smoke From Your Cigarette, the quartet's Jay-Dee encore at the beginning of '55 (ex-Ravens accompanist Howard Biggs provided the piano). 'Polecat' Brown stepped up for the flip Pretty Baby, What's Your Name, though Leach had a piece of the lead action.

Local sales on Smoke were hearty enough to convince Davis to bankroll another session in January of '55. Leach wrote the lovely I Still Care, half of The Mellows' third outing when it came out in March tied to the easy-going I Was A Fool To Let You Go. That September, Jay-Dee issued a last Mellows single pairing a sentimental Yesterday's Memories and the introductory jump Lovable Lilly. Brown left, but The Mellows reconfigured with bass Arthur Crier (born in Manhattan on April 1, 1935) and Gary Morrison, both formerly of The Five Chimes. They signed with manager David Levitt's Celeste label for the Johnson-led Lucky Guy b/w a Leach-fronted My Darling and then I'm Yours paired with an almost unrecognizable Sweet Lorraine .

Before 1956 was over, The Mellows moved to the similarly tiny Candlelight logo, where they did Moon Of Silver b/w You've Gone (its label misspelled Lillian's surname as Lee). They gave it a last shot in 1958 at Apollo, but that imprint was on its last legs and never issued The Mellows' Be Mine and So Strange. Lillian retired to concentrate on her family; Crier and Johnson turned up in The Halos, whose Nag was a 1961 hit. After a long hiatus, Lillian, Arthur, and Gary revived The Mellows in 1983. Morrison died in July of 1987, while Crier passed away on July 22, 2004.

Review 0
Read, write and discuss reviews... more
Close menu
Customer evaluation for "In L.A. - You And Me - Who's Blue - The Drifter (7inch, EP, 45rpm, PS)"
Write an evaluation
Evaluations will be activated after verification.
Weitere Artikel von The Mellows
The Mellows: The Mellows (CD) Art-Nr.: CDMELL12