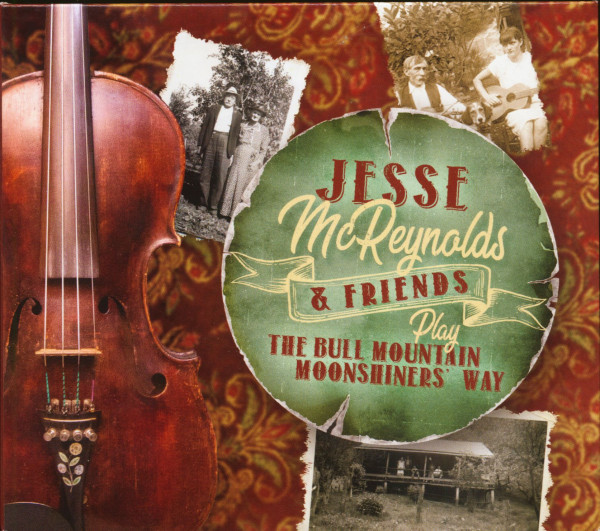 (Pinecastle Records) 16 Tracks - Deluxe Digisleeve
As one part of the legendary bluegrass duo Jim & Jesse, Jesse McReynolds has been a solo artist since the death of his brother Jim in 2002. Now he comes with this new album for 2019 on which he presents, with the help of musical friends such as Buddy Griffin, Mike Snider, Jim Brock, Steve Thomas and others, an extremely authentic traditional mix of hillbilly, square dance music, cowboy songs and bluegrass! Be sure to listen, because the elderly man can still do it, he even shines! Fantastic album! MM/Bear Family Records
Working alongside his brother as Jim and Jesse, the duo blazed a trail in the music industry as influencers whose impact can be felt to this day. 'My grandfather, Charles McReynolds, answered a newspaper advertisement in the Bristol newspaper inviting musicians in the southwest Virginia area to come to Bristol and be part of what later became known as 'The Boom of Country Music, ' says Jesse.

The historic multi-day field recording sessions, running from July 25 through August 5, are today collectively known as 'The Bristol Sessions.' These recordings have shaped the history of country music as we know it, producing ground breaking records of Jimmie Rodgers, the Carter Family, the Stoneman Family, and many others, such as Charles McReynolds. On August 1, 1927, Charles, along with his son William McReynolds recorded two sides, 'Johnny Goodwin' and 'Sweet Marie, ' as the Bull Mountain Moonshiners. The fiddle that Charles McReynolds played on these recordings was later acquired by Jesse. Inspired by the instrument itself, Jesse has crafted an entire record around this historic fiddle. If that wasn't good enough, Jesse also obtained the banjo used by his Uncle Will at The Bristol Sessions to use on this album.

These two historic instruments, featured in the same format that they first appeared in recorded music history, are prominently showcased here as a tribute to Jesse McReynolds' musical heritage. Jesse has assembled a formidable cast of fiddlers to show off his grandfather's fiddle, many who worked with Jim and Jesse, as well as some notable clawhammer banjo players to perform on his Uncle Will's banjo. Even so, it is Jesse's own fiddling that takes center stage on this record. This recording will surely cement Jesse's legacy as not only one of the premiere mandolin players of his generation, but also as one of the last great old-time fiddlers still living today