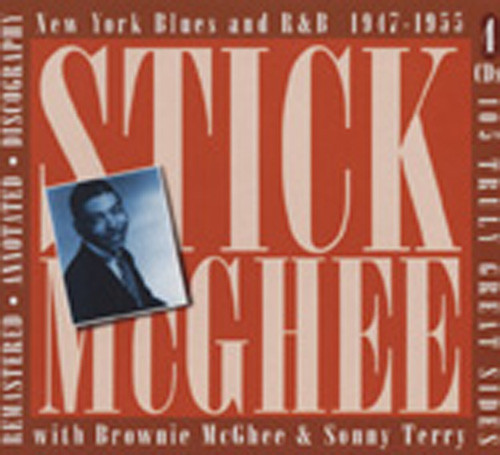 Stick McGhee and His Buddies

As the younger brother of a future blues legend, 'Stick' McGhee gets the short end of the you-know-what in the history books despite originating a genuine classic. Born Granville Henely McGhee on March 23, 1917 in Kingsport, Tennessee, he got his nickname from using a stick to push the four-wheeled cart that his polio-stricken brother Walter rode around in (maybe you know him better as Brownie).

While Brownie got started on building his legend as a bluesman during the early '40s, Stick served in the Army during World War II. That's where the inspiration for Drinkin' Wine Spo-Dee-O-Dee arose, as an obscene barracks chant. He joined Brownie in New York after the war and in 1947 waxed a cruder rendition of Drinkin' Wine without his sibling for J. Mayo Williams' little Harlem logo. It went nowhere fast. Williams dumped his 78 pressings on a New Orleans distributor who got it some unexpected airplay. Atlantic Records heard about it and jumped into the fray, recutting the rollicking ditty on February 14, 1949 in New York with Brownie on lead guitar and second vocal, Wilbert 'Big Chief' Ellis on piano, and bassist Gene Ramey. Their hustle was rewarded with a #2 R&B smash that spring.

Stick found following it up successfully a tough proposition. Despite some fine encores for Atlantic (Tennessee Waltz Blues was his only other chart entry in '51), London, Essex, King, Savoy, and Herald, Stick's fortunes went the wrong way while Brownie and his harp-blowing partner Sonny Terry achieved enduring stardom. Lung cancer claimed Stick on August 15, 1961 in the Bronx, aged only 44.

If Stick has been all but forgotten, his signature song hasn't. It was the first thing Jerry Lee Lewis ever performed in public, and he's cut several versions over the decades (his '57 Sun rendition is impossible to beat). Rockabilly wildmen Johnny Burnette, Malcolm Yelvington, and Whitey Pullen had their way with the tune, as did R&B shouters Wynonie Harris, Sonny Parker (with Lionel Hampton's orchestra), Big John Greer, Larry Dale, and the Treniers. Hoy hoy hoy!