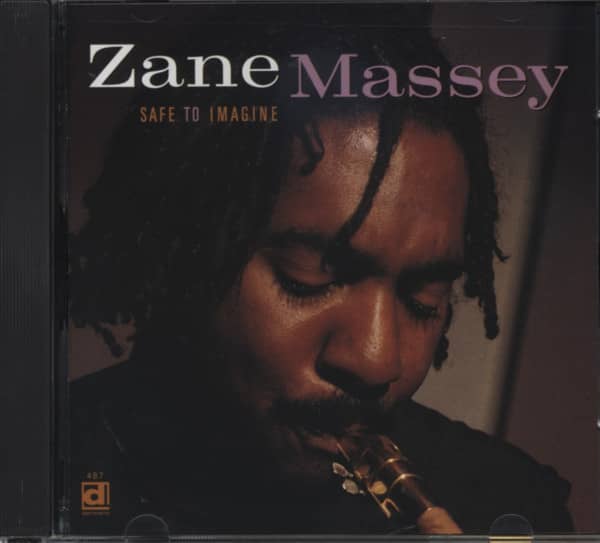 (1996/Delmark) 8 tracks,
Zane Massey's Safe to Imagine is a reassuring sign that the jazz pantheon of tenor saxophonists continues to be renewed and reinvigorated. Adept in settings from bop to post-bop, from free to funk, Massey evokes Rollins, Ornette, Coltrane, Mobley, Shorter, Henderson, Sanders, et. al in a conception that is neither iconoclastic nor curatorial. He plays with vitality and imagination and has a maturity in his approach that resists the temptation to fill the canvas with notes. Made up of three trio and five quartet performances, this 1994 session covers a fair bit of ground with cohesion and logic. Playing with just bassist Hideiji Taninaka and drummer Sadiq M. Abdu Shahid, Massey works in an Ornette-ish vein on his own "Telekinetics" and then as a Rollins-esque sound sculptor on Shahid's "Myras' Maya." The quartet numbers, with pianist Denton Darien, are in a more hard bop style. The only clunker is Taninaka's corny gospel number, "The Sun of Son." In addition to writing from all members of the group, there are three pieces from Massey's father, the late composer and trumpeter Cal Massey, including two associated with Archie Shepp: "Things Have Got to Change" heard on Shepp's 1971 album of the same name, and "Quiet Dawn" from Shepp's 1972 release Attica Blues. The former is a high-energy modal vamp that features Massey's soprano sax; the latter is a Latin-ish instrumental on which Cal Massey's seven-year-old daughter Waheeda sang the lyrics (also penned by Cal) for Shepp's version.