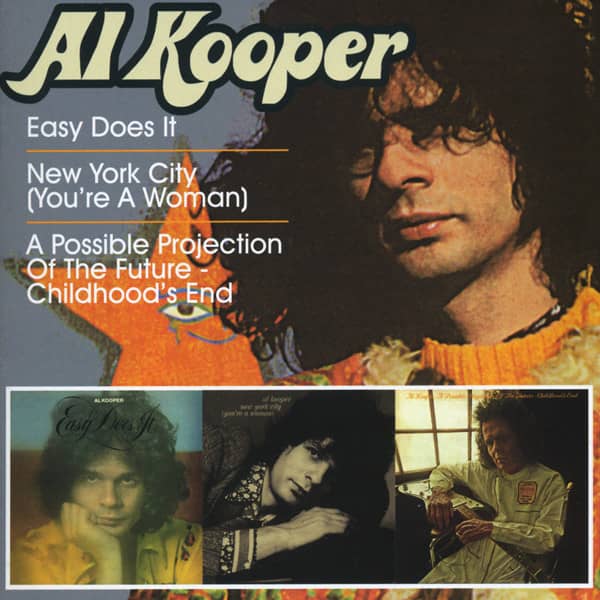 Al Kooper. Few musicians have had a more chequered or more fascinating career than Al Kooper born in New York in 1943. At 13 he was a member of the Royal Teens who had a Top Ten hit with the novelty 'Short Shorts' on ABC in 1958. At 19, with a reputation as a session guitarist, he quit college to work as an apprentice engineer in a recording studio before teaming up with songwriters Bob Brass and Irvine Levine. Despite a No. 1 with `This Diamond Ring' for Gary Lewis and the Playboys in 1965, Kooper didn't enjoy Tin Pan Alley life and spent his time between session work gigging round the folk clubs.

Then Tom Wilson invited Kooper to a session by Bob Dylan. Kooper was determined to play on the session, but Mike Bloomfield was there to play guitar so Kooper muscled in to play organ. He didn't know the first thing about the instrument but felt his way through the take. Dylan was impressed by the amateurish squeezed organ sound and the take was used on the record, 'Like A Rolling Stone'. Kooper later joined Dylan at the famous 1965 Newport Folk Festival electric set before completing the Highway 61 album. His association with both Dylan and Mike Bloomfield stood Kooper in good stead in the future.

In 1966, through Wilson, Kooper came to join the Blues Project. He played on three albums by the group, the two live ones and the studio Projections, until friction with gui-tarist Danny Kalb caused him to leave both the group and New York. In L.A., he gigged around, and unveiled future Blood, Sweat and Tears songs at the Big Sur Folk Festival in 1967. Back in New York Kooper put together a temporary band to play a week at the Café A Go Go in order to fund a trip to England. It was these musicians who became the nucleus for BS and T. However, after the remarkable Child Is Father To The Man album he found the band slipping away into an alien direction and left them to start work with Columbia as a producer. Filling in studio time, he started another trend (which, like jazz rock, was later to get out of hand) by recording an album with Mike Bloomfield and Steve Stills (fresh from Buffalo Springfield) which became Supersession (1968).

Its spectacular success led to a series of live concerts with Mike Bloomfield again captured on the, for the most part excessive album, The Live Adventures Of Al Kooper And Mike Bloomfield (1969). In the Seventies, Kooper released a series of usually weak solo albums of which only Easy Does It and New York City Y ou're A Woman do him any real credit. The latter was mostly recorded in England with members of Elton John's Band. A man never afraid to speak his mind and never the darling of the critics, Kooper's involvement with great pro-jects and seminal schemes singles him out as someone special. Currently he is living in Atlanta, having set up the Sounds Of The South label.