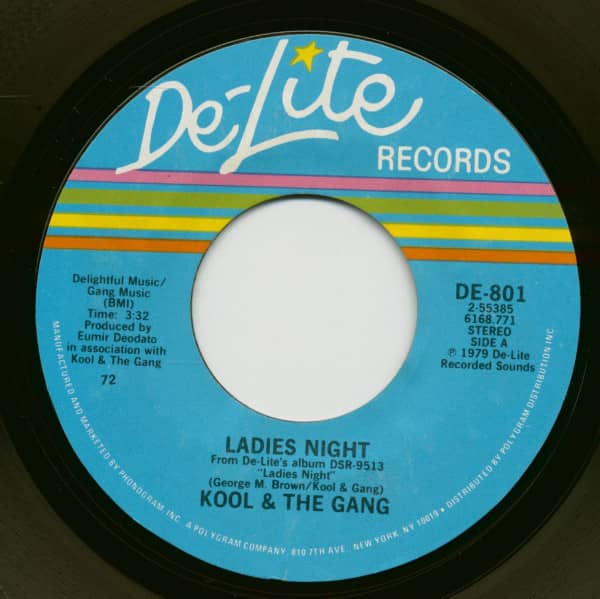 Jersey City, New Jersey was home to Kool & The Gang, a self-contained unit that split the gap between jazz and funk. Built around the Bell brothers (Robert, aka Kool, on bass and Ronald on tenor sax) with trumpeter Robert ‘Spike’ Mickens, alto saxist Dennis Thomas, guitarist Charles Smith, keyboardist Ricky Westfield, and drummer George Brown, they started out as The Jazziacs in 1964. Their name changed from The Soul Town Band to The New Dimensions to Kool & The Flames and finally Kool & The Gang, the handle they proudly wore when Gene Redd signed them to his New York-based De-Lite Records.

Kool and his crew boasted a raging horn section that could navigate jazz-based passages as well as sweaty funk. Their first hit instrumental, not so imaginatively titled Kool And The Gang, cracked the R&B Top 20 during the fall of 1969. Let The Music Take Your Mind and Funky Man did the same the next year, and the band registered decent-sized hits for De-Lite until the #5 R&B seller Funky Stuff elevated the band in 1973. Out late that year, the roiling Jungle Boogie went gold as it blasted up to #2 R&B and #4 pop, paving the way for their first R&B chart-topper, Hollywood Swinging, during the summer of ’74. It soared to #6 pop and became the group’s second million-seller.

Written as usual by the entire band, the funk-dripping Hollywood Swinging was influenced by Manu Dibango and Mandrill but instantly identifiable as Kool & The Gang. Funky Stuff, Jungle Boogie, and Hollywood Swinging were all put together during a single rehearsal at Mediasound Studios on 57th Street in Manhattan and laid on tape that same evening—not a bad day’s work! All three smashes were aboard their ‘Wild And Peaceful’ album.

Kool & The Gang could do no wrong. 1974’s Higher Plane and the next year’s Spirit Of The Boogie paced the R&B charts, and they nailed four more Top Ten R&B entries with their funky stew. Then the band hired lead singer James ‘J.T.’ Taylor and got smoother and more seductive on their 1979 #1 R&B entry Ladies Night, followed by Too Hot and then their ’80 platinum monster Celebration, a staple of wedding playlists ever since, which sat atop both the pop and R&B lists.

All the way through the ‘80s, Kool & The Gang reigned as hitmakers, their supple grooves later proving invaluable to contemporary hip-hoppers and rappers. Kool and his younger brother, as well as Thomas and Brown, anchor the group to this day.