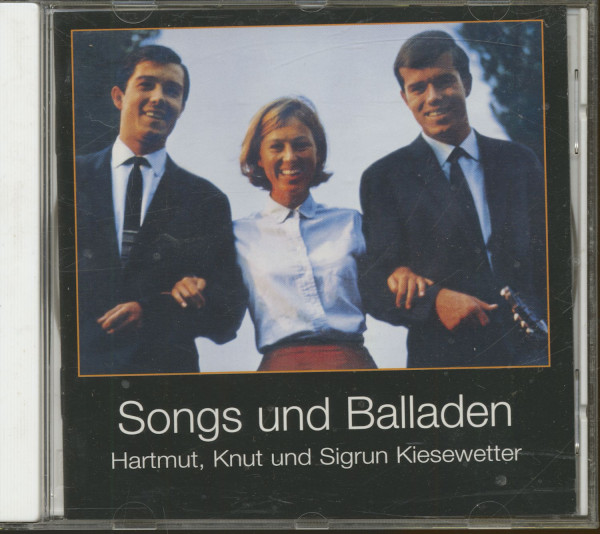 This article is deleted and can no longer be ordered!
Please inform me as soon as the product is available again.
P Secure bonuspoints now
Description
Learn more about Hartmut,Knut & S. Kiesewetter
Review 0
Description
more
Close menu

"I'm doing everything I think I can." (Knut Kiesewetter)

Knut Kiesewetter cannot be put into a drawer. Born in Stettin in 1941, the artist did practically everything in the 60s: blues, rock, soul, gospel, chanson, folk and above all jazz - in 1961 he was elected 'Germany's number one jazz singer'. Even Johann Sebastian Bach's Will You Give Me Your Heart recorded gravel weather. He earned his living with East Frisian jokes and was appointed professor at the Hamburg Musikhochschule. Many of his later successful colleagues were discovered and produced by him, such as Hannes Wader, Fiede Kay, Volker Lechtenbrink, the groups Moin and Speellüüd. He also produced his English colleagues Alex Campbell and Harvey Andrews. Kiesewetter could have received many honours for his artistic successes in the past. But he did not want the 'Hermann Löns Medal' any more than the 'German Record Prize' or the 'German Cabaret Award'. "I just didn't want to be mentioned in the same breath as some of the other prizewinners," he said as a reason. Once, however, Knut Kiesewetter accepted an award - when Prince Wolfgang Ernst zu Ysenburg and Büdingen awarded him the title of 'Knight of the Ronneburg' in 2000 for his services to German jazz.

In 1971 Knut Kiesewetter bought a 300 year old farm in the north of Husum, which has been called 'Fresenhof' since its foundation. He quickly noticed that both the Frisian and the Low German languages were being spoken less and less. At the age of 30 he learned Frisian himself and released his first LP with Frisian and Low German songs in 1976: 'Leder vun mien Fresenhof'. This production was the most successful of his 50 albums (Gold!). Knut Kiesewetter set a veritable North German music wave in motion. Whereby he did not record folk songs, but wrote his Low German and Frisian songs himself. "He has taken away the feeling of embarrassment from the people of Schleswig-Holstein when they talk in Frisian again. Kiesewetter can book this gain for himself," Dieter Kerschkamp and Dietrich Lindau write in an article for the book 'Die große Liedermacher' published in 1981. They attest Kiesewetter's Frisian songs high originality and creative language power. "In contrast to his idyll of country life, which is recited in High German, people of flesh and blood are now appearing, and Kiesewetter is serving reality instead of home-roman lard. Exemplary for the compressed observation of hopelessness is his song 'Dat Watt'. The economic situation of a farmer who can't put his feet under the table and drink tea punch with it is described precisely and without a superfluous word. The man, owner of a mudflat area, commits suicide."

Since 2000 Knut Kiesewetter no longer performs with his High German and Low German songs. He is now only active as a jazz singer and jazz trombonist.