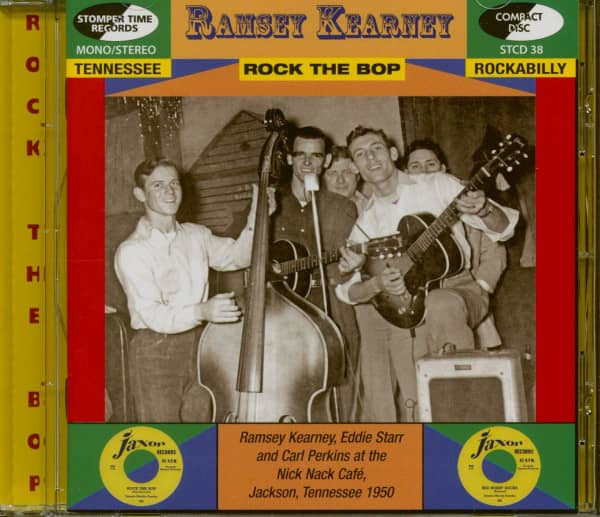 (Ridgetop) 32 tracks with 20 page booklet of stories plus rare photos and discography.

All of Ramsey's hot rocking songs are on this collection along with some very fine Honky-Tonk Country songs in excellent sound quality. Ramsey never became a major star, but this definitive CD collection of vintage Tennessee Music makes for a fine legacy.

The Rockabilly and Hillbilly music of Ramsey Kearney has never been anthologised on CD before. Ramsey recorded first in 1953 and continued through until the new century. This CD covers the best of Ramsey's vintage recordings from 1953-1962 with just 7 post 1962 cuts thrown in the mix. Mastered from the original master tapes by Nick Robbins of Sound Mastering, thus ensuring excellent sound quality.

US Rockabilly and Country Singer & Songwriter

Ramsey Kearney was born in Bolivar,Tennessee and, like many of his generation, grew up on the family farm helping with the chores and picking cotton. Singing whilst picking. helped to pass the long hours and, with the purchase of a guitar aged 13, Ramsey was on his way to being quite an entertainer.

By the time he was 15, he was hosting his own 30 minute radio show in Jackson, Tennessee, playing country records and featuring 'live' acts. One of his regular guests was a teenage Carl Perkins. Moving on to live in Memphis,in 1954 Ramsey recorded a session for Sam Phillips at Sun, but shortly after was called up for Army Service and was shipped out to Korea. Returning to Memphis, Ramsey found that nothing had been released by Sun because Sam was putting his limited funds into a couple of new boys - Elvis Presley and Johnny Cash.

Ramsey went back to Bolivar and joined up with a local band - The Jimmie Martin Combo. Jimmie and Ramsey pooled their resources and built a small recording studio, where Ramsey would record his 1st. single 'Rock the Bop/Red Bobby Sox' for Jimmie's newly formed Jaxon records. Released in 1955, Ramsey's 1st. try at Rockabilly probably sold it's pressing run around Jackson and then disappeared. From 1955 to 1961, Ramsey kept recording, but was unable to secure any new releases. Even the great 1956 recording of 'The Cat Bug Bit', a Rockabilly Classic if ever there was one, failed to pick up a release.

In 1961, Ramsey's luck changed,when he wrote the classic 'Emotions' with Mel Tillis,which became a world wide hit for Brenda Lee. At that point, Acuff-Rose offered Ramsey a new song-writing and recording contract, which saw him recording 6 singles for Hickory during 1961-1963,as well as writing songs cut by Carl Perkins,Ricky Nelson,Eddy Arnold,Warner Mack and Mel Tillis. After the Acuff-Rose period ended,Ramsey soldiered on until,in 1974, he began to take charge of his destiny by forming his own Safari Records & Japonicia Music, through which all of his recordings and songs have been channelled since 1974. In addition, he opened a hugely successful song demo business.