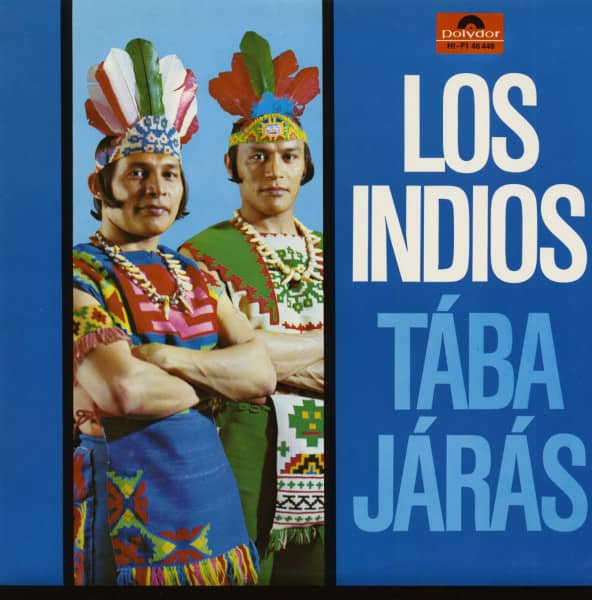 (Polydor) 13 tracks - original 1965 LP - minimal storage wear (cover only)
Original Liner-Notes:
Los Indios Taba-Jaras have been musical ambassadors pleasing large crowds all across the globe for many years with their mag-nificent singing and haunting guitar sounds. Only recently were they finally accorded proper international recognition due to the worldwide success of their rendition of "Maria Elena". This Polydor record release shows Los Indios Taba-Jaras again at their best performing South American Folk Songs.

Quoting the world-famed guitarist Andres Segovia, "Los Indios Taba-Jaras sing vigorously and play with agile and obedient hands". These unique vocal and guitar qualities have made these primitive-born Indians into polished performers.

The Taba-Jaras, a native tribe in the Northern part of Brazil, were discovered by a military and missionary expedition led by Lieu-tenant Moreira Lima. Herundy and Mussapere give the following history: "It was in 1930 that we first had contact with white men. Our village was on the outskirts of a huge jungle and we were a tribe of about 500 Indians.

It was at one of our annual feasts that we heard strange noises. Some of us thought it was a sign from Heaven, others thought it had been the noise of a giant bird falling to the ground. We heard quick shots. Incited by this, our leaders began their war cry, and a small legion of Indians set out to investigate. In a clearing in the forest, we came upon a troop of more than 100 men in uniforms. It looked as if a terrible battle would begin, but suddenly 2 men dressed in black robes who were missionary priests shouted in our dialect, 'Friends, Friends'.

After 2 years among the Taba-Jaras, the soldiers and priests learned the Tupy dialect, and the Indians learned some Portuguese. At their suggestion, Herundy and Mussapere, No. 2 and No. 3 sons of 30 children of one of the Taba-Jara leaders, left to seek their way in the outside world. They traveled on foot for nearly 3 years before reaching Rio De Janeiro where they gained fame singing their primitive tribal songs.

After years of study of classical guitar techniques, the brothers left Brazil to travel the world as accomplished performers. They have appeared in concert at opera houses and other leading rooms in Madrid, Barcelona, Rome, Athens, Lisbon, Havana, Lima, Canada, Switzerland, Mexico, Peru, Venezuela, Colombia, Uruguay and the United States, where they appeared on television with Arthur Godfrey.

The two brothers Muçaperê and Erundi, two sons of a large chieftain's family, belonged to the Tabajara, a tribe of indigenous Indians living in the extreme north-east of Brazil near Cariré in the state of Ceará. In their youth they came to a guitar and brought themselves to play their traditional music on it. They decided to travel the 2000 km across the country to the metropolis Rio de Janeiro to try their luck with their musical art. They were by no means discovered there by a theatre agent who managed them and provided them with concert appearances and, from 1943, a record contract as well. They changed their names to common Brazilian names, but became prominent as the Índios Tabajaras.

They toured South America for six years. They then went to Mexico, where they not only performed for a long time, but also looked for guitar teachers to perfect their guitar playing and nevertheless complement their repertoire in the direction of classical music. In the 1950s, appearances followed in North and South America and an important European tour.

At the end of the 50s, however, the two brothers recorded a number of albums in Mexico, some of which were released in the United States via the small label Vox. Her single María Elena was not yet a great success in 1958, but nevertheless always sold. The title was composed in 1933 by the Mexican Lorenzo Barcelata as a tribute to the then wife of President Pontes Gil and had long since been a million-seller and number one hit in the United States in a sung big-band version by Jimmy Dorsey in 1941. In 1962 their label RCA, within which they were under contract to Mexican branch, decided to release their instrumental guitar version in the United States. Surprisingly the single became a great success and reached the top 10 of the US charts. The following release in Europe and other countries again brought several top 10 placings in Great Britain and Australia.[1]

While Los Índios Tabajaras remained a one-hit wonder in the charts in the majority of countries, they were able to place the equally named album María Elena in the top 10 of the album charts in the United States and with Always in My Heart they had a smaller hit afterwards.

At the end of the 1960s they moved from Brazil to the United States and published other albums until the 1980s. Later Antenor Lima withdrew from music. He is now deceased. Nato Lima continued to release music until the 2000s in connection with his Japanese wife Michiko, who is also a guitarist.