Sixty years after its heyday, a thriving subculture continues to celebrate Rockabilly music in the 21st century, with thousands of fans attending hundreds of festivals and gigs around the world each year. Among the countless bands catering for this audience, those that play in a purely Rockabilly style are often mediocre at best, churning out uninspired covers of the same tired standards. Meanwhile the bands that are good frequently have little discernible Rockabilly in their sound. The Texas trio High Noon achieve the rare distinction of playing a purist vision of Rockabilly that sits firmly within the genre, yet remains modern, innovative and exciting. Despite their relative lack of mainstream fame, Shaun Young, Sean Mencher and Kevin Smith have had an immense influence on generations of revivalist acts, and done more than almost anyone else to revitalise the US Rockabilly movement since the 1980s.

Vocalist Shaun Anthony Young (born 22 January 1969, Wheatridge, Colorado) was first exposed to 1950s music via his parents' record collection. "My Dad is a big Buddy Holly fan and both of my parents love the Everly Brothers. They would sing Everly songs in harmony together when I was young.  Mom liked Ray Price, George Jones and Elvis. My dad was stationed in Korea in the early '60s. He had a reel-to-reel recorder that he'd record armed forces radio shows on, and he'd record all of his buddies' LPs. So I got into those things when I was a kid. Those armed forces radio shows were the first place that I heard 'Summertime Blues' by Eddie Cochran. I just really liked that sound. After digging into their records I started to search out stuff myself and found out about Gene Vincent, Johnny Burnette, Sid King and all the classic Rockabilly."

Bassist Kevin W Smith (born 12 December 1967) also found roots music via his parent's records. "My Mom and Dad had records lying around, from Elvis to Willie and Waylon, to bad pop stuff like Supertramp. I loved playing them, and I loved the Elvis stuff the most."

"When I was about 11, I was walking home from school and someone had thrown their parents’ 45s all over the neighbourhood. I grabbed a bunch and took them home to listen to. The best two I found were Buddy Holly and the Beatles. 'She Loves You' and 'Peggy Sue' blew my mind! I wore them both out. The only other music I heard back then was album rock on the radio and it was hard for me to relate to the sound. I wanted to hear the guitars; I wanted to hear the room! The minimalism was what attracted me. A little later, in the early days of MTV, they played punk and roots bands had that minimalist sound and feel that I was craving but never heard on the radio. Then the Stray Cats hit on MTV and put it all together. They hooked me on the modern idea of Rockabilly."

"I met a few Rockabilly guys in Denver about that time, including Todd Wulfmeyer, who had just met Shaun and was joining the Shifters. Pete Nalty from the local band Bop Street worked at Wax Trax records in Denver, and he had great taste in music. Through him I found out about Howling Wolf, Joe Clay, Ronnie Self, Ronnie Dawson etc. The Bop Street guys would sneak us into clubs to see them play (we were underage) and we saw them open for that Paladins. I'd never seen an upright bass player, much less one like Thomas Yearsley. That was what I wanted to do."

Shaun founded the Shifters with some schoolmates in late 1986. They were soon playing local gigs in the Denver area, building up a loyal following among the nascent Rockabilly revival scene that was gaining momentum in the US at that time. By the fall of 1987, Kevin Smith was part of the line-up. "When Todd joined the Shifters, I started going with him to their rehearsals, and their bass player rarely showed up. I knew enough music to get through a couple of tunes on bass, so I eventually got the gig!" 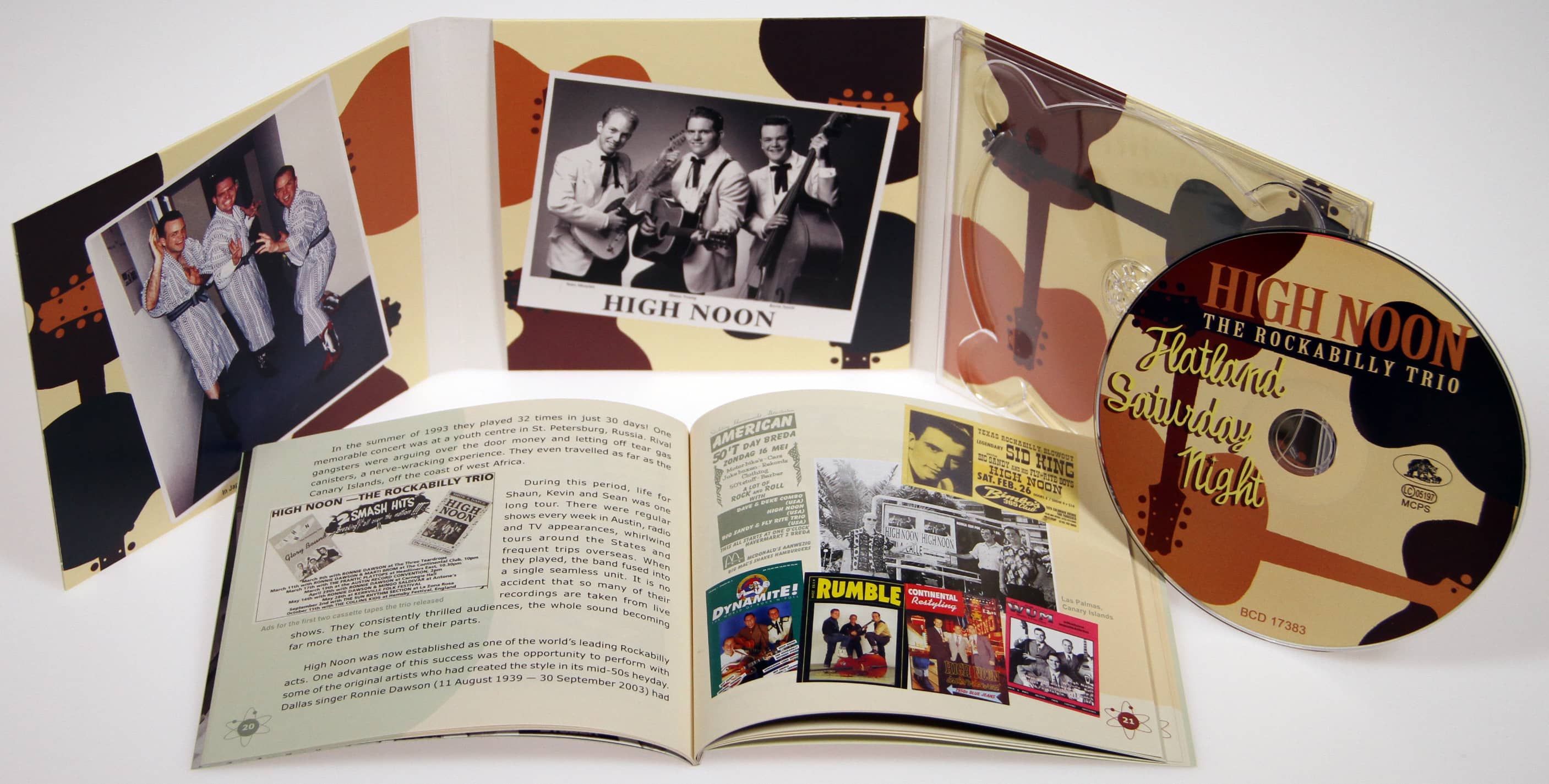 Today, Shaun and Kevin are dismissive of these first forays into professional music, but the little that survives of the Shifters' recordings demonstrates a confidence and ability that belied their callow teenage years. As their reputation grew, bookings came in from further afield, and in January 1988 the Shifters toured through Texas. Amazed by the scale and quality of live music in Austin, in less than a month the band had left the snowy slopes of Colorado behind and relocated permanently to the buzzing city.

At the same time, guitarist Sean Robbin Mencher (born Washington DC, 16 March 1961) was being drawn to Austin for similar reasons. The wide range of roots music acts that pass through Washington, along with a thriving bluegrass scene and local Rockabilly acts such as Tex Rubinowitz and Danny Gatton, had motivated Sean to take up the guitar at 18 years of age. Hours of daily practice led to a distinctive thumb-picking style inspired by his guitar hero Merle Travis, plus a strong jazz influence from players such as Charlie Christian and Oscar Moore. Eager to be a professional musician, it was inevitable that his musical highway would also lead to Texas. It did not take long for his talent to be spotted by the Austin cognoscenti. There were steady bookings with the country band Chaparral and the acclaimed singer Jimmie Dale Gilmore, among others. It was only a matter of time before the new arrivals met.

Sean first saw The Shifters at the Black Cat Lounge in Austin, in the early spring of 1988. He immediately recognised that these were kindred spirits in their musical vision, so he made a beeline for Shaun and Kevin the moment they came off stage. Talking animatedly until late into the night, the three young men explored their mutual passion for mid-‘50s music, and their shared desire to faithfully recreate it. They agreed to get together for a jam session at the earliest opportunity. Kevin picks up the story: "After we got to know Sean a little better, we discussed our common love for the stripped down Sun Records-type sound and got together to play a little. I hadn't really started playing upright yet, but we had a blast! In the mean time, The Shifters had broken up, and Todd and I got offered a chance to play with our friends Bop Street in Denver in their new band called the Jinns. I moved back home and realized that I wanted to play upright, and that might not happen in Denver. I moved back to Austin and we got to work right away."

In the asphalt-melting heat of late August 1988, Shaun, Sean and Kevin gathered in a cramped garage (where else?) in a down-at-heel district of Austin to play together as a band for the first time. They started with the big bang of Rockabilly, by playing all of Elvis Presley's seminal Sun recordings in the order they had been originally released.  Moving on to early classics by Buddy Holly, Carl Perkins and others ("a top 40 of Rockabilly " as Shaun describes it), they realised that were creating  something special that deserved a wider audience. The band needed a name for their first public performance. Inspired by the western she had seen that afternoon, Sean's then-wife Leslie suggested they be called High Noon. The name stuck.

The trio seized every opportunity to play, with gigs on four or more nights every week. When there was no gig they rehearsed, developing and writing new material. There were early morning outdoor shows at the Austin Farmers Market from 10am to 2pm. The band was paid in produce! A pound of okra or a pound of coffee, it was one way to keep the food bills low.

The trio were certain of their objectives from the outset. "When I see old video of High Noon I'm surprised at how much we sound the same now as then," says Shaun Young. "We did however evolve and refine the sound, becoming better players and songwriters as we went along. I think we all had a certain individual style that just meshed real well and produced a strong combined result." Sean Mencher explains further, "Once we three had found the right ingredients to 'cook' with, we strived to be our best, in service of the sounds and feeling that our favourite rockin' music gave to us. We wanted to make, and contribute, and carry-on the tradition, and share the music.  Remember that this was before the internet or mobile telephones. So we searched the hard way, in person, for the answers that would help us in our somewhat quixotic quest. For example, when we toured through Nashville, Tennessee for the first time, I looked up Scotty Moore in the telephone book and we called him from the pay phones at the gas stations. We found out where he was working, drove over there, and inundated him with questions, like 'How did you get the sound? Why did you use a thumb pick? How did Bill Black get the slap sound?' etc."

High Noon's long association with Finland began in May 1989, when they met Janne Haavisto...