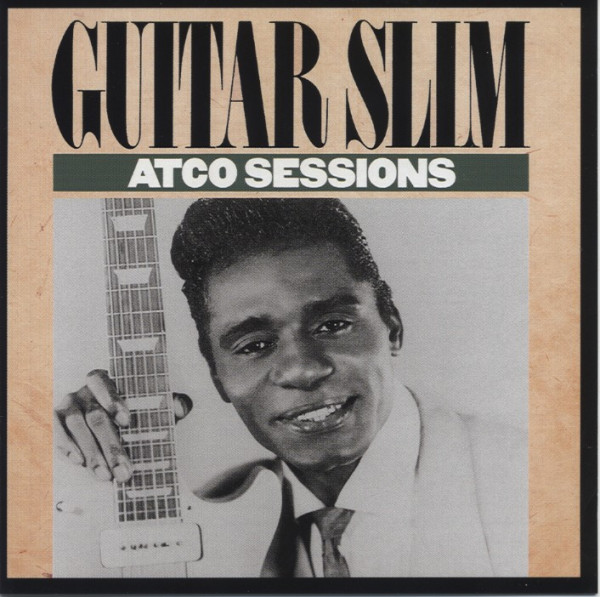 Guitar Slim and His Band

Guitar Slim and His Band

The Things That I Used To Do

Talk about outrageous showmanship, Eddie 'Guitar Slim' Jones wore bright red, blue, and green suits and shoes—and dyed his hair to match! He'd enter and exit venues playing his axe via a 200-foot cord while riding the shoulders of a muscular roadie. And he'd turn up the volume on his box to the boiling point—all treble and no bass, through tinny speakers—to achieve a biting distortion anticipating rockers more than a decade down the line. People across the South took notice fast.

"He was incredible. He had some kind of charismatic thing about him that he drew people before he even started making recordings. He'd just go somewhere and perform, and the next time he'd go back there, there'd be a mob," said his New Orleans disciple, the late Earl King. "There'd be crowds of people, you know, word of mouth: 'Guitar Slim is coming back here!'"

People in the New Orleans neighborhood where he lived took notice too. "Eight o'clock in the morning with the amp cranked up, man, you could hear him two blocks away," said Earl. "They wanted to put him out of the hotel where he was staying because of the noise, but he wouldn't pay 'em no mind. Nobody at that time had no kind of rig like Slim. That was unheard of. Everybody had those little tiny amps, and Slim used to use the P.A. system with big huge speakers. Some of his own inventions. What a character, man!"

Born December 10, 1926 in Greenwood, Mississippi, the Delta bluesman found his way to New Orleans by 1950, when he was featured at Frank Painia’s Dew Drop Inn. Imperial took a chance on Slim first in '51, but neither those two singles nor one for J-B the next year sold. Painia hooked the lanky guitarist up with bassist Lloyd Lambert's band and got him an audition with Johnny Vincent, then working as a Specialty Records A&R man. On October 26, 1953, Slim went into Cosimo Matassa's J&M Studio in New Orleans to wax his first date for Specialty with Lambert's crew: drummer Oscar Moore, four horns including tenor saxist Joe Tillman, and young moonlighting pianist Ray Charles, who also handled the arranging.

Slim's timing eccentricities meant that each song cut that day required numerous takes, including his masterpiece, The Things That I Used To Do. The horns sway, Slim testifies vocally with sanctified passion, and his guitar rings with raw emotion (Brother Ray's joyous 'Yeah!' on the final break probably indicates how happy he was to get a releasable take). Specialty boss Art Rupe wasn't impressed, telling Vincent his job was on the line if the record bombed. Johnny had the last laugh when Slim sat atop the R&B charts for 14 weeks at the start of '54. Things even dented the pop hit parade, peaking at #23—unheard of for a Southern blues.