(Goofin' Records) 12 tracks - including the all timel club monsters ' Heart To Spare ' and 'Like A Wolf'.
Re-pressing by popular demand!***** 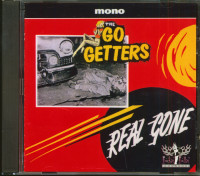