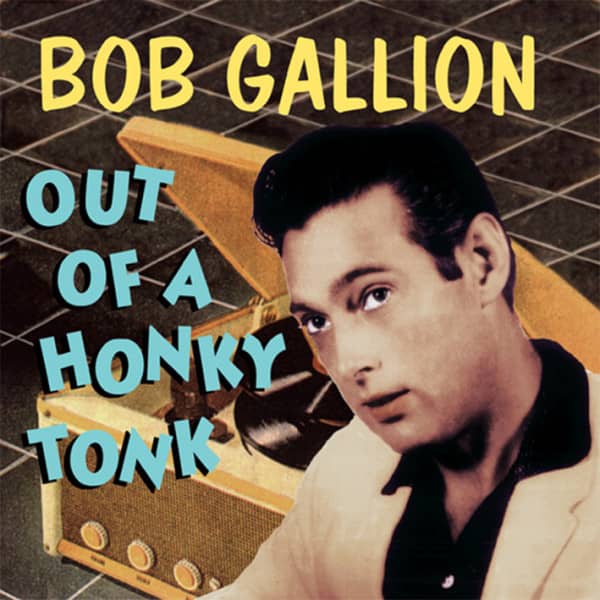 Bob Gallion: Out Of A Honky Tonk

1-CD with 16-page booklet, 20 tracks. Playing time approx. 46 mns.
Jumpin' Bob Gallion is best remembered for a strong of hits on Hickory in the early to mid-1960s, like Wall To Wall Love and One Way Street, but his earlier recordings for MGM from 1956-59 are revered by both fans of hardcore country and by aficionados of rockabilly and rock 'n' roll. A strong-voiced honky-tonk singer in the Hank Williams tradition, Bob Gallion dabbled convincingly with rockabilly in his earliest sessions, cutting sides like My Square Dancin' Mama (She's Done Learned To Rock 'n' Roll).
Even on his toughest, most rocking sides, however, Bob Gallion remained a country singer in the truest sense, with a raw and classic voice. This collection contains Bob Gallion's entire MGM output, fantastic sides like
Trademark On What I've Found, Hey, Mr. Bartender, and Baby, Love Me, as well as four sides never before issued - a long overdue collection by a sadly underrated singer.

Article properties: Bob Gallion: Out Of A Honky Tonk

Out Of A Honky Tonk 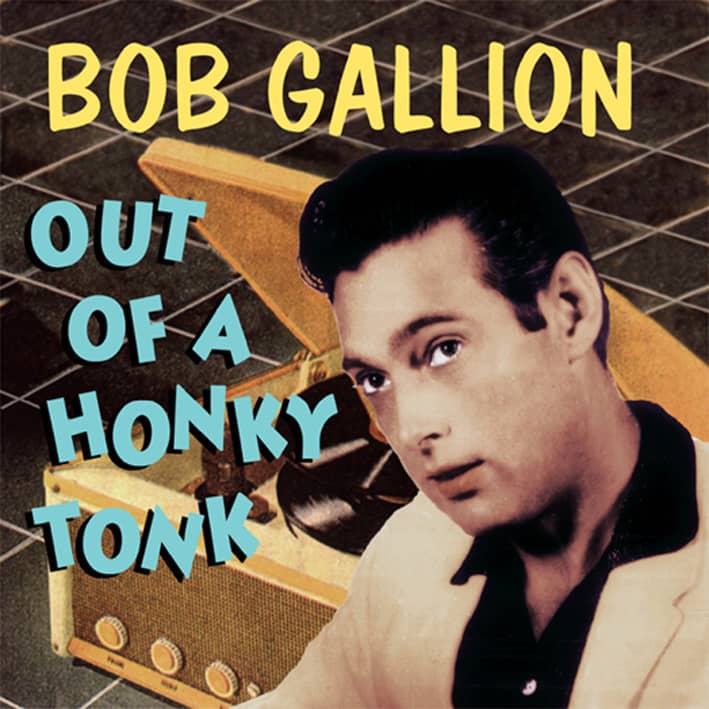 Robert H. Gallion was born April 22, 1929 in Ashland, in the northeast corner of Kentucky where it bordered both Ohio and West Virginia. He was reared in Columbus, Ohio, taking up guitar at an early age. According to Ivan Tribe, he was working professionally in the tri-state area by age 20. His early radio experience included a stint at WTCR in Newark, Ohio, and he later also worked at WCLT there. Sometime in the early 50s he joined Wilma Lee and Stoney Cooper's Clinch Mountain Clan at the WWVA Jamboree in Wheeling. He formed his own Country Boys around 1952, appearing regularly at Wheeling through 1955.

In 1955, he reportedly formed another band, the Play Boys, and by the following year had become a regular on KWKH's Louisiana Hayride. He soon signed to MGM, and to a writing contract with Acuff-Rose. A staunchly and unashamedly country singer and writer, he was in some ways the right man at the wrong time. Rock 'n' roll was beginning to explode widely, and country sales had been in eclipse for some time. Still, rockabilly was country music -- at least of a sort -- and Gallion, with more than a hint of Hank Williams' bluesier, jumping Move It On Over/Lone Gone Lonesome Blues side in his own style, was well-equipped to straddle the fence. Just a month before Gallion made his MGM debut, Johnny Horton had cut his first Columbia session in a style that successfully accommodated rock 'n' roll while still being unabashedly country, and Gallion seemed poised to mine the same lode.

Gallion's first MGM date took place at the RCA Victor studio in Nashville on February 2, 1956. Unfortunately, no session data for any of Gallion's MGM sessions survive, so the identity of the studio backing musicians is open to conjecture. However, the band at this initial session probably includes Chet Atkins -- listen to the guitar solo on Trademark On What I've Found -- and other A Team cohorts. It was an engaging and energetic session, at any rate, all four songs written by Gallion. Ultimately, the most important side may be Your Wild Life's Gonna Get You Down, a decent sized hit for Kitty Wells in 1959, but everything was catchy, nicely realized. My Square Dancin' Mama walked about as fine a line between hillbilly and rock 'n' roll as possible, as it's title emphatically underlines, and succeeds as both. The fine, rollicking Trademark On What I Found was melodically derivative of Salty Dog Blues and True Blue Papa and found Gallion slightly resembling another strongly country singer of the era who could rock when he wanted to, Frankie Miller.

Rock 'n' roll was an all-out phenomenon by the time Gallion recorded again in November. In the meantime, he settled in as a deejay WKAB in Mobile, Alabama, and appeared regularly on the Hayride. In Mobile, he forged a songwriting partnership with the excellent Luke McDaniel, a country singer and writer who'd recently dabbled in rock 'n' roll for Sam Phillips' Sun label in Memphis and had used (and would again) the pseudonym Jeff Daniels for a rock 'n' roll release on the Meladee label. Prior to that, McDaniel had waxed sides for Trumpet and King, including at times forward-looking classics like Whoa Babe and I Can't Go.

Despite the market, and despite McDaniel's own recent forays, the songs Gallion and McDaniel wrote together were ardently country, and Gallion had obviously decided to go his own way, to not remake himself as a rock 'n' roller as so many others were trying to do. Both Out Of A Honky Tonk and Hey! Mr. Bartender, though the latter was an uptempo romp,were classic honky-tonk songs and fine performances. If there was more than a Hank Williams touch here and there, it was even more so on the tough I Want Her Blues, arguably the highlight of a strong session. It was co-written with Mattie O'Neil, one of the pen names of the prolific Jean Chapel, who also wrote the ballad You've Gotta Have A Heartbreak (To Know How To Love).

There were no further recordings for well over a year and by the time Gallion returned to the studio for MGM in February 1958, things had changed considerably. Country music had shifted to center to pick up disaffected pop fans and others in order to compete with rock 'n' roll -- and reflect the changing, increasingly urban American landscape. Steel guitars and fiddles had become few and far between, replaced by pop-ish vocal choruses, and in some cases string sections. At the same time, rock 'n' roll was being watered down, as well -- at least so far as major label recording was concerned. This isn't to say that edgy, real country and tough rock 'n' roll didn't survive, even thrive in, say, 1958-59 and beyond, but they did so less in the mainstream, and more on small labels. Major label recording of all types was sounding more and more alike, more deliberate and painted-by-numbers.

But gems slipped through the cracks and one of these slipped through at Gallion's February 12 date at Owen Bradley's studio produced by Jim Vienneau. The song was Gallion's own rather uncharacteristic Baby, Love Me, a hard-edged, mid-tempo rocker sung with a tough vigor that renders the somewhat less convincing vocal group and the competent but hardly inspired backing irrelevant. Even if there's a cookie-cutter precision to his surroundings, Gallion overrides them and the side is justly revered by rockabilly fans. The other two sides are more typical of what was coming out of Nashville at the time: quasi-pop, somewhat saccharine. Both I Miss You, which was coupled with Baby, Love Me, and Foolish Young Heart are decent enough songs, and the results are pleasant, but the spare, undistinguished instrumentation and the ubiquitous vocal group fills and responses, leave little room for inspiration. I Miss You is nice, country-pop, though Gallion's voice -- even as it was on the rocking Baby, Love Me -- was as strongly country as ever. This is less true of Foolish Young Heart, which Gallion wrote with Luke McDaniel. The country edge is more smoothed out, and Gallion sounds particularly uncomfortable on the bridge, where his voice cannot quite hit the low notes that he sings under the vocal chorus. The song was, not surprisingly, left unissued...