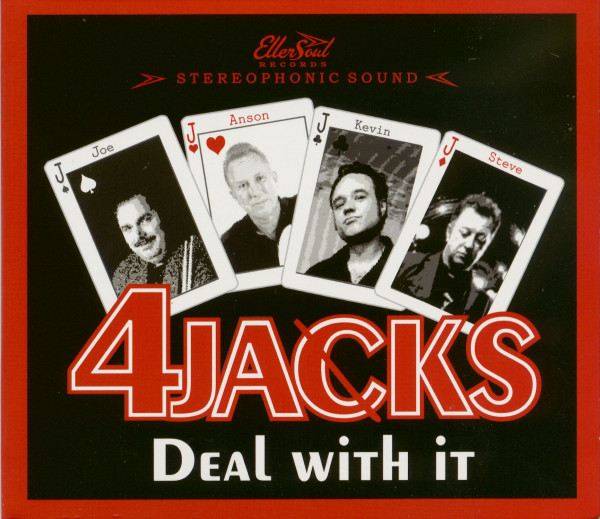 Four Jacks: Deal With It

Article properties:Four Jacks: Deal With It

The Last Of The Good Rocking Men

During their brief time in the spotlight on Syd Nathan's Cincinnati-based Federal Records (1952 was the extent of it), The Four Jacks provided tasty vocal backing for three female vocalists as well as committing two singles of their own to tape. Bass singer Ellison White (formerly with gospel's pioneering Wings Over Jordan Choir), first tenor Bowling Mansfield, second tenor Buell Thomas, and baritone George Comford comprised the short-lived quartet.

The Four Jacks debuted on Federal with a pairing of their own, You Met A Fool b/w Goodbye Baby. That June, the logo released a single starring Shirley Haven on one side and Cora Williams on the other, the Jacks backing both. Federal also released another single that same month placing the Jacks behind Lil Greenwood (on Monday Morning Blues, the entire crew was joined by piano-playing bluesman Little Willie Littlefield) that had been done on April 28 in Los Angeles. The Haven, Williams, and Greenwood sides were all reportedly cut on the same day.

The quartet of listed songwriters on The Last Of The Good Rocking Men are an intriguing lot. Ralph Bass was Federal's A&R man and producer of Sixty-Minute Man. Mario DeLagarde was a busy L.A. bassist who played on Greenwood's session, and Rick Darnell was a West Coast songsmith whose credits included co-writing Roy Hawkins' 1951 hit The Thrill Is Gone, a blockbuster for B.B. King almost two decades down the line. As for the Ray Charles Robinson listed as their collaborator: soon-to-be-star Ray Charles' actual surname was indeed Robinson, so who knows? Brother Ray switched his recording home from Swing Time to Atlantic in 1952 and was still scuffling, so anything's possible.

October brought more Jacks-backed offerings on Federal by Shirley - a two-sider this time - and Lil (the jumping Grandpa Can Boogie Too, a DeLagarde/Darnell copyright done at that April 28 date), but no more singles by the quartet itself. By the dawn of 1953, The Four Jacks had disappeared from Federal's roster. Thomas went solo and made five singles for Dootsie Williams' L.A.-based DooTone imprint.