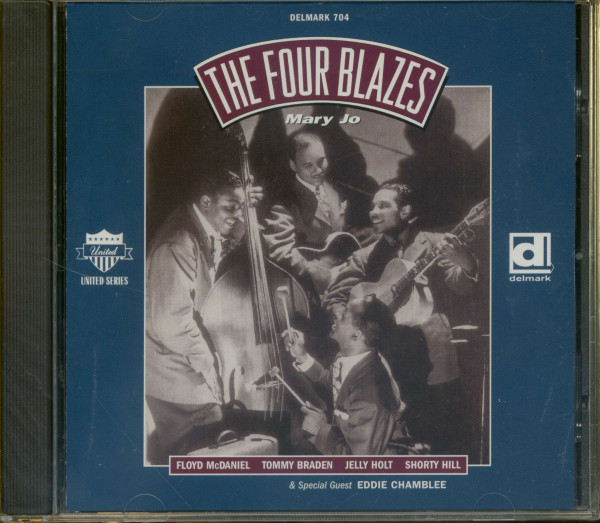 One of the top R&B records of 1952, a tribute to that legendary woman who 'went up to Alaska just to melt the snow', 'Mary Jo' provided a moment in the national spotlight for one of Chicago's hottest vocal combos. The single was released in April of '52 and entered the national charts in the middle of July. It moved rapidly to the top, displacing Lloyd Price's 'Lawdy Miss Clawdy' as the #1 R&B song in the nation at the end of August.

Born in the waning years of the Depression, The Four Blazes brought vitality and showmanship to the early years of R&B. Bassist Tommy Braden was the main lead singer while all members provided backup harmony vocals. 'Jelly' Holt was the founder and drummer in the group, while Floyd McDaniel and 'Shorty' Hill played guitars. (Floyd stayed active in music throughout his life including the 1991 album Let Your Hair Down! and the 1994 recording West Side Baby.) With special guest Eddie Chamblee on tenor sax.

The days of the self-contained units - groups that sang and played their own axes like The Cats and The Fiddle and Steve Gibson's Red Caps - was nearing an end, but in Chicago, The Four Blazes upheld the tradition splendidly. They played all over town, from the West Side to the North Side to the Loop, swinging all the while.

The Blazes came together in 1940 with drummer Paul Lindsley 'Jelly' Holt, guitarists Jimmy Bennett and William 'Shorty' Hill, and bassist Prentice Butler, though Bennett was replaced the next year by Floyd McDaniel, born July 21, 1915 in Athens, Alabama. McDaniel arrived in Chicago in 1930, and in '31 joined The Rhythm Rascals, a washboard band that played at the 1933 World's Fair. "We started here on the beach with that, right there on 31st Street," said the late McDaniel. "Then we took to the streets, played on the street corners. I was a teenager." They later journeyed to New York, gigging as The Cotton Club Tramp Band for four years before Floyd joined the Blazes.

"I came back around '40, and that's when I met one of those guys," he said. "We played a Christmas party together, and then we started putting together this little group, the Blazes." McDaniel switched to electric guitar in 1941. "Charlie Christian was my idol in that," he said. "I was more into rhythm." The group added pianist Ernie Harper in 1945 after McDaniel was temporarily sidelined because he burned his hand on a shorted microphone in Pittsburgh, making them The Five Blazes. They debuted on shellac in '47 on the Aristocrat logo (Leonard Chess was one of its principals) with Chicago Boogie, featuring Harper's lead vocal. Floyd fronted their next Aristocrat 78, a jivey All My Geets Are Gone.

Harper exited and wasn't replaced. Before long, The Four Blazes hired a new bassist. "Thomas Braden came in the '50, because Prentice Butler - I guess things got a little slow, and he had to take a job. He left the band, and that's when we found Thomas Braden," said McDaniel. "He used to dance with that bass, just like it was a girl."  The Chattanooga, Tennessee-born Braden, formerly with Chicago saxist J.T. 'Nature Boy' Brown's combo, became their primary lead singer. "He could sit down and write things, and he could play that bass too," said McDaniel.

On January 4, 1952, the Blazes cut two numbers in Chicago for Universal Recording boss Bill Putnam, who sold the masters to Lew Simpkins and Leonard Allen's United Records. One of them was the jumping Mary Jo, penned and fronted by Braden. That August, the tune proudly sat atop the R&B charts. He also wrote and sang the group's followup hits Please Send Her Back To Me and Perfect Woman.

McDaniel sang lead on the Blazes' revival of Duke Ellington's 1937 platter I've Got To Be A Rug Cutter (the Blazes shortened the title). Cut July 4, 1952, it features their strong vocal harmonies in addition to their sure-handed instrumental chops. The Blazes stayed on United into 1955, touring extensively. “We went all over everywhere. We went to California. We went to Texas, Canada,” said McDaniel. Braden got top billing on their last United single, where they were confusingly called The Blasers.

The Four Blazes were kaput by the end of '55 (Braden died in 1957), but McDaniel mounted a comeback campaign in the '90s, playing jump blues with a horn-infused combo and making CDs for Delmark. He died July 22, 1995. "I enjoy it all, man," the good-natured McDaniel said, "especially when the people enjoy it."