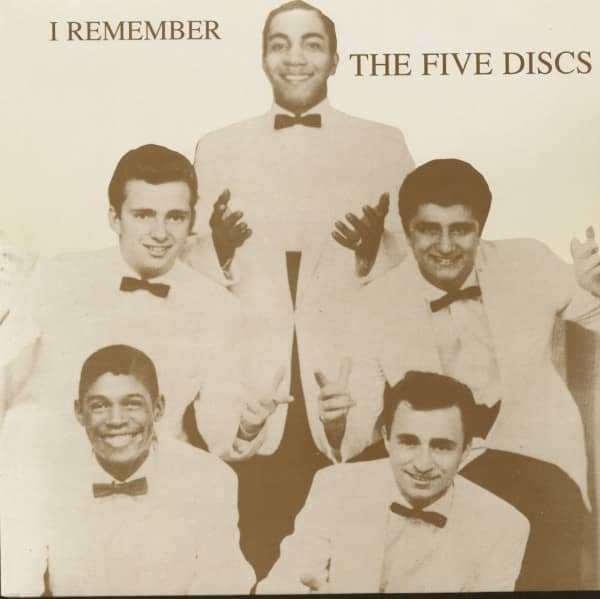 The Five Discs: I Remember (LP)

(Tone Records) 14 tracks
The Five Discs started singing in 1957 on street corners in the East N.Y. section of Brooklyn. They first performed as The Flames at church dances and clubs around the New York area. Original members of the group were Mario D'Androtti (lead), Joe Barsalona (baritone), Andrew Jackson (bass), Paul "Beans- Albano (1st tenor) and Tony Basile (2nd tenor). Later Charles DiBella took over the bass.
The group's first record was "I Remember" / "The World Is A Beautiful Place" in 1958. The group wrote the song, made a demonstration record and brought it to Gene Schwartz, president of Laurie Records. Gene liked the sound and released it on the EKE label which was a subsidiary of Laurie.

The song made a little noise around the New York area and RCA became interested in it. They relased the song on their VIK subsidiary in April 1958 . When VIK folded, it was again released on RUST, a Laurie subsidiary, in 1960. Therefore, the record was out at almost the same time on three different labels. The group stated that "I Remember" was a local hit and reached number twenty on the charts, however the record had no standing in the national charts.

The second record the Five Discs recorded was "Roses- - released on the DWAIN label in 1959. The flip side is an excellent tune called "My Chinese Girl". This record was re-released on the MELLOMOOD label in 1964. About this time, Mario D'Androtti left the group and was replaced by Frank Arnone.

Later the group made a studio demo of an original called "No More Fooling Around", whereof the flipside was called "I Love You". The song ended in 1961 under the title "I Don't Know (What'll I Do)" on the B-side of their next release, -Come On Baby" for the YALE label. The record didn't do much and the group tried again in 1961 with "Adios" / "My Baby Loves Me" on the CALO label.

Then the group met Don Ames, signed a contract with him and released "Never Let You Go- and "That Was The Time" on his CHEER label in 1962. CHEER was part of the BLAST complex of labels. The original demo title for "Never Let You Go" was "You Belong To Me". "Never Let You Go" was played on Murray The K's show and won record of the week. It reached number 40 on the charts but did not climb higher.
The Five Discs also recorded under the name "The Boyfriends" in 1964. The songs were "Let's Fall In Love- / "Oh Lana" on the KAPP label. Eddie Pardocchi, later a member of Vito & The Salutations, became the lead vocalist of group around this time and replaced Tony Basile.

Around 1967 they teamed with Ernie Maresca and made a recording of an old Sam Cooke tune, "Bring It Home To Me-. They billed themselves as The Dawn and the record was released on the RUST label. Therefore, they had made two releases also as The Dawn for Laurie records.

When they tried their luck again in 1972 for Laurie, they almost had a big hit with "Rock & Roll Revival". The song wakes memories of all the famous "oldies" and was often played in the New York area at this time of the first R&R revival.
The Five Discs are one of the few white groups who were able to capture the true Rhythm and Blues sound. Their harmony was excellent and their voices blended well, so they are one of the groups of the fifties you will remember forever.