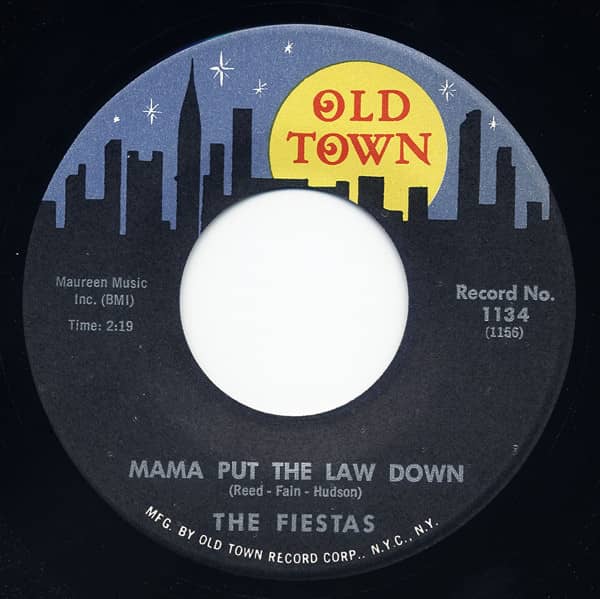 Please inform me as soon as the product is available again.
$6.53 *

The Fiestas: Mama Put The Law Down - The Gypsy Said 7inch, 45rpm

Learn more about The Fiestas
The Fiestas Dollar Bill A group that supplied its own material was worth a lot to... more
Close menu
"The Fiestas"

A group that supplied its own material was worth a lot to record labels, who tended to think of artists as disposable commodities. So it was with The Fiestas.

That wasn't the case with So Fine, their biggest hit. The Fiestas had picked that one up off an obscure 1955 platter by The Sheiks, a Johnny Otis-related group on the West Coast. As The Fiestas' debut outing on Hy and Sam Weiss' New York-based Old Town Records, the rumbling So Fine proved a major hit (it's on our '58 edition of 'Street Corner Symphonies'). Hy discovered lead singer Tommy Bullock, tenor Eddie Morris, baritone Sam Ingalls, and bass Preston Lane rehearsing in the bathroom of the Tribeca Theater in Harlem - quite a nice accidental discovery.

Crafting a followup with the same chart impact was considerably tougher, but Weiss and The Fiestas kept trying. The group-generated Dollar Bill was a fine attempt, its back alley groove and the impassioned high tenor lead imparting a bluesy edge to the proceedings. Cut August 21, 1959, it didn't come out until the spring of '60 with It Don't Make Sense on the other side. Its writer Randy Stewart eventually joined The Fiestas as they delved into more of a soul direction at Old Town (they were there through 1965). Only Broken Heart made a chart impact for the group, climbing to #18 R&B and #81 pop in 1962.

Bullock split for Detroit in 1966 to record with producer Gene Redd (he'd co-written Broken Heart for The Fiestas) in a duo with Cleveland Horne as Tommy & Cleve (their Boo-Ga-Loo Baby ended up on Checker). Morris was reportedly the only original member left in The Fiestas by 1975, when the group reemerged to record for the Stax subsidiary Respect with Stewart co-producing. A '77 foray into disco for Chimneyville with Randy again at the helm completed their discography.