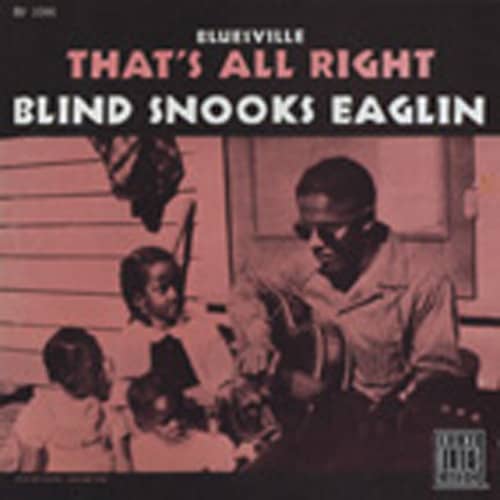 When then-unknown guitar virtuoso Snooks Eaglin was presented on wax in 1959, it was as an acoustic folk-blues troubadour on the Folkways label. Producer Dr. Harry Oster had encountered the blind guitarist playing for some extra coin on the streets of New Orleans, unaware that Snooks was usually fully plugged-in and specialized in rocking Crescent City R&B. That's largely how he was recorded after his debut; Snooks' astonishing versatility and dexterity never ceased to amaze.

Born Fird Eaglin, Jr. in the Big Easy on January 21, 1937, he lost his sight as a toddler from glaucoma and a brain tumor. That didn't stop him from picking up a guitar at age six. Eaglin's mischievous ways earned him his nickname after Fanny Brice's radio character ‘Baby Snooks.' In his early teens, he co-founded a popular young R&B combo, the Flamingos, with pianist Allen Toussaint. Already his chops were mind-boggling.

"He could play like that when he was seven! I heard him on a talent show when he was a little boy," marvels Toussaint. "They called him Baby Snooks at that time. I heard all that guitar, and I thought it must have been a freak show or something, ‘cause children can't play like that!"

Eaglin played behind James ‘Sugar Boy' Crawford on his 1953-54 Checker sides. He developed an emotionally charged vocal delivery enabling him to bill himself around town as ‘L'il Ray Charles.' Such chicanery was no longer necessary after Snooks cut a series of R&B singles for Imperial Records producer Dave Bartholomew in 1960.

There were a lot of lean years preceding Eaglin joining the roster of Hammond Scott's Black Top Records in 1986. His first two albums for the firm, ‘Baby, You Can Get Your Gun!' and ‘Out Of Nowhere,' were spectacular tributes to the classic New Orleans R&B sound, and 'Teasin' You,' cut in October/November 1991 at the same Ultrasonic Studios as Robert Ward's above track with Porter, Berfect, and Kazanoff returning as sidemen alongside drummer Herman V. Ernest, III and veteran Houston tenor saxist Grady Gaines, was if anything even more exciting.

Red Beans capped off ‘Teasin' You' in blistering fashion. Credited to Muddy Waters—hardly a Crescent City denizen—it's associated with Snooks' old cohort, pianist Roy ‘Professor Longhair' Byrd. Eaglin unleashes one storming solo after another, leaving space for Berfect and Gaines to have a say before he sails back in, his picking melding rapid-fire lead and occasional rhythm parts into a seamless whole. Snooks' repertoire of obscure blues and R&B songs was so vast (he was hailed as a "human jukebox") that it sometimes left his sidemen scrambling.

"He pulls songs out on me every time I play," said Porter prior to Eaglin's passing. "At the Jazz Festival, I had a set list for the horn section to follow. Snooks played about three songs that wasn't on the list. I said, 'Snooks, you didn't follow the list!' And he said, 'I couldn't see it!'"

Conversant with funk, calypso, or anything else that struck his fancy, Snooks could do it all until his February 18, 2009 death of a heart attack in New Orleans.