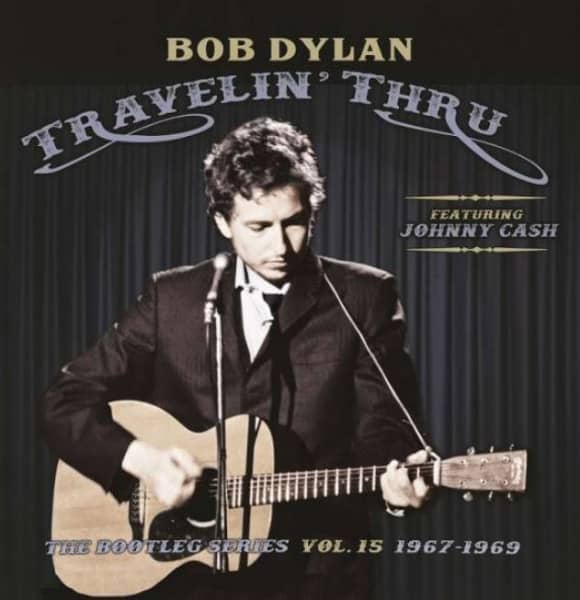 The new chapter in this highly acclaimed series presents 47 previously unreleased recordings from Dylan's 1967-1969 recording sessions in Nashville, including outtakes from the albums John Wesley Harding, Nashville Skyline and Self Portrait, as well as recordings from the 1969 studio session of Bob Dylan and Johnny Cash.

CD 1 of "Travelin' Thru, 1967 - 1969: The Bootleg Series Vol. 15" offers alternative takes of songs from the albums "John Wesley Harding" (Nashville Sessions October 17th and November 6th 1967) and "Nashville Skyline" (Sessions February 13th and 14th 1969) and presents with the song "Western Road" a completely unknown song from the sessions of this album.

CDs 2 and 3 of the set focus on Dylan's collaboration with Johnny Cash and include the legendary recording sessions of the two icons at Columbia Studio A in Nashville. In addition, these CDs also feature recordings by Dylan and Johnny Cash, recorded at the Ryman Auditorium during the ABC TV show "The Johnny Cash Show" on May 1, 1969, as well as Dylan's recordings with bluegrass banjo legend Earl Scruggs for his PBS TV special "Earl Scruggs: His Family And Friends".

The year 1967 was a groundbreaking and surprising musical transformation for Dylan. While pop music became increasingly surreal and psychedelic in the wake of Dylan's 1965/66 trilogy "Bringing It All Back Home"/"Highway 61 Revisited"/"Blonde On Blonde", Bob Dylan retired from public life for a while after a motorcycle accident in July 1966. He had already recorded "Blonde On Blonde" in Nashville in February 1966, but at that time with a complete band. When the recordings for the next album "John Wesley Harding" began in autumn 1967, Dylan had opted for a simple, reserved trio solution (Dylan - guitar, vocals, harmonica; Charlie McCoy - bass; Kenneth Buttrey - drums). Dylan said about that time: "I didn't know how other people recorded their albums back then, and frankly that wasn't my ambition either (...). I didn't even need these big productions to feel that way."

Bob Dylan returned to Columbia Studio A in February 1969 to record his album "Nashville Skyline". "Bob asked me if I wanted to be a guest musician on this album," Johnny Cash said in a later interview, "so I drove into the studio, the technicians turned on the tape machines and recorded the approximately two-hour sessions. Columbia Studio A hosted two Dylan/Cash sessions: on February 17 and 18, 1969, with a band that included Rock'n'Roll pioneer and guitarist Carl Perkins on six tracks, including his own composition "Matchbox". One of the most interesting discoveries on "Travelin' Thru" is certainly the Dylan/Cash duet from the medley "Don't Think Twice, It's Alright/Understand Your Man", where two unique singer/songwriters pay tribute to each other with their respective songs.

The all-day Dylan/Cash session on February 18, 1969 included a series of covers and two medleys of Jimmie Rodgers songs as well as the first known version of "Wanted Man", the only version of the song Dylan has ever sung. The week after these recordings, Johnny Cash made "Wanted Man" the first song of his famous San Quentin concert.

In the first episode of the TV show "The Johnny Cash Show" in June 1969, show host Johnny Cash gave his friend Bob Dylan a guest appearance. In the days before and after the "Johnny Cash Show" recordings, Dylan was already working on his next album, which was to be released a year later as the double album "Self Portrait". For the "Self Portrait" session on May 3rd, guitarist Fred Carter joined Dylan's Nashville band. The two songs "Folsom Prison Blues" and "Ring Of Fire", both recorded that day, can be heard for the first time on "Travelin' Thru".