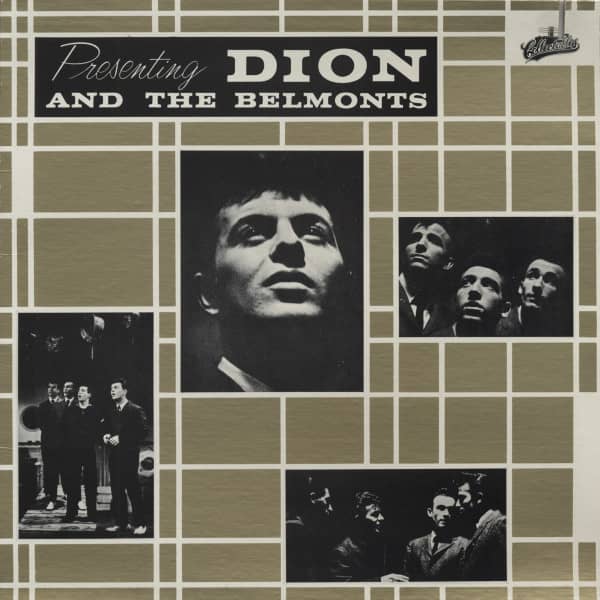 Please inform me as soon as the product is available again.
$16.03 *

About Dion and The Belmonts

You know, it's a pretty unusual thing when four fellows can parlay singing in the subway into a successful career. There are literally hundreds of vocal groups recording these days and thousands more trying.


Dion and the Belmonts grew up together in the same neighborhood, attended the same schools and developed into one of the most popular recording groups in the business today. Even more amazing is that they have been singing together for such a short period of time . . . since February 1958. If you have ever wondered where the name “Belmonts” came from, it was derived from Belmont Avenue in the Bronx, where the boys were raised.


l have never met a group that works so well together whether on the job or at play. They seem to enjoy kidding one another, springing practical jokes on Dion and spending off hours kibitzing and poking fun at one another. On the other hand, their continuous drive to perfect new sounds, ideas, polished choreography and to create a well-rounded act, is an amazing thing to watch. l have never seen young men with such devotion to duty. This is an interesting group of fellows. They differ in many ways. Dion is shy and has an insatiable curiosity about the things around him, Freddie is witty and can be considered the comedian of the group-the boys insistAngelo’s nickname should be “angel” and Carlo is the “slave driver” because he's always searching for new sounds for the group.


They all enjoy diversified interests such as Baseball, Fishing, Guitar picking, Classical music and Photography, but when it comes to work, there is but one purpose: to present Dion and the Belmonts in the most perfect manner possible. It’s this combination of different personalities, young ideas, and enthusiasm that will assure the success of these young men for many years to come.

“Presenting Dion and the Belmonts” contains an interesting variety of songs that display the group's versatility. From “I Got the Blues," (a lowdown bluesy number on which Dion “growls out" a lover's lament, to “You Better Not Do That," (a very cute country song about a young lad just learning about girls), the album swings from the first groove to the last. Of course the album includes their four big hits, “I Wonder Why," “No One Knows,” “Don't Pity Me" and their latest, “A Teenager In Love," with which I am sure you are quite familiar. In addition, their version of a great song, “That’s My Desire,” could very well step out as a single hit. The Five Satins’ hit of two years ago, “Wonderful Girl," is treated in Dion and the Belmonts' inimitable style. A most interesting version of a great standard, “Where or When," completes a truly wonderful album that is aptly entitled “Presenting Dion and the Belmonts.” I like it!