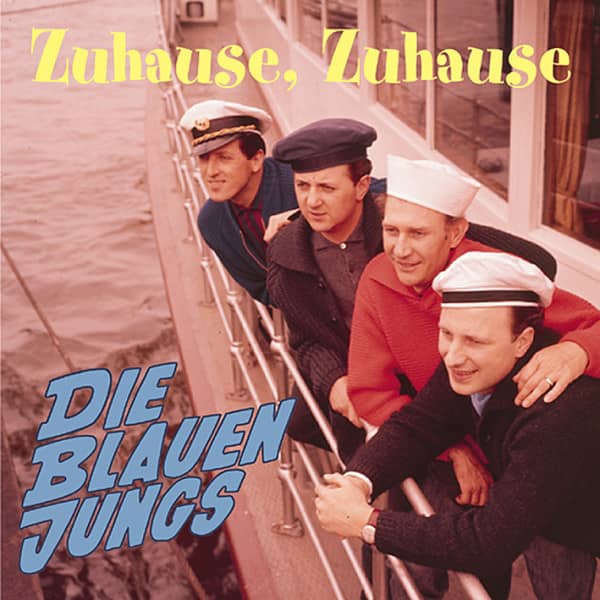 1-CD with 28-page booklet, 29 titles. Playing time approx. 78 minutes.
Whoever says The Montecarlos must also say The Blue Boys! Rudolf Kreuzberger (tenor), Jörg Maria Berg (baritone), Bob Martin (bass baritone) and Rudi Resch (tenor) were also successful in business under this name during the heyday for vocal ensembles. The four singing Austrians were'shipped onto the water' by Vienna Polydor governor Gerhard Mendelson in order to meet the demand in terms of wanderlust, wind and waves that prevailed at the time.
Supplied by composer (and orchestra director) Werner Scharfenberger and his long-time lyricist partner Fini Busch, the high-quality four-man managed a series of ten longing hits between 1957 and 1961, including Home, Home (2nd place in the Hit Parade), Time (2nd place), Distance (5th place) and Santa Catalina, Seven Long Years and When White Clouds Walk. The Blue Boys were also involved in many hit films of those years - as performers and / or as actors in smaller roles they appeared in'Schön ist die Liebe am Königssee','Paradies der Matrosen' and'Mein Schatz ist aus Tirol', among others.

Learn more about Die Blauen Jungs
Before the Blue Boys set out to sail all over the world under blue skies and white clouds to... more
Close menu
"Die Blauen Jungs"

Before the Blue Boys set out to sail all over the world under blue skies and white clouds to live out their longing for the distance and foreign lands in their songs, the titles on their first record were about their homeland. Strangely enough, this was nothing exotic, not the Waterkant or a dreamy maritime town on southern shores - their home, their home, that was - Vienna!

Nevertheless, the name Blue Boys cannot be separated from water, wind and waves. For topics of this kind there were various specialists in the texting and composing guild, for example the renowned team of authors Werner Scharfenberger / Fini Busch. Both always found the right melodies and the right sailor's yarn to introduce record listeners to the dreamy romanticism of the sailor. Between 1957 and 1970, a total of 18 singles, various EPs and even two long-playing records were successfully brought to the customers by the Blaue Jungs. While the majority of the vocal ensembles of that time with a wide variety of themes were often only able to record low to average record sales, the Blue Boys were committed to the seafaring genre, and their success proved them right. Interestingly, many of the great hits about seafaring (such as Lolita's recordings) were produced in Austria - at the Vienna Konzerthaus in Lothringer Straße. The producer Gerhard Mendelson (1913-1976) played a major role in this. His enthusiasm for work and his incredible variety of ideas would have been enough for two to three lives.

For many people, the romanticism of the seafarers was the perfect dream world to escape the sad post-war period. Especially many displaced persons and returnees from the prisoner of war could put themselves in the longing mood of the sailors and their relatives waiting in their homeland. Emotion and romance were booming, especially in the world of hits.

Throughout the 1950s, an unsatisfied longing for Florentine nights, Lake Maggiore, Maratonga, the beach of Havana, and southern nights ran like a red thread. Homesickness and wanderlust were the only constant on the German hit market despite all the latest fashions.

Just like the hits of the Italian wave in the 1950s, maritime music titles invited listeners to dream and forget everyday life for just under three minutes. After a long period of deprivation, many people were able to afford another holiday. The holiday destinations Austria, Italy and Spain were particularly popular. Those who had to stay at home, however, dreamt on the radio or in front of the record player of the distance. Schlager helped with these'journeys' around the world.

The Blue Boys, those were four neat Austrians. Three came from the metropolis of Vienna, the fourth came from the Wachau. They exchanged their black suits, which they preferred as Montecarlos (so their other name), for casual sailor clothes. As blue boys they liked to be photographed with their white sailor's caps and captain's caps for press photos.

Rudolf (Rudi) Kreuzberger (* 09.04.1929 in Vienna) was to become the most productive singer of the ensemble. In 1935, at the side of Paul Hörbiger, he began as a six-year-old singing prodigy. He studied singing at the Vienna Music Academy. As early as 1949 Kreuzberger took first place in a tenor competition in England. From then on he was permanently employed in the Austrian radio as a pop and operetta singer. In 1953 he became a member of the Vienna State Opera Choir. During this time he produced his first records for Elite Special and headed a first vocal group, the Goldene 4 In the following years there were hardly any recordings of vocal or background ensembles in Vienna in which Rudi Kreuzberger was not vocalist.

He remained active in the music business until the 1980s.