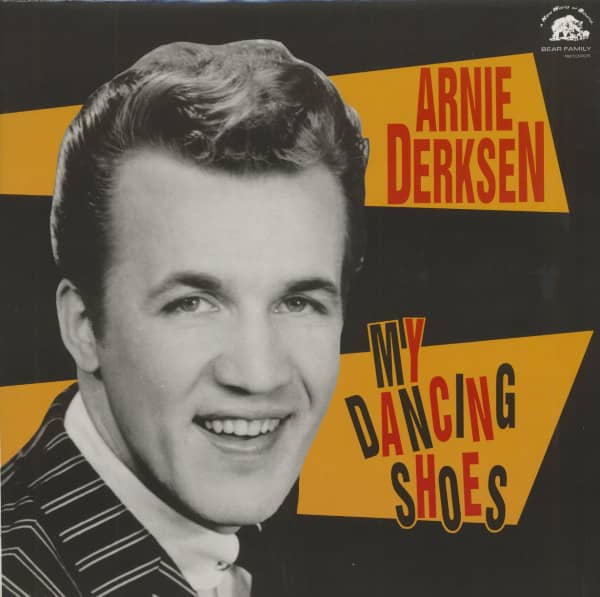 ​Vinyl Weisspressung / Testpressung / Promotion Copy
ARNIE DER KSEN Culturally and climatically, Winnipeg, Manitoba is one of the furthest points in North America from the Southern birthplace of rock & roll. The city also sports a large Ukranian and eastern European population and, in the summer of 1959, one of their number, Arnie Derksen, who had lately espoused rock & roll, looked certain to break out of Winnipeg and capture a wider audience. In common with many young country artists - both American and Canadian - Derksen worked his way up from small dances and local radio shows to recording contracts and a weekly television show.

By 1959 he was on television every Tuesday night in Winnipeg and his Decca single, Let The Whole World Know, was a charted hit on CKY (Winnipeg). Armed with a booking contract from the prestigious Denny agency in Nashville, Arnie must have thought that he was on his way. However, at the point when his career should have taken off, it sputtered. Derksen acquired his first guitar at the age of ten when he traded the old grey mare that his father had given him for a guitar. He joined the family quartet two years later, singing in churches with his parents and eight year old sister. There was a family move to Calgary, Alberta, when Arnie was sixteen, and he soon began to make appearances on local radio. He formed the Victory Trio when he was twenty and they,toured Northern Alberta, Victoria B.C. and Portland, Oregon before Arnie left to go solo in 1953 at the age of twenty-five.

Arnie was on his way to Toronto in 1956 when he was sidetracked by his friend Vic Siebert in Winnipeg. Like many western bands, S iebert's Sons of the Saddle was starting to feel the pinch from the encroachments of rock & roll. He thought that Derksen's good looks, his flair for rock & roll vocals and guitar work might help bring the Sons of the Saddle to a wider audience - or at least help them keep the one they had. Arnie accepted their offer and joined Vic and his brothers Gene and Lenny and Lenny's wife Lorraine. He became their lead guitarist and featured vocalist. The group quickly secured a contract with London Records in Montreal. Releases were credited to Vic, Gene & Lenny. Subsequent releases on Aragon were credited to Gene and Vic. Arnie got his chance with his own composition,BlueStreet (London 361).

The record, credited to Lenny Siebert, featured and credited Arnie as vocalist on Blue Street and as guitarist on the flip side „4-Homing. On the strength of the London deal, the group secured a weekly television show on the CBC affiliate, CBWT-TV (Winnipeg). Arnie was usually featured in his own spot every week as well as performing a section of the show with the group. In the summer of 1957 Arnie signed a solo contract with London and - backed by the Sons of the Saddle - cut two traditional songs. Wayfaring Stranger (London 17008) was a folk-country duet with Lorraine S iebert, while Arnie was paired with Nome and Esther Derksen on the gospel song, I n 114y Father' s !louse.

Derksen and the-Sons of the Saddle toured extensively throughout western Canada but remained based in Winnipeg, where Arnie lived with his wife and two children. Lenny Siebert had seen some success writing songs for Slim Whitman and it is possible that this success south of the border gave him a little clout when he went to see Jim Denny at Cedarwood. He secured a contract for Derksen with Denny Artists management, Cedarwood publishing and Decca Records.

The Decca contract produced four singles and two sides which remained unreleased until now. Arnie re-recorded Blue Street for Decca coupled with Lenny Siebert's Crazy Me. Let The Whole World Know was written by Memphis legend Quinton Claunch (who recorded such diverse artists as Charlie Feathers and James Carr and was then a partner in Hi Records) together with Walter 'You Made A Hit' Maynard who was pitching artists to Hi and later started his own Wal-May label with Feathers. Cedearwood stalwarts J ohn D. Loudermilk and Marijohn Wilkin submittedi d Like To Be Alone while Vic McAlpin chipped in with My Dancing Shoes. Country soul man Arthur Alexander wrote She Wanna Rock for Derksen and Mark 'Teen Angel' Dinning wrote/In With You. The issued cuts were rounded out by yet another Cedarwood copyright, the old Webb Pierce standard, There Stands The Glass. The Decca contract and the term with the Sieberts seem to end in 1959.

Derksen, who had studied classical guitar, took a sharp career turn and ended up on the Canadian Barry label in 1961 with theJohnny Lewis Trio. When The Sun Goes Down (Barry 3053) was a pop record with jazz overtones and Derksen takes a jazzy guitar solo. The flip side features a dreadful vocal from Millie Lewis complemented by background humming and guitar work from Derksen. It was a forgettable and out of character disc - and probably marks the inauspicious end of an otherwise promising career.
The last anyone in Canada saw of Arnie was in th had apparently married a Phi lippino girl and mov States. He is officially listed as Missing In Action country fraternity. 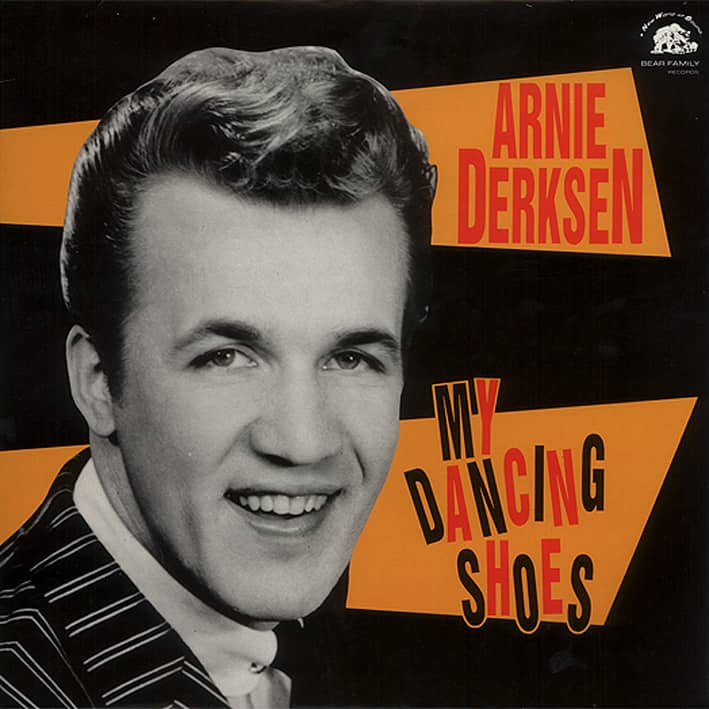 
This product will be released at 5 November 2021


This product will be released at 8 October 2021


This product will be released at 8 October 2021