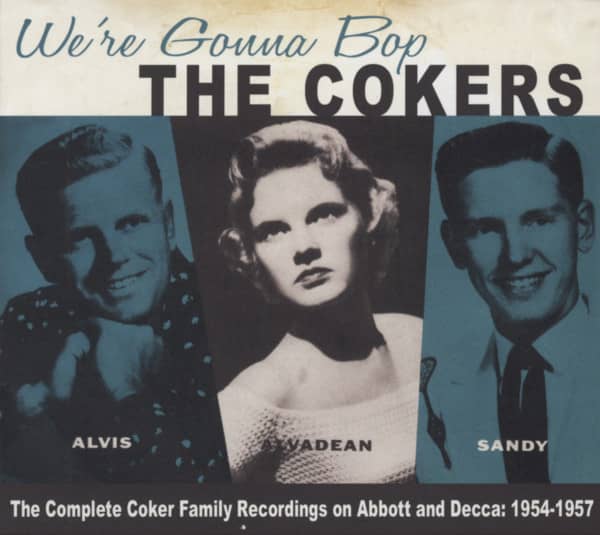 •    Rediscover the first family of West Coast country, bop, rockabilly, and pop!
•    Most tracks released on CD for the first time, including eight that have never been released on any format until now!
•    Detailed liner notes with in-depth biographical information culled from all-new interviews with the Cokers.
•    Massive, beautifully illustrated booklet packed with many never-seen photos of the family and their famous friends - from the Coker siblings' personal collections!

California's Coker Family is best remembered for two rockabilly classics of the 1950s: patriarch Alvis Coker's Don't Go Baby (Don't Go) and his daughter Alvadean's We're Gonna Bop. Both songs were written by Alvis' wife, Geraldine, who played bass in the family band. With son Sandy on guitar and fiddle, daughter Linda on piano, and youngest daughter Carolyn on vocals and percussion, the six members of the Coker Family were a popular staple of the rockabilly-infused West Coast country scene of the mid-1950s. Alvadean and Sandy were regular performers on the influential 'Town Hall Party,' and the Cokers – in various incarnations – recorded a total of 30 songs for both the Abbott label in Los Angeles and the Decca label in Nashville.

Ranging from hillbilly, to rockabilly, to early pop-country, the Coker recordings are a fascinating snapshot of an era of rapid changes in the world of popular music. Their revved-up collaborations with Jim Reeves, Floyd Cramer, Hank Garland and other legendary luminaries of country music are included in this collection, which gathers the family's complete studio output for the first time. You'll hear more than 25 songs that have never been released on CD. Of these, eight have not previously been released to the public on any format! As a bonus, you'll hear an alternate take of Alvadean's rockabilly classic, We’re Gonna Bop!

Nearly six decades later, the Coker Family's recordings still retain the energy and vibrancy that made them so appealing to live audiences in the mid-1950s. With detailed liner notes by Scott B. Bomar, in-depth biographical details about the Cokers based on several all-new interviews with the family, and a plethora of unseen photos from the Cokers' personal archives, this lovingly curated collection is a treasure trove of forgotten gems just waiting to be rediscovered by fans of 1950s rockabilly and country!

The Complete Coker Family Recordings on Abbott and Decca: 1954-1957 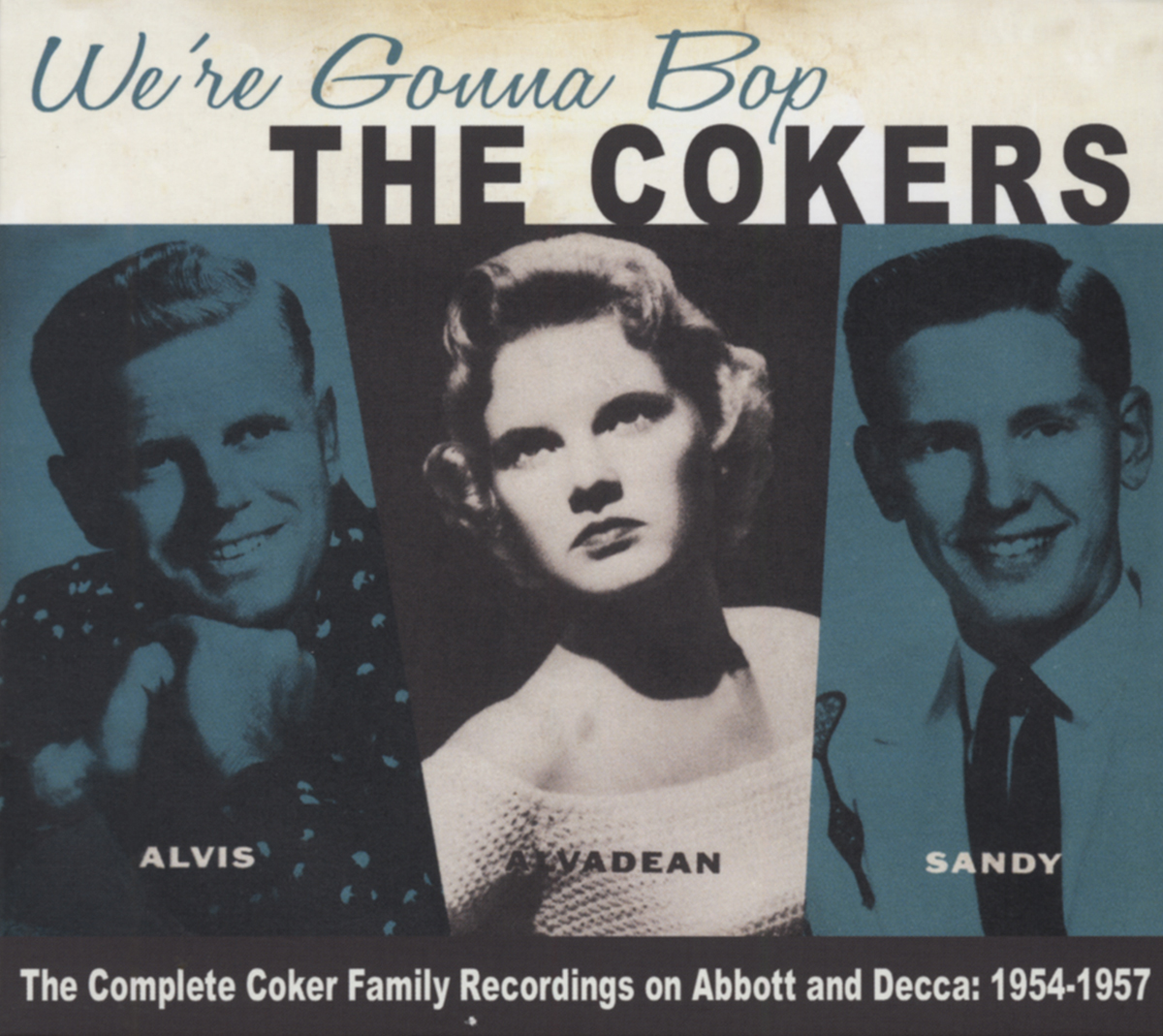 abor Robison glanced nervously at his wristwatch as he wheeled his black Cadillac into the parking lot of radio station KTRB in Modesto, California. "I don't know if we made it or not, Jim," he grimaced as he screeched into the first open parking space. "Well, let's go in and find out," Jim responded as he stretched his hand into the back seat to retrieve his white cowboy hat. It was Thursday, February 4, 1954, and Jim Reeves was to appear at the California Ballroom with 'Fat Boy' Bill Mitchell in just a few short hours. Robison, Reeves' Hollywood-based producer and record label boss, had arranged for Jim to stop by Chester Smith's daily KTRB radio show to publicize that evening's performance and promote I Love You, his current Abbott Records duet with Ginny Wright.

But they didn't make it in time. Reeves had been delayed by a longer-than-expected autograph session at a local record shop, and Chester was just about to sign off the air when the two walked in. Smith introduced Fabor to Alvis Coker, whose daily radio show with his Coker Family Band was up next on the broadcast schedule. With his wife Geraldine on upright bass, 14-year-old daughter Alvidine on vocals, and 12-year-old son Sandy on fiddle, the Cokers were a popular local group who played the country hits of the day. Robison explained the situation and asked Alvis if Reeves could appear on the Cokers' show since they'd missed their chance with Chester. The good-natured Coker patriarch, very familiar with Jim Reeves and his recent #1 hits, Mexican Joe and Bimbo, readily agreed.

Fabor and Jim took their place in the corner of the studio to await their chance to go on the air. When Al and his family kicked into their opening number to start the show, however, Robison immediately perked up. Afterward, he asked Mr. Coker if he could stop by the family's home later that evening to talk about their music career. It was precisely the break Al had been waiting for.

Alvis Coker was born April 8, 1918 in Conway, Arkansas. His parents, James and Maggie, owned a cotton farm with more than 200 acres. They had eleven children, and music was at the center of their deeply religious family life. "Arkansas is the Bible Belt," Alvis' oldest daughter Alvidine explained. "They all went to church every week, and they'd drive 100 miles to go to an all-night singing. All the kids played instruments, so they'd sit around playing music just for their own enjoyment together as a family." The Cokers learned shape note singing at the Stamps-Baxter music schools, which further honed their musical sensibilities and tight harmonies. "They all had the most beautiful singing voices you ever heard," Alvidine reflected.

When they weren't making music at church, Alvis' brothers played at barn dances and community gatherings around central Arkansas. They would often bring him along. Armed with a love for music and an eagerness for new adventures, Al finally headed for California in 1937. He was just 19-years-old when he settled in Bakersfield. Finding work as a farmhand, he began putting together bands for local performances. "My dad played anything with strings," Alvidine explained. "Guitar, fiddle, steel guitar. If it had strings on it, my daddy could play it." 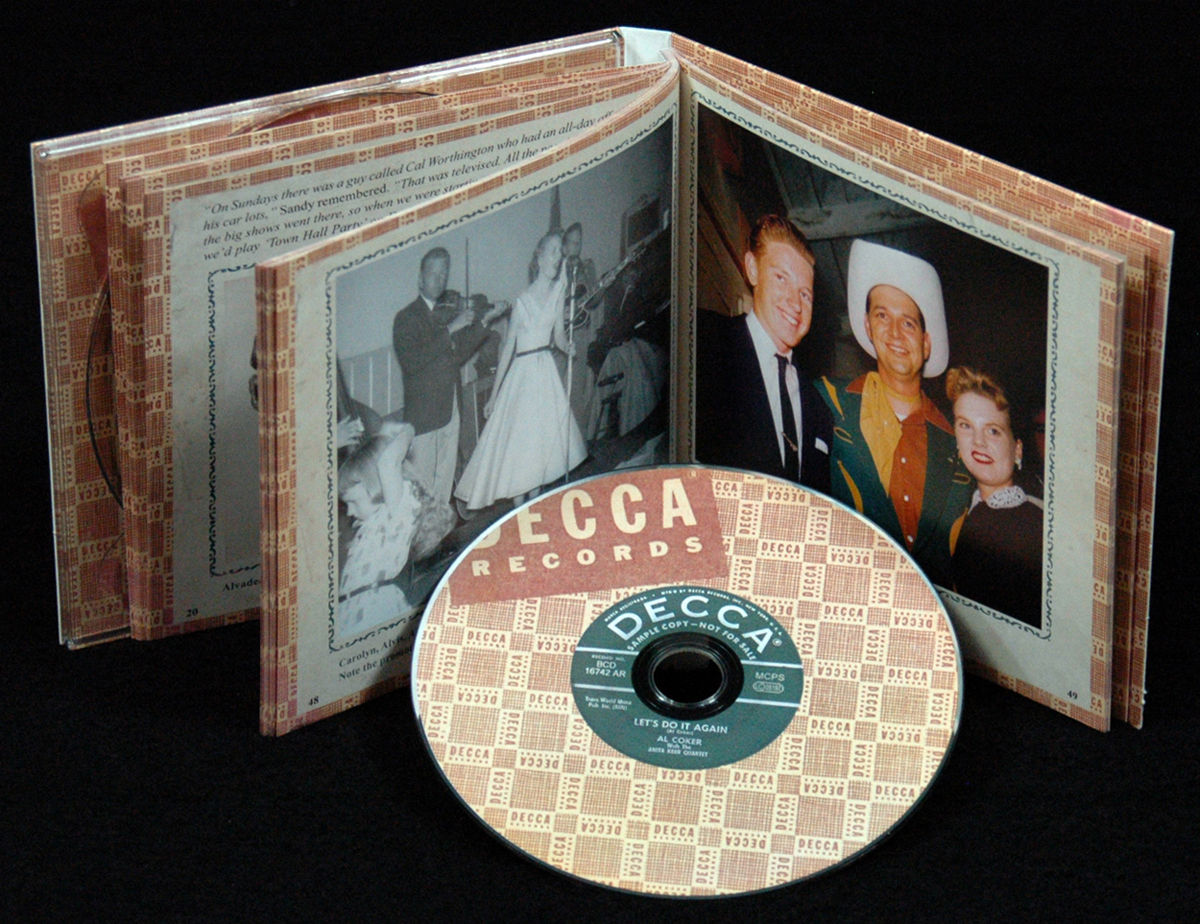 Not long after moving to Bakersfield, Alvis met Geraldine Lindley, a young beauty whose friends called her Gerry. Born June 21, 1922 in Pharaoh, Oklahoma, Gerry's father worked on wildcatting crews for the Gypsy Oil Company throughout Oklahoma Indian Territory. By the time she started the eighth grade she'd attended thirteen schools, and learned how to feel at home wherever her travels might take her. In 1937, those travels had taken her family to California.

A brief encounter changed Geraldine's life when she was pitching pennies at a Bakersfield carnival that summer. "I looked up and saw the most handsome man I had ever seen," she told ‘The Clovis Independent.' "It was night and he was across the other side playing the same game with his friends." A week later, Gerry and her cousin went to welcome some new neighbors who had moved in down the block. "To my surprise," she recalled, "one of the young men was the one I had seen at the carnival." He invited her to a dance in September of 1937. Alvis and Geraldine married in December. He was 19 and she was 15.

On October 25, 1938, Gerry gave birth to a daughter. They named her Alvidine, a combination of Alvis and Geraldine. "Oh, I hated my name all my life," Alvidine laughed. "People would always mispronounce it. They couldn't say it right, so I never did go by it. The family always called me Dina."

Al worked long hours as a farm laborer and continued to pursue music on the side. On October 12, 1940, Alvis Coker, Jr. was born in Bakersfield. The family called him Sandy. During World War II, the Cokers moved to Richmond in the San Francisco Bay area, where Alvis worked in the shipyards as a journeyman welder. Their third child, Linda, was born there on July 7, 1943. After the war, the Cokers settled in Lancaster, California. "My dad had alfalfa and he farmed," Alvidine explained, "but on Saturday nights they had dances there with my dad's band."

Soon after their fourth child Carolyn was born on June 14, 1946, Alvis gave up farming and moved the family to Modesto, where Geraldine's parents had already relocated. He bought a grocery store, but continued to play music in every free moment. "One time my mother caught Sandy in their room with Daddy's fiddle," Alvidine recalled, "and he was playing a little song. Well, she about fell over dead. He had to have been about 9 years old. When Daddy came in from work, she said, ‘I want you to come listen to this.' My dad just went berserk and, from there, he taught my brother everything he knew on the fiddle."

"He'd sit around when he wasn't working in the grocery store and get a fiddle out and show me how to play things," Sandy recalled of his father. "I have this gift that he had where anything that you hear you can duplicate it. You're quick to learn. I call it a gift. Not everybody can do this. I learned very quickly."

On July 4, 1951, both Alvis and Sandy entered the old time fiddling contest in Modesto. Sandy was just three days shy of his eleventh birthday. "I won first prize," he laughed. "My dad came in second. He always ribbed me about that. He knew he had something in me with my ability to play the fiddle like a grown up."