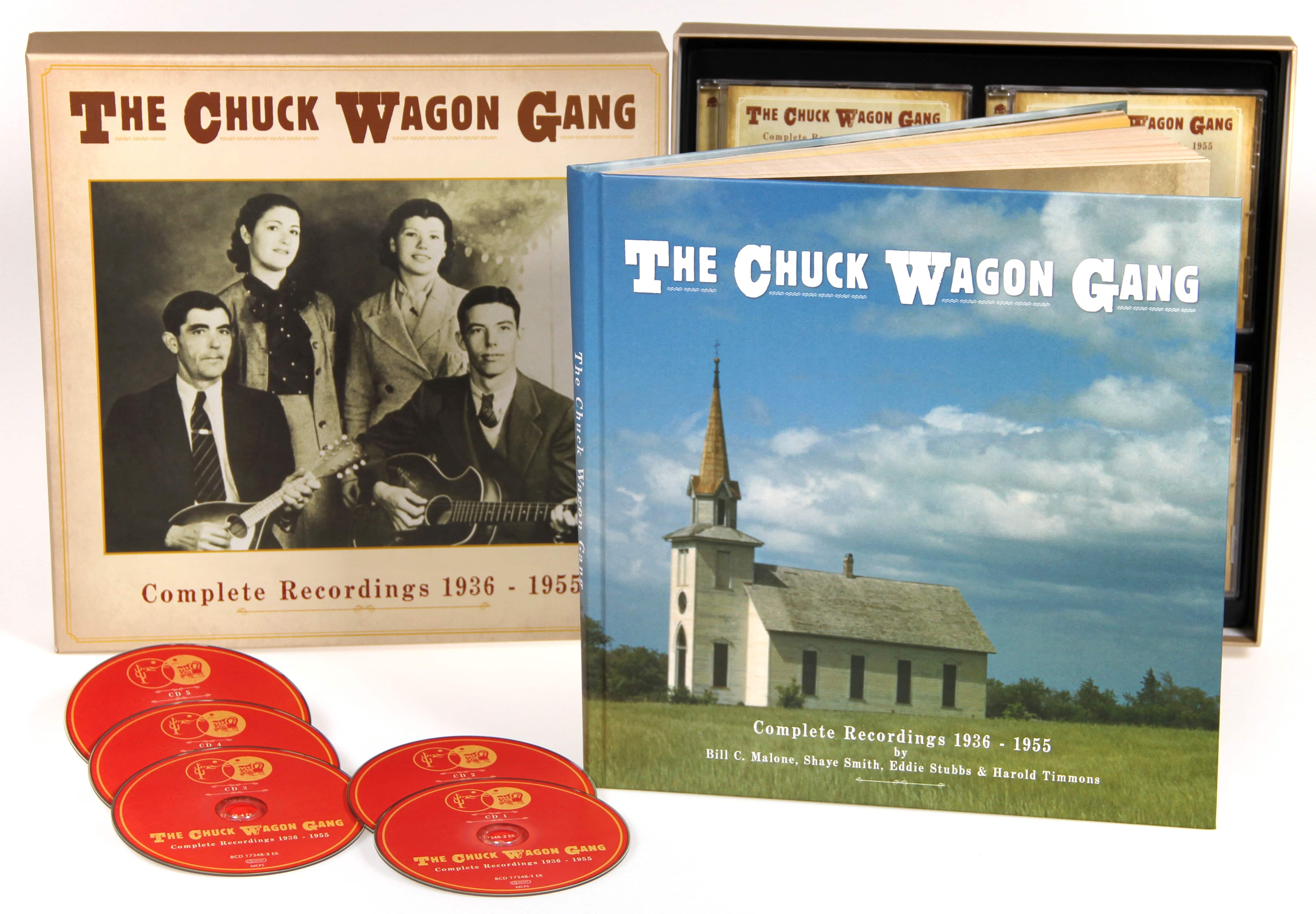 At the dawn of the 1930s God spoke and called forth from the Texas dust a sound…a sound that will forever be known as that of the Chuck Wagon Gang.

David Parker 'Dad' Carter, Rose, Anna, Ruth Ellen, Anne, and Bettye along with brothers Jim, Roy, and Eddie–as well as a host of vocalists and musicians over the next several decades–would create a profound body of work with timeless appeal. Heaven only knows how many hearts have been touched by the music of the Chuck Wagon Gang.

Much like the Carter Family (no relation) of the Appalachian Mountains of Virginia who were present at the establishment of the country music industry, the Carter family of Texas was called upon to help lay the cornerstone of American gospel music. In the simplest yet most elegant of musical terms, armed with only a guitar and a song, the Chuck Wagon Gang sang the American public out of the Great Depression, through wars, assassinations, revolutions, flag burnings, scandals of church and state, numerous Presidents and a revolving door of changing times. Then as now, their music serves as a guiding light beckoning from a peaceful distant shore. Their message bears truth yet condemns no one. The lyrics of the Chuck Wagon Gang do, however, prompt the same question asked by the old union labor song Which Side Are You On? It's up to the listener to decide.

If the Chuck Wagon Gang had done nothing except record the original version of Albert E. Brumley's I'll Fly Away, their legacy as American gospel greats would've been secure. The song is now so globally known, and has been interpreted in so many ways that it is often crushed by the weight of its own fame. But upon hearing the original recording one is reminded of its beauty and offered a glimpse into the majesty of heaven: song, songwriter and messengers in perfect union. At face value, the recording appears to be just good country singing of a familiar old song. However, the further down into the grooves you go, layer upon layer of greatness unfolds. The tones and nuances inside of that country singing are other-worldly, mysterious, vast in scope. If you look deep enough you can almost see the anointed power sent forth which propelled I'll Fly Away into the ages.

The beauty of the Chuck Wagon Gang was how humble in spirit they were in the midst of the matter. The group simply showed up at a recording appointment, tuned the guitar, warmed up, hit the famous chord, gathered around the microphone and sang a song they believed in. I'd be willing to bet the farm that on the way home from the session no one said, "That Fly Away song we did today is going to be the one that is going to set the world on fire." The song chose them.

One of the listeners the Chuck Wagon Gang touched with that song was an Arlington, Mississippi cotton farmer named Elry Lee Johnson. He was my grandpa. I was in his presence the first time I heard the group sing. It was around the noon hour on some weekday in the mid 1960s. Pa had come into the house to eat lunch after working in the field all morning. After lunch he tuned into Philadelphia, Mississippi's WHOC radio station to listen to their noontime gospel broadcast before going back to his work. I've never forgotten the look on his face as he sat with his eyes closed in his favorite chair, wearing his dusty work clothes and brogan shoes, listening to the Chuck Wagon Gang sing. While the song played, he patted his foot just enough that I could hear the nail heads on his leather soles lightly keep time on the linoleum floor. The look on his face could only be described as a perfect portrait of peace and contentment. When it was over, he stood up and said, "That's mighty good", put on his hat and went back to work. It was mighty good. Good enough after one listen to become a part of me for a lifetime. That's the effect the Chuck Wagon Gang and their music have had on people since the very beginning.

I wish that I could have been present when Dad Carter gathered his children to sing songs on the porch at the end of the day for their fellow migrant farmers and their families. I can only imagine how beautiful those harmonies must have sounded as the sun was setting into the west. The words and music were surely a healing balm for a weary people. Nothing's changed. Now, well into the twenty-first century, David Parker Carter's descendants are still serving in the same way the patriarch of the family designed many years ago. At the close of day we can still gather around the Chuck Wagon Gang and have the privilege of hearing them sing heaven's songs of peace, hope and promise to all of us migrants living in this loud, clattering world below.

Filter
No results were found for the filter!
CHUCK WAGON GANG: Meeting In Heaven Art-Nr.: CDNH728109