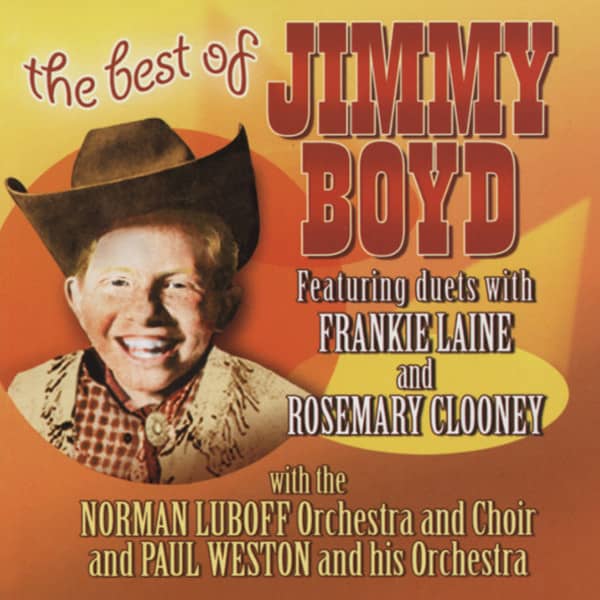 Please inform me as soon as the product is available again.
$20.61 *

Learn more about Jimmy Boyd
Jimmy Boyd What do Jimmy Boyd and Bo Diddley have in common? Well, they were both born in... more
Close menu
"Jimmy Boyd"

What do Jimmy Boyd and Bo Diddley have in common? Well, they were both born in McComb, Mississippi, and both left when they were young. Jimmy was born on January 9, 1940 (though some more recent...and perhaps reliable...sources say 1939). Jimmy's father, Leslie, put his wife, Winnie, their two sons, Kenneth (then four years old), and Jimmy (aged two), on a train to Riverside, California. He'd sold everything he owned but still only had enough money to send his wife and kids, so he rode the rails out west. Leslie got a job cleaning up construction sites, and often took the kids to a hillbilly dancehall near Riverside. One night, Jimmy's brother, Kenneth, went up to the bandstand and told the bandleader, Texas Jim Lewis, that he should hear his little brother sing and play. Lewis called Jimmy up on stage, and, by Jimmy's account, he went over well. Texas Jim and the manager of a local radio station asked Leslie and Winnie if Jimmy would sing every Saturday night on the hour-long radio show they planned to broadcast from the dancehall. A little later, Leslie developed cataracts in both eyes and scheduled surgery in Los Angeles. While there, he heard about auditions for the Al Jarvis Talent Show on KLAC-TV. Jimmy won the contest, and the next day KLAC was deluged with telegrams asking for more Jimmy Boyd. Television and radio followed, as did a Columbia Records contract, and then came I Saw Mommy Kissing Santa Claus, which has reportedly sold more than sixty million records since Christmas 1952. Jimmy appeared on The Ed Sullivan Show five times, and recorded with Rosemary Clooney and Frankie Laine. By 1956, Columbia was running out of ideas of what to do with their former pre-teen star. Rockin' Down The Mississippi adapts a few lines from Daniel Decatur Emmett's Dixie and a few more from W. C. Handy's St. Louis Blues, but it would be a pretty lame record if not for Joe Maphis on guitar (a few months earlier, the writers had placed another of their songs, Slip, Slip, Slippin' In, with Lou Millet and Eddie Bond). The other side, Mixed Up Blues, was a cover version of Johnny Taylor's Mixed Up Rhythm & Blues. Taylor's original had appeared on the Bakersfield-based Fire Records three months before Jimmy's session.

Boyd went on to appear in a plethora of movies from the sublime ('Inherit The Wind') to the ridiculous (Conway Twitty's 'Platinum High School'). He was in a large number of TV series, including 'The Electric Company', 'Batman', 'My Three Sons', and most recently a 1993 episode of 'Law And Order'. He also made many more records, despite what can only charitably be called a barren patch after Santa Claus. After Columbia, he was on Jubilee, MGM, Dot, Capitol, VJ, Imperial, and Chelsea. Interesting fact: In 1965, he covered That's What'll I Give To You for VJ. The producer was Doris Day's son, Terry Melcher, who was also producing Wayne Newton. Melcher had found an unknown Australian group, and he pitched one of their songs to Newton and another to Boyd, thereby making them the first American artists to record Bee Gees' songs. At last sighting, Jimmy was an auto dealer in Redondo Beach, California, retailing high-end European automobiles.