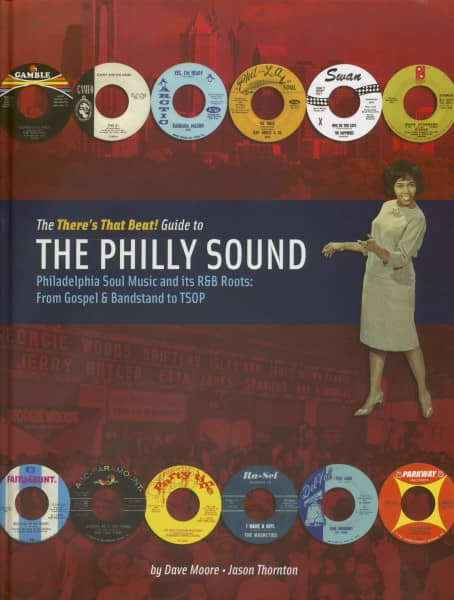 Various: The There's That Beat! Guide To The Philly Sound: Philadelphia Soul Music and its R&B Roots - From Gospel & Bandstand to TSOP

THE PHILLY SOUND – Philadelphia Soul Music and its R&B Roots: From Gospel & Bandstand to TSOP
by Dave Moore & Jason Thornton

How Philly became the Epicenter of Black Music!

The passionate team behind the highly acclaimed Northern Soul magazine There’s That Beat!, presents here in over 690 lavishly designed pages, their in-depth investigation of how Philadelphia became the hottest city in the American pop music industry, not only once, but twice!

This meticulously researched book tells the remarkable story of the music entrepreneurs, record labels, recording studios all of which contributed to what became known to the world as The Philly Sound, all beautifully presented in full, sumptuous, coloured detail including a multitude of rare Soul/R&B discs and loads of vintage photographs and memorabilia.

A quality point of reference and a magnificent book for any serious Soul music fanatics as well as a must for every true Northern Soul record collector!

PREFACE
For fans of A myriad of ima Records, to th will reminisce city's musical enough to tak the dominatio twist of Chub american music, when the words Philadelphia and music are used in the same sentence it conjures up a ages. To the passing soul fan it creates pictures of the famous green label of Philadelphia International he doo wop aficionado it brings back memories of the city's street corner quartets whilst Rock n Rollers about the pre Beatle days. In the case of Philadelphia — The City Of Brotherly Love, the history of the legacy stretches much further back than any of these specific genres and hopefully creates a pot big e ingredients from all those musical legacies and turn them into a recipe for a soulful stew. Long before n of Gamble and Huff, long before the emergence of Dick Clark's Bandstand and even long before the by Checker the city had laid its musical foundations on solid ground.

Much has be musical figure works. And o Philly could E early gospel o America's tee pumping after of this particu Many people of 20th Centu large dose of hint of authen oven that was the whole of during these e rights back in I have taken t musical journ would seem to developments via live shows  written about Philadelphia and its musical development. The famous names of the city's historical .s, reads like a who's who of radio, record labels and all the associated people who create the recorded f course, woven into that musical tapestry is the contribution of the different styles of black music. !yen have a legitimate claim to having produced the first real `pop star' in Mario Lanza! From the outpourings of The Ward Singers, through the early days of Cameo-Parkway, which coincided with riage awakening, and into the chart success of Gamble and Huff, black music has provided an ever y to the city's musical heartbeat throughout its history in the 20th Century, and beyond. It is a branch lar black music contribution that is the concern of this book. Soul music.
have set out to define soul music.

There are certainly legitimate claims that it is a hybrid of the styles Ty black music that came about as a result of a blend of different styles of African — American input. A gospel, flavoured by a smattering of rhythm and blues, seasoned by a pinch of jazz and topped with a tic rock n roll would seem a good recipe for a perfect soul cake. And in the 1960s it was baked in the the emerging 45 rpm vinyl record format as it fed a ravenous family of music hungry teenagers across America and even beyond its own shores. But we should also note that the music that was created ras came against a backdrop of the struggle for equality that Americans had dictated were their lawful 1776 but were, for a whole swathe of its citizens, even as late as the 1960s, just a pipedream. Therefore he liberty of recording some non musical events that I felt were pertinent to the story of Philadelphia's ,37. To simply tell a story diarizing record labels, recorded songs and the people who created them me to be only relaying half the tale.

The other half is the time, the era, the locations, the technological the social tapestry of people's lives and how music became an escape from the hum drum of daily life radio and of course the 45 rpm vinyl platter.  In amongst th and Jamie/Gu city enjoyed, h 4 drum beat s melodies. Muc apartments an away in UK. would never O'Jays, Bunn known as Rar the lesser knoN had been discs is this music, the world famous names of MFSB, Sigma Sound, Cameo-Parkway, Frank Virtue, Frankford Wayne yden etc lay a wealth of talented people that created an almost parallel world to the great success the both on its airwaves and in its record stores.

A style of soul that was primarily upbeat, based on a 4 x o exploited by Detroit's Motown, with lilting pianos, swirling string arrangements and vibes on the .h of this soulful output would lay dormant in vaults, record distributors warehouses, record producers d Mom and Pop record stores until rediscovered by a record collecting fan-base almost 3.500 miles The names of Larry Clinton, The Tranells, The Rotations, The Four Larks, The Four Perfections, enjoy the limelight that other more commercially successful chart-bound acts like Three Degrees, y Sigler and Barbara Mason would. They would however help to create a worldwide phenomenon e northern soul that would lead to a legion of fans making the cross Atlantic trek to find records by vn lights of America's soul.

This in turn would lead to fans in the US also rediscovering the music that Lrded, sometimes decades earlier, and bred a new generation of US based record hunting soul fans. It he people who created it and the companies that produced it that provide the heartbeat of this book.

Article properties: Various: The There's That Beat! Guide To The Philly Sound: Philadelphia Soul Music and its R&B Roots - From Gospel & Bandstand to TSOP

Review 0
Read, write and discuss reviews... more
Close menu
Customer evaluation for "The There's That Beat! Guide To The Philly Sound: Philadelphia Soul Music and its R&B Roots - From Gospel & Bandstand to TSOP"
Write an evaluation
Evaluations will be activated after verification.
Weitere Artikel von Various
Thank You For The Days ...: Thank You For The Days - The 60s Picture Book Art-Nr.: BFB10017