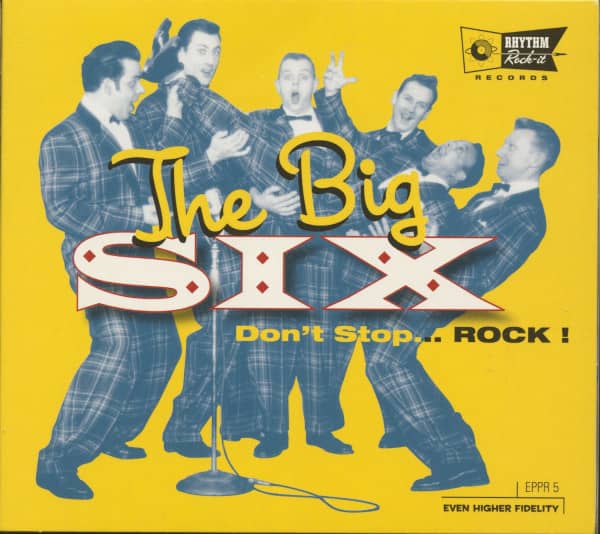 (Rhythm Rock It Records) 25 tracks - Yessir! The long awaited 'Best Of ..' compilation of The Big Six! All songs were recorded between 1995 and 1999 and were re-mastered in 2019! The CD also includes great notes by the Big Six founder and drummer Ricky Lee Brawn - A real blast all the way!

The (Bobby Patrick) Big Six came from Glasgow. Back in May 1962 they played at the Top Ten Club on the Reeperbahn.

Pete McCrory (guitar): "We had our own singer at that time, Barry St. John. She was very good, but unfortunately never made it big."

After that first Hamburg gig, the band moved on to Hanau, where they performed for four weeks near an American barracks.

McCrory: "We were very well received by the Yanks, because we were already playing a lot of soul music at that time. That got us contacts and we stayed in the area for about half a year, performing in the officers' clubs and stuff. Then we went back to London, where our base was. There we met Emile Ford (who had already made a successful guest appearance in Hamburg with the Checkmates) and toured with him first through England, then through Sweden and finally ended up back in Hamburg. Emile soon left, but we stayed for eight months."

Like the Star Club bands King Size Taylor And The Dominoes and Cliff Bennett And The Rebel Rousers, which were very similar to them in terms of lineup and also style, the Big Six enjoyed a high reputation among colleagues. However, the great success with the public failed to materialize. Perhaps because the image of these bands was simply too adult, not teenager-friendly enough to appeal to the masses, who were mainly into Beatles-style guitar bands anyway.

McCrory: "Even in Scotland and England on the U.S. bases, we played soul, because we always got the records. But what people wanted to hear was the Chuck Berry stuff. In Hamburg, in the Star Club, that was a special audience, you didn't get that elsewhere. We weren't that popular elsewhere, either."

In 1963, the Bobby Patrick Big Six began making records for Ariola. Soon after, they teamed up with Tony Sheridan.

McCrory: "How we got Tony, I don't really remember. We played alone at first. With Barry. Then Tony broke his finger and couldn't play. That's when it started: We did the first half hour alone, then the second half hour with Tony. Soon Barry went her own ways and we stayed with Tony."

Producer Paul Murphy, who had taken over Tony Sheridan from Bert Kaempfert, had a thing for the group: "With Tony and the Big Six, I produced 'the good version' of 'Skinny Minnie.'"

Murphy also produced the first-rate 'Just A Little Bit' album with Sheridan and the Big Six, among others. His superiors, however, could do quite little with his ideas: "The fact that Polydor failed to market the material I created appropriately is still a bitter pill for me today. It didn't cost them a penny. An album maybe DM 1,500 !!!"

Tony Sheridan confirms this assessment: "With the Big Six we had great opportunities, but unfortunately they were not recognized."

Sheridan: "We were supposed to open for Chuck Berry at the Olympia in Paris. On the way there, we got stuck in Oppenheim on the Rhine to test wine and buy if necessary. The Big Six were Scottish and therefore animal drunks. We filled up on wine and drove our station wagon without heat through the cold to Paris. When we got there, we were as full as a thousand men. We went to a restaurant to eat. The waiter explained that it was not the right time. We were welcome to have a drink, but there was nothing to eat. We were quite insolent and became massive. Then the cook came out of the kitchen with a hatchet and chased us out. The police were waiting for us outside. We all had to go to the police station. The next evening we performed at Olympia. After we played a piece, the curtain went 'down' because some of the Big Six couldn't stand."

McCrory: "That we were completely drunk at Olympia is correct. We stayed in France with Sheridan for a couple of months. Sometimes we'd split up for a while."

Occasionally, the Big Six would then go back to England, where they also worked as backing bands for notable American artists.

McCrory: "We performed with Roy Orbison and Bill Haley, we even played the Royal Albert Hall, but we didn't get off the ground in London. The other bands, they liked us, but the people didn't, because soul didn't become modern until much later. Besides, we always had to do on the continent... We came back from France with Tony and immediately had a mucke in Baden-Baden. A manager from Düsseldorf brought us personally to the club. We set up, were surprised that only the staff was there, but started on time. When we had played for half an hour, the right band came and asked, "What are you doing here? We were in the wrong club. We never found the right one."

These anecdotes describe the situation at that time very vividly, since professionalism was not yet that high. Tight organization and discipline actually only existed under the direction of Manfred Weissleder in the Star Club. There, on the one hand, the musicians had their pay slashed for being drunk or late, but on the other hand, they were constantly busy and found themselves in the security of the large St. Pauli family, which offered many of them a home for years.

So it was common that when an English band broke up or went back to their homeland, one or the other musician always stayed in Hamburg because he was in love, engaged or married there or had joined a band that continued to work there. When the Big Six broke up for a short time in 1964 after the departure of Archie Leggatt and Bobby Patrick, who until then had been not only singer and trumpet player but also manager of the band, and then reformed, their drummer Frederick 'Freddy' Smith joined the German Tonics.

Helmut Franke (then guitarist of the Tonics): "John Wiggins also played organ on a cover version once. Pete McCrory was a very good guitarist. He had a very fluid, jazzy style. That was great. He played a white Gibson 175."

Pete McCrory: "My 175 Gibson was stolen in London. Of course, nothing was insured. We had just joined Jerry Lee Lewis at the Saturday Club, packed our stuff in the car and sat down in the canteen first. When we came out, the car was gone. In the evening we had a concert with Brenda Lee. So we had to pump instruments first. It wasn't so easy with the borrowed instruments."

It wasn't to be easy for the new Big Six, who soon reappeared in Hamburg, either. Despite the recognition they received from colleagues and despite the numerous records, under their own names or pseudonyms, success with the general public failed to materialize. The situation in the star clubs began to change.

Dieter Horns, bass player of the German Bonds: "If Lee Curtis hadn't played 600 times in the Star Club and Tony Sheridan hadn't played 700 times, as good as he is, then boredom wouldn't have arisen. I remember that from my own experience. You'd go in at five in the morning and see who was there, and then there was Sheridan, who you'd already seen 700 times, so you'd rather go home. I'm sure this effect was also felt by the other people, even the normal fans. The excitement just wasn't there like it was in the early days."

The Big Six felt that, too. They continued to suffer from their old repertoire and image problems, and their records didn't get the proper recognition either. In the meantime, under the direction of Jimmy Bowien, who had taken over from Murphy, they also made recordings under their own name again without Tony Sheridan, because they could boast an excellent singer in Ian Campbell. When frustration got the better of them, some band members wanted to return to London, some did not.

Pete McCrory: "I wouldn't have quit if the band had stayed in Hamburg, because I was married here and already had a child. I had never had it so good as here in Hamburg, so why should I leave again ? In London I cleaned windows and scrubbed floors. There were so many bands, and, as I said, our music wasn't really in demand. We were in London for weeks without any jobs. We had already slept on park benches, at the Marble Arch, there was a Wimpy Bar, we sat there for whole nights with a cup of tea."

So Pete stayed in Hamburg, working as an engineer.

Freddy Smith joined Ian And The Zodiacs. In 1972-1974 he played, again with Archie Leggatt, who had been in Johnny Hallyday's band, for Kevin Ayers.

John Wiggins initially stayed with Tony Sheridan before becoming a member of the Paul Williams set in London in 1968. He now runs, with his wife Sylvia Saunders (ex-drummer of the Liverbirds), a sing-along club in Spain.

Alex Young went for a while to the Original X-Rays, a Hamburg formation. In 1969 he founded the group Grapefruit in England, where he was a bassist and singer. Later he became a music publisher and took care of the interests of AC/DC and Flash And The Pan in Europe.

Ian Campbell became a studio musician (for Stealers Wheel, among others).

Bobby Patrick stayed in Hamburg for a while in 1996 to assess the chances for an oldies band, and now lives near London.

Nothing is known about the whereabouts of Peter R. Carter.

Bobby Patrick: "I formed the band in 1960 with a different line-up, and it changed a few more times before we went to Hamburg after 1962. That was then besides me, John Wiggins, Freddy Smith, Pete McCrory, Alex Young, Archie Leggatt and Barry St. John. I saw a movie, 'Pete Kelly's Blues,' which featured a group called Pete Kelly's Big Seven. Borrowing from that band, I named our formation Bobby Patrick Big Six. That's how the name came about. After three years in the Top Ten and the Star Club, I wanted to go home. Archie Leggatt had a wife and children in England, just like me. The other musicians had their wives or girlfriends in Hamburg. When we went home for Christmas 1965, Archie and I never came back. In addition, our relationship with Manfred Weissleder had reached rock bottom.

When we started at the Star Club, Tony Sheridan was accompanied by the house band that Manfred had put together. They were the Beat Brothers. The piano player was Roy Young, and the saxophone was played by Rikki Barnes. Manfred then asked if we wanted to accompany Tony, so it came about that we played with Tony. Archie later played with Johnny Hallyday in France, and also with J.J. Cale and Gary Moore. Barry St. John made some solo albums and became one of the most sought-after background singers in the London studios. I also went to London and started a career as a session musician. I toured with Stevie Wonder and Tina Turner, among many others."