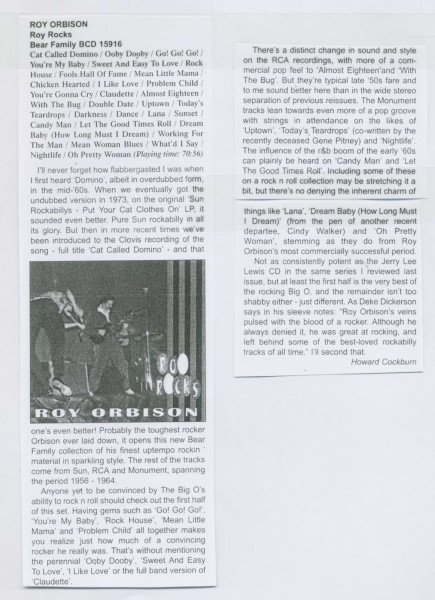 I'll never forget how flabbergasted I was when I first heard 'Domino', albeit in overdubbed form, in the mid-'60s. When we eventually got the undubbed version in 1973, on the original 'Sun Rockabillys - Put Your Cat Clothes On LP, it sounded even better. Pure Sun rockabilly in alt its glory. But then in more recent times we've been introduced to the Clovis recording of the song - full title 'Cat Called Domino' - and that one's even better! Probably the toughest rocker Orbison ever laid down, it opens this new Bear Family collection of his finest uptempo rockin material in sparkling style. The rest of the tracks come from Sun. RCA and Monument, spanning the period 1956 - 1964. Anyone yet to be convinced by The Big O's ability to rock n roll should check out the first half of this set. Having gems such as 'Go! Go! Go!', 'You're My Baby', 'Rock House', 'Mean Little Mama' and 'Problem Child' all together makes you realize just how much of a convincing rocker he really was. That's without mentioning the perennial 'Ooby Dooby', 'Sweet And Easy To Love', 'I Like Love' or the full band version of 'Claudette'.

There's a distinct change in sound and style on the RCA recordings, with more of a com-mercial pop feel to 'Almost Eighteen'and 'With The Bug'. But they're typical late '50s fare and to me sound better here than in the wide stereo separation of previous reissues. The Monument tracks lean towards even more of a pop groove with strings in attendance on the likes of 'Uptown', 'Today's. Teardrops' (co-written by the recently deceased Gene Pitney) and 'Nightlife'. The influence of the r&b boom of the early '60s can plainly be heard on 'Candy Man' and 'Let The Good Times Roll'. Including some of these on a rock n roll collection may be stretching it a bit, but there's no denying the inherent charm of things like 'Lana'. 'Dream Baby (How Long Must I Dreamy (from the pen of another recent departee, Cindy Walker) and 'Oh Pretty Woman', stemming as they do from Roy Orbison's most commercially successful period.

Not as consistently potent as the Jerry Lee Lewis CD in the same series I reviewed last issue, but at least the first half is the very best of the rocking Big 0, and the remainder isn't too shabby either - just different. As Deke Dickerson says in his sleeve notes: "Roy Orbison's veins pulsed with the biood of a rocker. Although he always denied it, he was great at rocking, and left behind some of the best-loved rockabilly tracks of all time." I'll second that. Howard Cockburn