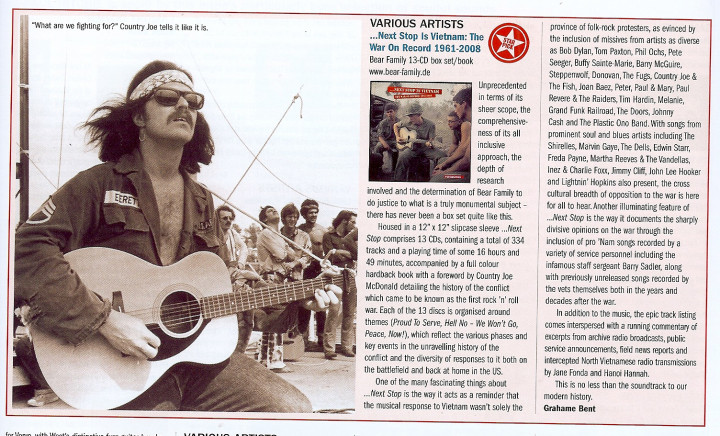 "What are we fighting for?" Country Joe tells it like it is.
VARIOUS ARTISTS ...Next Stop Is Vietnam: The War On Record 1961-2008 Bear Family 13-CD box set/book www.bear-family.de
Unprecedented in terms of its sheer scope, the comprehensive-ness of its all inclusive approach, the depth of research involved and the determination of Bear Family to do justice to what is a truly monumental subject -there has never been a box set quite like this. Housed in a 12" x 12" slipcase sleeve ...Next Stop comprises 13 CDs, containing a total of 334 tracks and a playing time of some 16 hours and 49 minutes, accompanied by a full colour hardback book with a foreword by Country Joe McDonald detailing the history of the conflict which came to be known as the first rock 'n' roll war. Each of the 13 discs is organised around themes (Proud To Serve, Hell No - We Won't Go, Peace, Now!), which reflect the various phases and key events in the unravelling history of the conflict and the diversity of responses to it both on the battlefield and back at home in the US.

One of the many fascinating things about ...Next Stop is the way it acts as a reminder that the musical response to Vietnam wasn't solely the province of folk-rock protesters, as evinced by the inclusion of missives from artists as diverse as Bob Dylan, Tom Paxton, Phil Ochs, Pete Seeger, Buffy Sainte-Marie, Barry McGuire, Steppenwolf, Donovan, The Fugs, Country Joe & The Fish, Joan Baez, Peter, Paul & Mary, Paul Revere &The Raiders,Tim Hardin, Melanie, Grand Funk Railroad, The Doors, Johnny Cash and The Plastic Ono Band. With songs from prominent soul and blues artists including The Shirelles, Marvin Gaye, The Dells, Edwin Starr, Freda Payne, Martha Reeves & The Vandellas, Inez & Charlie Foxx, Jimmy Cliff, John Lee Hooker and Lightnin' Hopkins also present, the cross cultural breadth of opposition to the war is here for all to hear.

Another illuminating feature of ...Next Stop is the way it documents the sharply divisive opinions on the war through the inclusion of pro 'Nam songs recorded by a variety of service personnel including the infamous staff sergeant Barry Sadler, along with previously unreleased songs recorded by the vets themselves both in the years and decades after the war. In addition to the music, the epic track listing comes interspersed with a running commentary of excerpts from archive radio broadcasts, public service announcements, field news reports and intercepted North Vietnamese radio transmissions by Jane Fonda and Hanoi Hannah. This is no less than the soundtrack to our modern history.