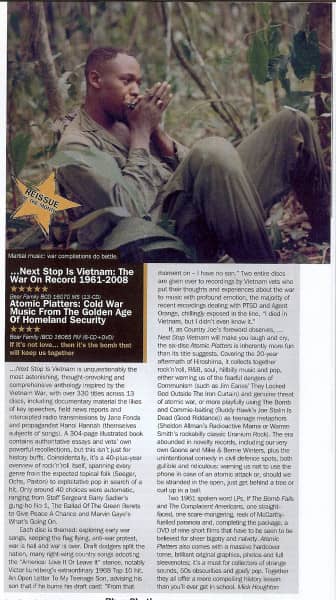 Martial music: war compilations do battle.
...Next Stop Is Vietnam: The War On Record 1961-2008 ***** Bear Family BCD 16070 MS (13-CD) Atomic Platters: Cold War Music From The Golden Age Of Homeland Security **** Bear Family /BCD 16065 FM (6-CD+DVD) if it's not love— thee it's the bomb that will keep us together
...Next Stop Is Vietnam is unquestionably the most astonishing, thought-provoking and comprehensive anthology inspired by the Vietnam War, with over 330 titles across 13 discs, including documentary material the likes of key speeches, field news reports and intercepted radio transmissions by Jane Fonda and propagandist Hanoi Hannah (themselves subjects of songs). A 304-page illustrated book contains authoritative essays and vets' own powerful recollections, but this isn't just for history buffs.

Coincidentally, it's a 40-plus-year overview of rock'n'roll itself, spanning every genre from the expected topical folk (Seeger, Ochs, Paxton) to exploitative pop in search of a hit. Only around 40 choices were automatic, ranging from Staff Sergeant Barry Sadler's gung-ho No 1, The Ballad Of The Green Berets to Give Peace A Chance and Marvin Gaye's What's Going On. Each disc is themed: exploring early war songs, keeping the flag flying, anti-war protest, war is hell and war is over. Draft dodgers split the nation, many right-wing country songs adopting the "America: Love It Or Leave It" stance, notably Victor Lundberg's extraordinary 1968 Top 10 hit, An Open Letter To My Teenage Son, advising his son that if he burns his draft card: "From that moment on - I have no son."

Two entire discs are given over to recordings by Vietnam vets who put their thoughts and experiences about the war to music with profound emotion, the majority of recent recordings dealing with PTSD and Agent Orange, chillingly exposed in the line, "I died in Vietnam, but I didn't even know it." If, as Country Joe's foreword observes, ... Next Stop Vietnam will make you laugh and cry, the six-disc Atomic Platters is inherently more fun than its title suggests. Covering the 20-year aftermath of Hiroshima, it collects together rock'n'roll, R&B, soul, hillbilly music and pop, either warning us of the fearful dangers of Communism (such as Jim Eanes' They Locked God Outside The Iron Curtain) and genuine threat of atomic war, or more playfully using The Bomb and Commie-baiting (Buddy Hawk's Joe Stalin Is Dead (Good Riddance)) as teenage metaphors (Sheldon Allman's Radioactive Mama or Warren Smith's rockabilly classic Uranium Rock). The era abounded in novelty records, including our very own Goons and Mike & Bemie Winters, plus the unintentional comedy in civil defence spots, both gullible and ridiculous: warning us not to use the phone in case of an atomic attack or, should we be stranded in the open, just get behind a tree or curl up in a ball.

Two 1961 spoken word LPs, If The Bomb Falls and The Complacent Americans, one straight-faced, one scare-mongering, reek of McCarthy-fuelled paranoia and, completing the package, a DVD of nine short films that have to be seen to be believed for sheer bigotry and naivety. Atomic Platters also comes with a massive hardcover tome, brilliant original graphics, photos and full sleevenotes; it's a must for collectors of strange sounds, 50s obscurities and goofy pop. Together they all offer a more compelling history lesson than you'll ever get in school. Mick Houghton