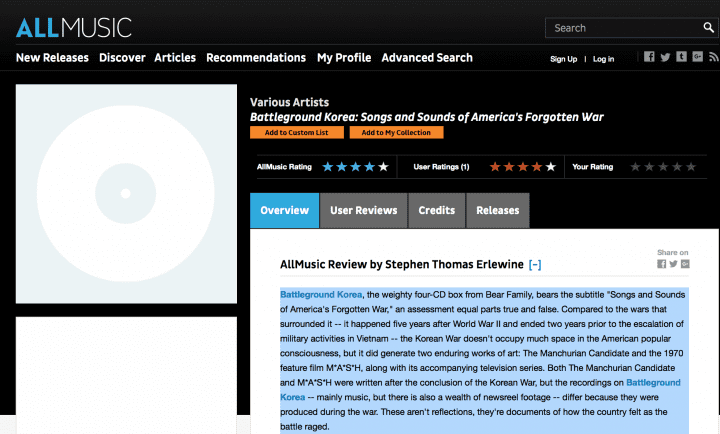 Battleground Korea, the weighty four-CD box from Bear Family, bears the subtitle "Songs and Sounds of America's Forgotten War," an assessment equal parts true and false. Compared to the wars that surrounded it -- it happened five years after World War II and ended two years prior to the escalation of military activities in Vietnam -- the Korean War doesn't occupy much space in the American popular consciousness, but it did generate two enduring works of art: The Manchurian Candidate and the 1970 feature film M*A*S*H, along with its accompanying television series. Both The Manchurian Candidate and M*A*S*H were written after the conclusion of the Korean War, but the recordings on Battleground Korea -- mainly music, but there is also a wealth of newsreel footage -- differ because they were produced during the war. These aren't reflections, they're documents of how the country felt as the battle raged.

The box is broken into four acts -- the first disc is Going to War Again; the second, In Korea; On the Homefront occupies the third; Peace and Its Legacies forms the conclusion -- and on each CD, blues, country, gospel, and pop sit alongside each other, delivering an unspoken message that the entirety of the United States of America was in this together. Appropriately, a fair amount of the songs hover around the idea of propaganda: perhaps the songs aren't intended as recruitment, but even the laments about service aren't political protest, they're songs of personal woe. As such, Battleground Koreaplays quite differently than its cousin set Next Stop Is Vietnam, the monumental 2010 set that documented all the upheavals and fallout from Vietnam.

The Korean War wasn't as controversial as Vietnam so this box isn't as rich as Next Stop Is Vietnam, yet it's every bit as compelling for the very reason that the set makes good on the promise of its subtitle. By offering four discs of songs documenting every aspect of the Korean War, Battleground Korea illustrates how deeply the war did cut through America and, in the process, it generated a lot of good singles. Perhaps not a lot of great singles -- by and large, the Achilles' heel is that the songs are too specific in subject to be open for reinterpretation, so they're anchored to their era -- but no matter the genre, the music is strong, simply because it's performed by heavy-hitters who know how to deliver: Lightnin' Hopkins, Fats Domino, B.B. King, Lloyd Price, Vic Damone, Ernest Tubb, Delmore Brothers, J.B. Lenoir, Gene Autry, Jimmie Osborne, Dave Bartholomew, and Merle Travis all contribute memorable musical moments. While the performances are more substantial than the songs, the ephemeral nature of the songs winds up lingering in the memory: this war consumed the imagination of America for three years, then faded away, leaving behind music that is simultaneously ephemeral and weighty.