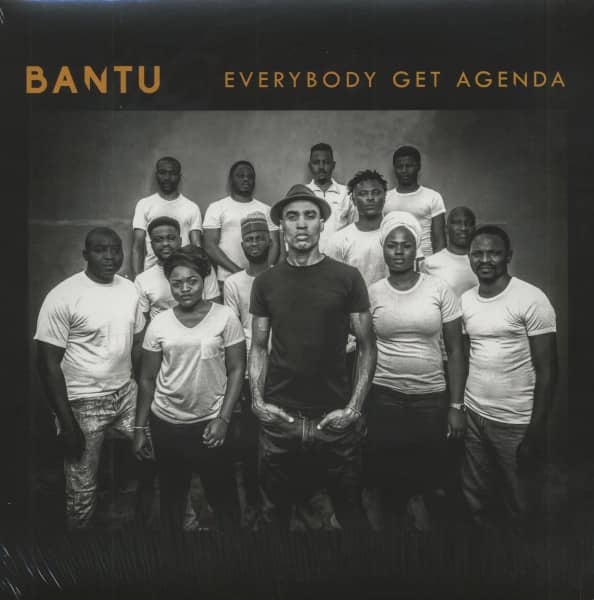 Bantu: Everybody Get Agenda (LP)

Founded back in 1996 by German-Nigerian lead singer ADE BANTU, his brother ABIODUN ODUKOYA and PATRICE, BANTU have since become one of the up-and-coming West African acts transforming the legacy of KING SUNNY ADÉ and FELA KUTI into the soundtrack of the continent of the present day.

ADE BANTU, who is known in Germany as the founder and face of the "Brothers Keepers" initiative, is supported by four other singers, and a three-piece horn section builds perfectly on the extremely versatile rhythm section.
Members of BANTU are active with national greats like ORLANDO JULIUS, DAVIDO, WIZKID or TEKNO, the band won awards like the Pan-African Kora Awards, worked with greats like UB40, TONY ALLEN, PATRICE or GENTLEMAN.

With its versatile and mature songs, "Everybody Get Agenda" is nothing less than a musical sensation - Afro-beat, -funk and -soul flow into each other and meet jazz, highlife, R'n'B, hip hop and Yoruba music, while the often polyphonic songs refer more than ever to the social and political grievances in the home country as well as around the world.
The fact that SEUN KUTI appears on "Yeye Theory" as a guest singer gives this top modern Afropop work the final accolade.