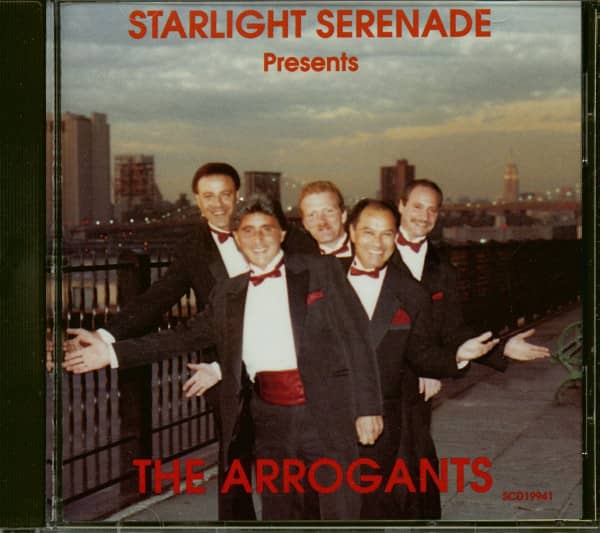 This article is deleted and can no longer be ordered!
Please inform me as soon as the product is available again.
P Secure bonuspoints now
Description Review 0
Description
(Starlight Discs) 21 tracks​  - The Arrogants originated from the Red Hook section of South... more
Close menu

(Starlight Discs) 21 tracks​
-
The Arrogants originated from the Red Hook section of South Brooklyn, N.Y. The original group members consisted of Frank Ayala, Sal Giarraffa, Augie Muizzo, Mike Munoz and Marcial Rivera, The group was discovered, in 1961, during a rehearsal at the neighborhood Junior High School. A friend who was in the recording industry heard them.
In the summer of 1962, The Arrogants recorded "Canadian Sunset" and "Mirror, Mirror" for Lute Records while on a seven week tour of the West Coast. The following year they recorded a remake of "When I Go To Sleep At Night". The recording was produced by the Tokens. In 1966, two group members were drafted and the group was disbanded.

The group was reformed in 1989 when Sal's son, drumming for the Excellents of "Coney Island Baby" fame, mentioned thasI his father sang with The ARROGANTS. This caught the attention of Les Levine who proceeded to contact Sal and initiate the reformation of The Arrogants. Frank and Sal are the only original members, The new members of the group are Brian Emer (baritone lead), Denis Kestenbaum (second tenor lead) and Les Levine (bass lead). The group has been featured several times on the Don K. Reed - WCBS-FM radio doo-wop show including WCBS-FM's 20th anniversary doo-wop celebration. The group has also made several appearances at the United In Group Harmony Association (UGHA) Collectors Shows in North Bergen, N.J. Locally they are booked for six weekends a year at Cousin's Restaurant and Lounge, Brooklyn, N.Y.

$17.22
Starlight Serenade Presents The Arrogants (Doo-Wop Acapella) (CD)
Tracklist
Arrogants, The - Starlight Serenade Presents The Arrogants (Doo-Wop Acapella) (CD) CD 1
01 Walking Along
02 Sh-Boom (Life Could Be A Dream)
03 Adorable
04 Life Is But A Dream
05 Here Am I Broken Hearted
06 Rags To Riches
07 Who's That Knocking
08 Can't We Be Sweethearts
09 Hold Me Thrill Me Kiss Me
10 Get A Job
11 I Promise To Remember
12 I Wish I Could Believe You
13 Tonight Could Be The Night
14 Three Wishes
15 Come Back My Love
16 Church Bells May Ring
17 Oh Baby Don't
18 I Can Dream Can't I
19 The Things I Love
20 Canadian Sunset
21 Zing Went The Strings Of My Heart