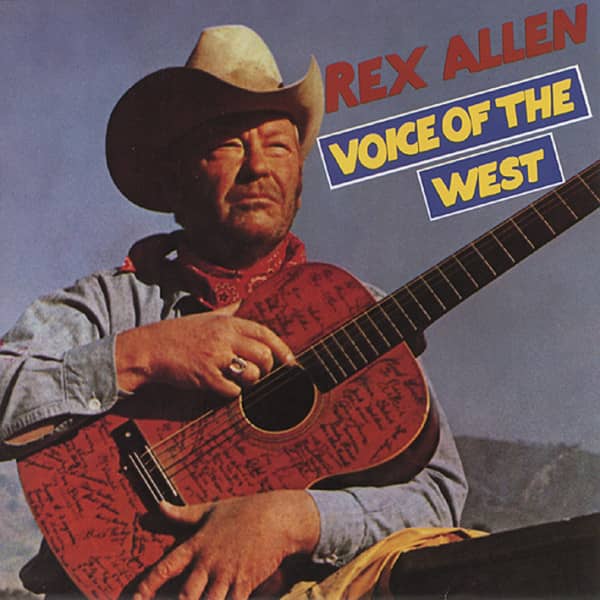 This article is deleted and can no longer be ordered!
Please inform me as soon as the product is available again.
P Secure bonuspoints now
Description
Learn more about Rex Allen
Review 0
Description
1-CD with 8-page booklet, 16 tracks. Playing time approx. 54 mns. While Rex Allen from Arizona... more
Close menu

Rex Allen: Voice Of The West

While Rex Allen from Arizona was riding KoKo, the miracle horse in his B-class western movies from the 1950s, he was also recording for Mercury and Decca. In 1972, Allen moved to Nashville to record nine Western songs (and/or recitations). Furthermore, he also recorded another half-a-dozen contemporary country songs (incl. Merle Haggard's 'Today I Started Loving You Again') for Jack Clement's JMI label.

World famous Western star Rex Elvie Allen was born in Willcox on December 31, 1920, and learned to ride a horse almost before he learned to walk. His early days were on the family ranch 40 miles from town, then at age five the family moved into town after his older brother died from a snake bite.  His father, who played fiddle, bought Allen a small mail-order guitar so the two could play together at local dances. Later known as 'the Arizona Cowboy,' his talent, warmth and friendliness made him a perennial favorite with country music fans everywhere.

After several false starts, his radio career really started nationally in 1945 on Chicago radio station WLS' 'National Barn Dance.' Allen also started recording in that same year, first with Mercury Records and later moving to Decca, Buena Vista and other labels. In the early 1960s he resigned with Mercury and had another hit with Don't Go Near The Indians. In 1950, he made his first motion picture, 'The Arizona Cowboy,' and would star in 18 more in the next few years. He also had his own successful 1960s television series, 'Frontier Doctor.' Younger generations will recognize Allen's unmistakable voice as the narrator of many Walt Disney movies and commercial voiceovers.

Allen died on Dec. 17, 1999, at age 78 and at his request his ashes were spread at the same small park in Willcox where his horse Koko is buried. This Allen sleeper track, Knock Knock Rattle, was recorded in Nashville and came out on Decca in 1956 and has been a favorite for years. It apparently was the only time that Allen decided to cross over the line from country to Rock 'n' Roll. Great job, Rex! Rrrrooof!

$16.92 *
more details
Show all "Rex Allen" articles
Western Music on Bear Family Records Part 1
Western Music on Bear Family Records The original High Noon is among our albums here. There had been plenty of songs in the B-Westerns of the 1930s and ‘40s, but it wasn’t until the marriage of song with story in 'High Noon' that Western film and TV theme songs became a strong feature of our popular culture.
12.03.2017
Similar products Customers also bought Customers also viewed
Similar products
Jim Reeves: The Jim Reeves Radio Show: Monday Feb.24,1958 (CD) Art-Nr.: ACD25002 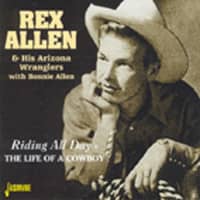 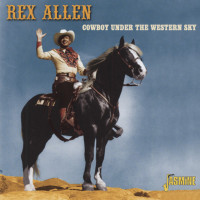 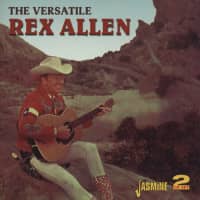 Tracklist
Allen, Rex - Voice Of The West CD 1
01 Tyin' Knots In The Devil's Tail
02 Windy Bill
03 Little Joe The Wrangler
04 When The Work's All Done This Fall
05 Droop Ears
06 Streets Of Laredo
07 The Fireman Cowboy
08 Braggin' Drunk From Wilcox
09 Fiddle Medley
10 Gone Girl
11 Catfish John
12 You Never Did Give Up On Me
13 Just Call Me Lonesome
14 Today I Started Loving You Again
15 Reflex Reaction
16 Moonshine Steer