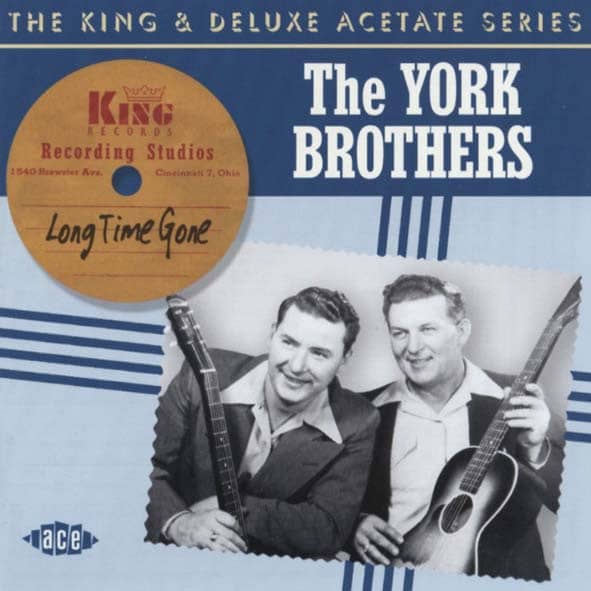 The YORK BROTHERS, Leslie and George, were born in the Cumberland Mountain country of Louisa, Kentucky; George in 1910 and Leslie in 1917. Each gained individual recognition, George as a guitar picker in Denver, Colorado and Leslie who won a talent contest in Lexington, Kentucky. They paired up in the late '30s on radio WPAY in Portsmouth, Ohio.

A paragraph or two cannot possibly accommodate the York Brothers' forty years in country music but rockabilly fans are particularly grateful for their original version of Hamtramck Mama for Detroit's Universal Recording Co. in 1939. After World War II when both men served in the Navy, they settled in Nashville and re-recorded Hamtramck Mama for Bullet. In 1947 they signed with King Records. The Yorks enjoyed best-sellers with New Mississippi River Blues, Gravy Train and Take A Number. They also covered the Dominoes' Chicken Blues and Sixty Minute Man, the Checkers' House With No Windows and Faye Adams' R&B chart-topper, Hurts Me To My Heart.

Everybody's Tryin' To Be My Baby, recorded for Decca in 1957, is commonly associated with Carl Perkins who claimed authorship on his Sun recording. Webb Pierce and Country Johnny Mathis are credited with the York Brothers' variation. In fact, the song was written by Rex Griffin who first recorded it for Decca. (Griffin, the originator of The Last Letter, Just Call Me Lonesome and My Little Red Wagon, influenced Hank Williams' version of Lovesick Blues).

The York Brothers also made records for Fortune, Mellow and Hot Wax while Leslie cut solo sides for Sage and York.