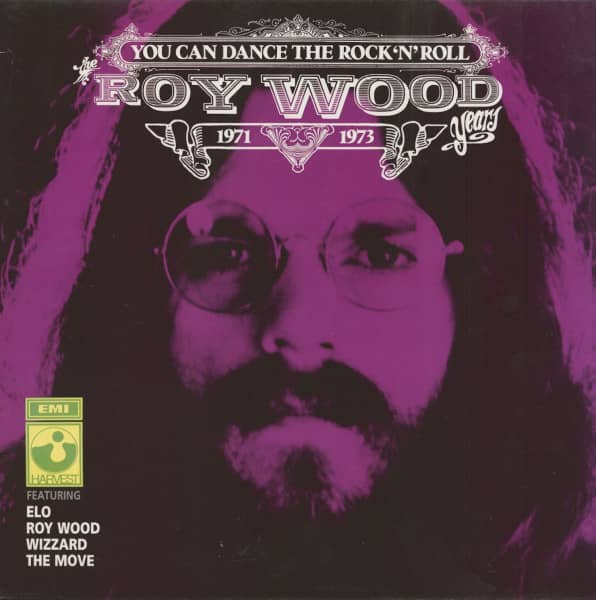 (EMI) 14 tracks - stereo
1970 opened with news of yet another change in the increasingly unstable Move. Since its inception in 1966, the group had lost its bassist and rhythm guitarist, and was now about to part with a vocalist. Although this could have suggested an irrevocable body-blow, survival was assured thanks to its songwriter and guiding light, Roy Wood.

It was Wood who helped form the Move out of several Birmingham Beat groups. Briefly a part of Gerry Levene and the Avengers, Roy's formative years were spent in Mike Sheridan and the Nightriders, before he teamed Trevor Burton (from Danny King's Mayfair Set) with three parts of Carl Wayne and the Vikings; Wayne himself, Chris 'Ace' Kefford and drummer Bev Bevan.

Between December 1966 and August 1969 the Move racked up six hit singles including 'Night of Fear', 'Flowers In The Rain' and 'Blackberry Way', as well as the aforementioned changes. When a new single, 'Brontosaurus was unleashed in March 1970, only Wood and Bevan remained from the original line-up. Bassist Rick Price had been around for about a year, while a replacement for Carl Wayne was found in Jeff Lynne, whose own story can be found on 'Message From The Country' — The Jeff Lynne Years 1968-73'. Lynne's arrival signalled several important changes; an accomplished singer, guitarist and songwriter, he and Roy began immediate plans to reshape the Move's direction. Even before 'Brontosaurus' was released, they had announced plans to replace the old group with a brand-new project, the Electric Light Orchestra.

Over the next year, however, the name 'the Move was kept intact, but by the time the group was signed to Harvest in mid-1971' Pric,. had dropped out of the picture, unhappy with the ELO plan, Although officially still under wraps, the new group had announced the arrival of a French horn player, Bill Hunt, the previous January. In the meantime, 'Tonight' had returned the Move to the top 20 in June, a position consolidated by 'Chinatown' the following October. Sandwiched in between came 'Message From The Country', the Group's fourth and finest album.

Roy's contributions included here are two rockers; 'Ella James' and 'Until Your Mama's Gone'. By the end of that same year, 'The Electric Light Orchestra' had been released to considerably more fanfare, with Wood, Lynne Bevan and Hunt joined by a fifth member, violinist Steve Woolam. The ELO were intended to -take up where the Beatles 'I Am The Walrus' left off. and indeed the basic songs were treated to almost gothic embellishments, including oboes, bassoons, recorders and hunting horns. Rather than being different from say 'Message From The Country', the ELO exaggerated aspects of it, and emerged with another strong collection. Roy's contributions included 'First Movement' (which borrowed heavily from 'Classical Gas.), 'Look At Me Now' and the reflective 'Whisper In The Night', and the new group's future seemed assured.

Meanwhile, the Move continued into 1972, and in May released what became their final single, 'California Man'. A month later, a Jeff Lynne composition, '10538 Overture' was lifted from the ELO album, but within weeks of its release, Roy Wood announced that he was leaving the group, taking Hunt and new cellist Hugh McDowell with him. Lynne, meanwhile was left with the ELO name, Bev Bevan and three other musicians who'd been in the group since its live debut that April. The reasons for the break-up were never clearly explained, but the divergent paths both Wood and Lynne would take showed contrasts in both style and attitude.

In August Roy unveiled his new group, Wizzard, a wild, eight-piece aggregation crammed with its founder's irreverent humour. Rick P6ce returned to join the ELO refugees, bringing with him both drummers from Mongrel, the group he'd been working with, all of which was topped by a twin sax broadside. Three months later Wood established them with 'Ball Park Incident', a rasping hit single which continued the raunch of 'California Man'.

The next two Wizzard singles, 'See My Baby Jive' and 'Angel Fingers', reached No.1 in April and August 1973, a commercial peak Roy would never recapture. The same period saw the release of 'Wizzard Brew', the group's somewhat idiosyncratic debut album. It consisted of a mere six tracks, three of which were marathon workouts, where the Wood grasp of pop melody was submerged in a dense, instrumental forest. Just as 'The Electric Light Orchestra', had its roots its the Move of 'Message From The Country', and, especially, its predecessor, 'Looking On', so this new set referred back to an earlier era; that of 'Shazam', the Move's second album which, paradoxically, also boasted a mere half-dozen cuts. 'You Can Dance the Rock 'n' Roll' is undoubtedly the most immediate track on 'Wizzard Brew', and couples the fire of the group's singles with the experimental touches of the rest of the album. If such activity wasn't quite enough, Roy was also dabbling with a solo career. As early as February 1972 he'd released 'When Grandma Plays The Banjo' to true public indifference, but Wizzard's success prompted a renewed impetus. 'Dear Elaine' appeared in September 1973 and easily outclassed its jokey counterpart. It had been lifted from 'Boulders, his somewhat quirky album, which caught Roy dabbling in several of the styles found in his past groups. At times reminiscent of Wizzard, at others the ELO, albeit in a somewhat lighter way, it was another fun collection, of which 'Nancy Sing Me A Song' was a joy. It was, however, somewhat overshadowed by both Wizzard's profile and Roy's new solo hit, 'Forever', a tribute to the Beach Boys and Neil Sedaka, and different in tone to the LP.

By 1974, however, circumstances had changed. Wizzard moved from Harvest to WEA, Roy stayed at EMI awhile before switching to Jet, but, more importantly, both the quality of Wood's music and its consequent success began to wane. The hits were still there, but they were much less substantial and Wizzard themselves were disbanded in February 1975. In its place came the Wizzo Band, Roy Wood's Helicopters and Roy's continued solo releases; all of which are outwith the contractual scope of this collection, and, in truth, lacked the inspiration this period abounded with. Although it spanned several seemingly contrasting ideas, it's Roy's unerring grasp of pop which pulls it altogether, and despite the different titles, much of this material is interchangeable. It's a gift which sounds as vibrant as ever.