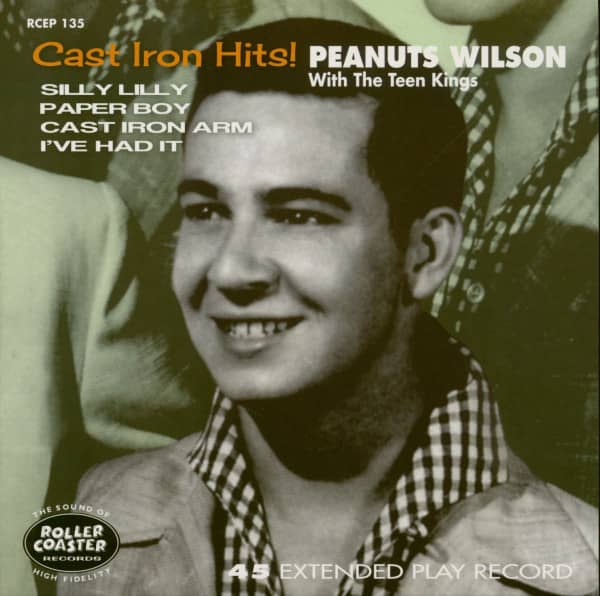 Johnny Wilson was born in West Virginia in 1935, but the Wilson Family moved to Odessa, Texas, whilst Johnny was an infant. At his new home in 119 Drury Lane, he was befriended by his neighbour, Freddie Ray Daniel, a year older than himself. They discovered a shared interest in music; Johnny took up rhythm guitar and Fred learned harmonica, before switching to bass guitar.
Early in 1956 Johnny met Roy Orbison and The Wink Westerners ... this group later evolved into The Teen Kings with Johnny as rhythm guitarist; Roy on lead guitar and vocals; Jack Kennelley, bass; James Morrow, sax and mandolin; and Billy Pat Ellis, drums. Their first version of "Ooby Dooby", recorded at Norman Petty's studio in Clovis, New Mexico, was issued on Je-Wel, before Roy signed to the Sun label. Dissatisfied with the sound at the Sun Studio, Roy brought the group back to Petty's studio where recordings were made that sounded far superior to those recorded at Sun.
Orbison and the group split, and Johnny had his mind firmly set on a musical career, so he continued with The Teen Kings, gigging around Odessa. Lacking a band for his own use, Roy would sometimes sit in on lead guitar, backing Johnny on vocals. The group also had a Saturday night season on local TV, Channel 7, using the name The Drakes.
In May 1957, Johnny returned to the Petty studio, with Roy Orbison, lead guitar; Roy Underwood, lead guitar; Ray Wagner, drums; James Morrow, sax; and Fred Daniel, bass guitar. Fred had joined after the demise of the original group. Two versions of "Cast Iron Arm" and "You've Got Love" were recorded. Who played lead on the released versions is not known but one mystery can be resolved: the 'crazy voice' on "Cast Iron Arm" was that of Fred Daniel, who went into the studio intent on sounding like Droopy, a comic character.

The recordings were issued in November 1957 on US Brunswick 55039 and UK Coral Q72302, using the name Peanuts Wilson. It has been said that Johnny's name was too similar to singer Jackie Wilson. Others doubt Peanuts was a name he would have chosen. Despite the high quality of the recordings, the single failed to sell. Johnny did what he could, playing around the region, but lacked bookings in the more populated cities. None of the group ever heard the recordings aired on radio and it would appear there was little or no promotion by the record company. However, "Cast Iron Arm" did reach the UK Jukebox Top 100, peaking at No 60 in March 1958 and by the mid-70s had become a rockabilly dancehall favourite here.
Johnny made further visits to Norman Petty's Studio, cutting "Silly Lily"; "Paper Boy"; "I've Had It"; "My Heartbeat" and "You've Got Everything". He was consistent in the quality of his recordings, but Brunswick made no further issues. At that time, a lot of local musicians considered Johnny more likely to succeed than Roy Orbison. Whereas Roy remained something of a 'rough diamond' with his Sun releases, Johnny impressed many with his only release, local TV appearances and live gigs.
Johnny probably didn't want to accept a move to a smaller label as he gave up appearances and began concentrating on song writing, remaining in Odessa. Eventually, Johnny came up with his second and final release, this time using his given name, Johnny Wilson. In Hoot Gibson's Coronodo Studio, where he worked as an engineer, he cut "Little Miss Fortune" and "Twilight Zone" for release on Coronodo 001, a small label affiliated to the studio.
Johnny probably realized that no matter how good the recordings, Coronodo was not geared up for having a hit record. Indeed, the label was only known to have had two releases. The second being Jan Lessard's "I Just Met You"/"Faithful Fool" on Coronodo 002, in a style similar to Roy Orbison on Monument. Hoot would later close the Coronodo Studio, and open up the Sound System Studio in his own home, also changing the label name to Sound System. Nashville eventually called, and Johnny went to work for the Combine Music Publishing Company where he was a prolific and successful songwriter. He was still having hits when he succumbed to a fatal heart attack in September 1980.